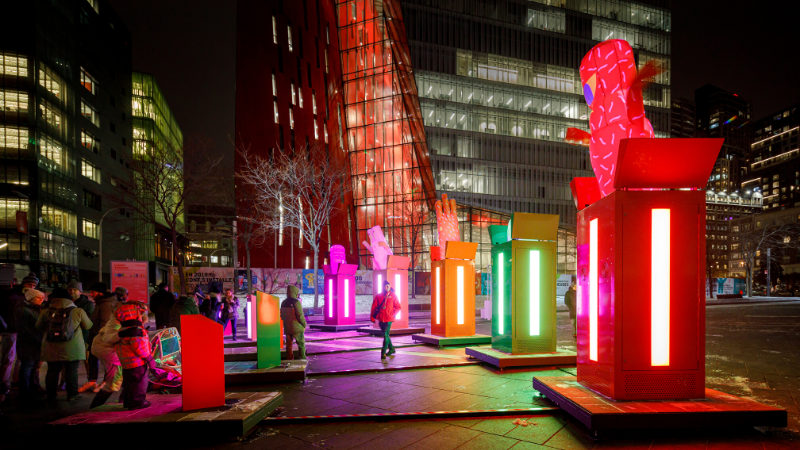 Drop by the Quartier des Spectacles in December and January and get to know Popo, Popup, Popli, Popette and Popotin, five mysterious creatures that love to party! Celebration is the theme for the enigmatic POP! installation, which comes with all kinds of surprises. We spoke with the interactive work’s creators, Thibaut Duverneix and Mathieu Léger, respectively the founder and artistic director of Montreal-based creative studio Gentilhomme.

Why did you decide to participate in the Luminothérapie competition?

Thibaut Duverneix (TD) : We’re often busy abroad, but we wanted to do something in Montreal. The Luminothérapie competition, run by the Quartier des Spectacles Partnership, is an important initiative, and the only one of its kind in Quebec. And I have to admit, the celebration theme was perfect for us!

Mathieu Léger (ML) : From the start, we wanted to do something different from the other playful installations presented in the Quartier des Spectacles. We’ve all seen works like 21 Balançoires (21 Swings), or the seesaws of Impulse. We wanted to come up with a project that’s interactive and crowd-pleasing, but not too cerebral.

How were you inspired by the celebration theme?

ML: We wanted to pay tribute to popular culture in every form: from bals-musette to skydancers – those skinny inflatable men you see outside car dealerships. We also thought of ancient European winter traditions, which very often represent the darkness of winter days, hibernation... Over the centuries, Nordic cultures have built an entire folkloric tradition around costumed creatures that symbolize winter. They were an outlet, helping people make it through the cold months. We thought it would fun to have creatures like that storming the Quartier des Spectacles to help us get through the winter.

TD : At Gentilhomme, we like to play with expectations and levels of interpretation, so we decided to take that classic folkloric world and integrate some more modern elements from North American popular culture, like skydancers, which have a certain tackiness to them, and ennoble them in some sense. It was important to give our creatures distinctive personalities that could charm or disconcert the public.

What kinds of reactions and interactions can we expect POP! to provoke?

TD : POP! is an interactive experience that resembles a dialogue. Each box – each monolith, as we call them – contains a creature that must be convinced to come out. Over the course of the exchange, people will discover the creature’s personality. One might be sarcastic, another angry. They respond to what people say into the microphone and decide to come out – or not! If you get some creatures to come out at the same time they put on a show together.

ML : At first people might wonder, “what are those five big boxes in Place des Festivals?” We hope they’ll be curious enough to explore the installation. If you’re alone or with a friend, you can release one creature. But if you want all five to come out of their monoliths at the same time, you’re going to have to team up and strategize!

TD : You could definitely say that humour and irreverence are in our DNA. At Gentilhomme, we come from all kinds of different background, and we’re united by contemporary art and technology. We don’t put intellectual art on a pedestal as such. We try to give our works a solid foundation, with strong ideas. But we don’t take them too seriously, and give them a splash of humour.

ML : We’re always driven by a desire to create visual surprises, but without resorting to overly intrusive or agressive elements that exists only to be provocative. We create powerful images to attract people, then we make the most of that brief opening to entice them to become part of the work. Because in a society flooded with images, how can you get a spectator or user to stop for a minute? That’s why when Thibaut talks about irreverence, he’s talking about the aspect of the work that might surprise or shock, but that will also convince people that they can take the time to stop and take a closer look. Our creations need to be accessible to everyone of every age, social position or education level and make sure that they all have the same joy even if the reasons are different.

Were there any unexpected difficulties in making this installation?

TD : Yes, of course, because we set the bar very high at the beginning! You might say POP! is the story of a paradox. While the installation seems easy and fun, the technology and research behind it are highly complex. Just because it seems simple doesn’t mean it isn’t complicated!