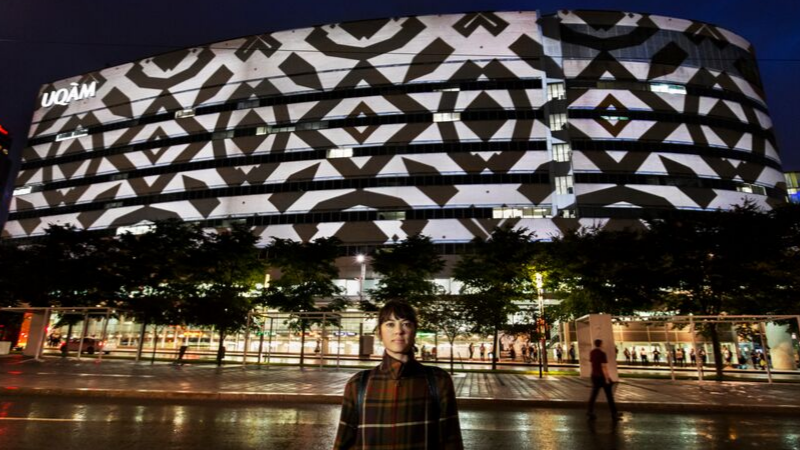 A few months ago, the Quartier des Spectacles Partnership approached Caroline Monnet to create an architectural projection for the Pavillon Président-Kennedy, with full creative freedom. The multidisciplinary artist, riding a career high, will present her first solo animated work, Mooniyang, in conjunction with the Festival du Nouveau Cinéma, starting October 9.

Caroline invited us to her studio to tell us more about the projection and the many other projects she has on the go.

Caroline Monnet : Welcome to my studio! I’ve been here for two years now and I come every day. In fact I spend most of my time here. I do as much painting as drawing and concrete sculpture. I sometimes work with industrial construction materials, sometimes with just a computer. I work in waves, spending all my time on a project before moving on to another, while also juggling a few other project ideas. It’s a very active process, and that’s the way I like it. Using different media lets me explore, challenge myself and get out of my comfort zone.

DIDN’T IT ALL START WITH FILM?

CM : Yes! After studying sociology and communications at the universities of Ottawa and Granada (Spain), I made experimental and documentary films. Then I started exploring painting, sculpture and installations. Recently I took the plunge into fiction by starting work on my first feature film.

WHAT DO YOU GET OUT OF FILM, AS OPPOSED TO VISUAL ARTS?

CM : They’re two different art forms, but in my work they inform each other. Visual art comes with more physical urgency to create an object. The relationship is more immediate, and that’s what I miss when I work in film. But the opposite is also true – when I’m working in the studio, I miss working with a team.

INDIGENOUS IDENTITY IS CENTRAL TO YOUR WORK. HOW DO YOU EXPRESS IT?

CM : My themes are always oriented to debunking preconceptions and stereotypes about Indigenous people, through positive representations in a contemporary and modern context. The ultimate aim is to build bridges between communities.

My own perspective on identity has changed over the last 10 years. When I started out, it was a lot harder to talk about Indigenous identity. It wasn’t something we were proud of, and it wasn’t an issue on the public agenda. The spirit of grievance that I had in my early 20s isn’t the same anymore. Now I’m more interested in self-expression, rather than self-definition.

IS THAT TRUE FOR MOONIYANG?

CM : Mooniyang is the Anishnaabe name for Montreal. The work explores the territory of Montreal in an abstract way, through the marks left by Indigenous expertise that have long been ignored and suppressed. The façade of this building is interesting, because you have to play with an already divided architecture. Filling the concrete surface with traditional Anishnaabe patterns, pulling them apart and putting them back together again in a kaleidoscopic black and white animation with subliminal messages, all in the heart of Montreal, was a wonderful challenge!

WHAT WERE THE CHALLENGES YOU FACED WHILE MAKING MOONIYANG ?

CM : The challenges were mainly technical, which is common with most media art. I worked with Frances Adair Mckenzie, who’s a frequent collaborator, and she was a great help with all the technical aspects. With animation, there’s also the challenge of finding the right pace for transitions, because everything is moving. It all has to be fluid, so that the viewer has a sensory experience that taps into the subconscious and doesn’t notice the beginning and the end.

WHAT DO YOU WANT THE VIEWER TO FEEL ?

CM : First of all I want them to stop and take the time to watch the entire work. I hope it will be a revelation, a sensory journey. I hope that at the end of the experience they will feel full of energy to do great things and even change the world. I see Mooniyang as a transitory passage. An adventure with a before and an after, that will inspire people to shift from inaction to action.

WHAT’S THE CONNECTION WITH THE FESTIVAL DU NOUVEAU CINÉMA?

CM : The FNC programmed my very first film in 2009, and we’ve maintained a relationship ever since. They’re great friends! It’s an important festival on the Montreal scene. Their mission is to present films that break with convention. It’s catnip for a visual artist like me to be part of the festival, and that’s why I was happy that my projection is associated with it.