Nuits d'Afrique VILLAGE IN THE HEART OF THE QUARTIER DES SPECTACLES 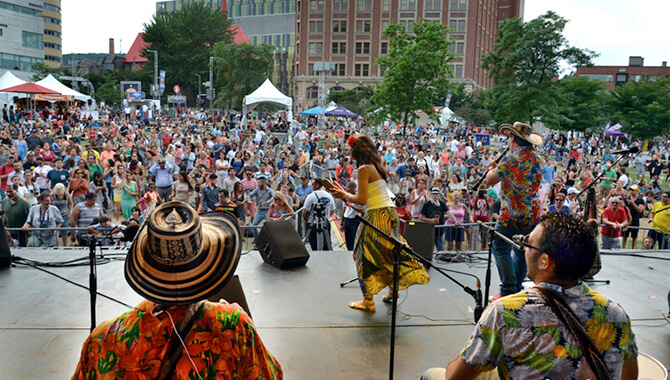 Text written by Ralph Boncy, journalist and music critic for Voir and Ici Musique / Radio-Canada. He is a songwriter and the author of books on the popular music of Haiti.

When the jazz is over, an African village appears in the heart of downtown Montreal. For the sixth year in a row, the music, colours and flavours of the Festival International Nuits d’Afrique will come together in this inviting open-air space, broadening our horizons…

A fine summer day. One Monday in mid-July, I pick up my daughters from their downtown day camp. Hop! and we’re riding the metro. After just two stops, we’re at Place des Arts and heading for the Président-Kennedy exit, behind Salle Wilfrid-Pelletier. The kids can’t believe their eyes. 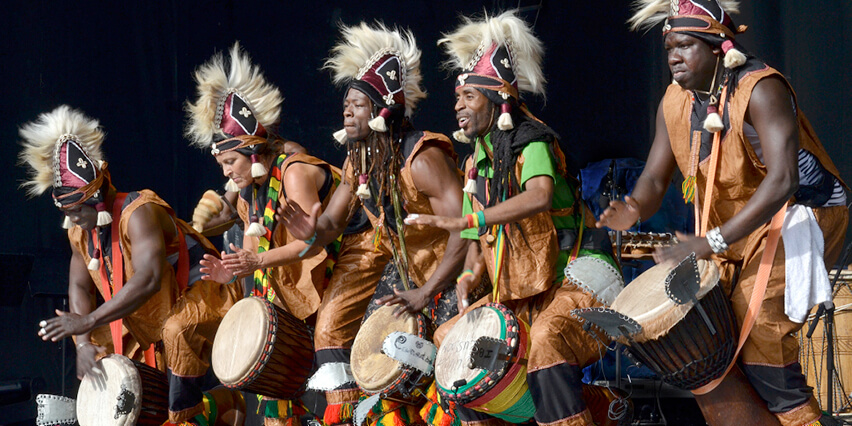 A wonderful world within my city

There, under the blue sky and brilliant noon sun, I direct their gaze with a simple wave of my hand: a little village. I feel a bit like a magician. We cross the street, heading east across Saint-Urbain, and in a minute it’s as if we’re in Africa. Colourful booths and lavishly decorated stalls mark off the space on the garden side, facing the large, black, silent stage, awaiting musicians and the next party. In the middle of the “savannah,” we spot a band of lively little men, decked out in yellow, green and red and carrying small drums, and soon we hear a Brazilian beat. They’re capoeira dancers – deliriously happy ones, grinning ear-to-ear.

Pure magic! This is going on in the heart of my city, and it’ll continue until the last stroke of midnight. Here, where the jazz fest plays the blues (for more than 25 years, this has been the site of the jazz festival’s blues-rock stage), a crowd has gathered to listen and dance to world music. 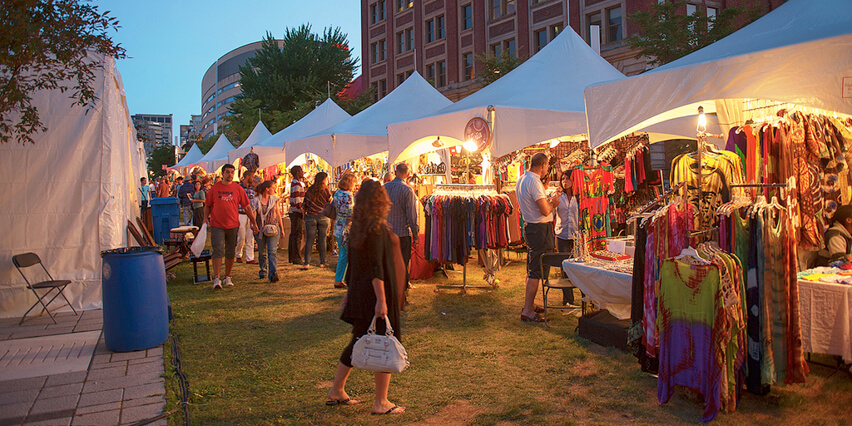 Lamine Touré, the Guinea-born founder of Club Balattou and the Nuits d’Afrique festival, is the man who gave Timbuktu Market its evocative name. It’s a cultural crossroads: a series of vendors, artists and cooks, packed with talented artisans, tireless volunteers and plenty of delicious spices. The Nuits d’Afrique village is an enchanted place that celebrates diversity, and it’s also home to open-air workshops, DJ sets, a kids’ village, dance and kora lessons, and free screenings both serious and fun inside the TV5 Sphere.

The crowds gather for world music!

Place Émilie-Gamelin was Nuits d’Afrique’s first home, in the 90s, before the festival moved to the Quartier des Spectacles Parterre in 2001. Since then, the event has kept on growing, both in attendance and in the number of concerts. In recent years, Sunday night headliners like Kassav’ from the French Antilles, Tabou Combo from Haiti, Orquesta Aragon from Cuba, Meiway from Côte d’Ivoire (last year) and the Afrique en Cirque collective, two years ago, all drew bigger crowds than expected, sometimes more than 20,000 people. The tightly packed crowds gleefully danced the konpa, zouk, charanga or zoblazo. Lots of happy people!

And this year – for the 31st annual edition of Nuits d’Afrique, which claims the title of the world’s biggest event of its kind – there will be six days of free activities and concerts filling the back half of the festival, from July 18 to 23. The impressive line-up of 28 free outdoor concerts will conclude with Colombia’s Tribu Baharù, preceded by the electrifying Wesli, our city’s proud standard-bearer on the world-music scene. From July 18 to 22, you can also head to the TD-ICI Musique stage for the thrilling return of Admiral-T from Guadeloupe; Seun Kuti & Egypt, one of Nigeria’s greatest bands; and Congo’s Mbongwana Star, billed as “the most thrilling new music coming out of all of Africa.”

And there you have it. A tour of Africa in a few city blocks, no plane tickets required. My girls and I absolutely love it!