Holoscenes or the spectacle of the flood 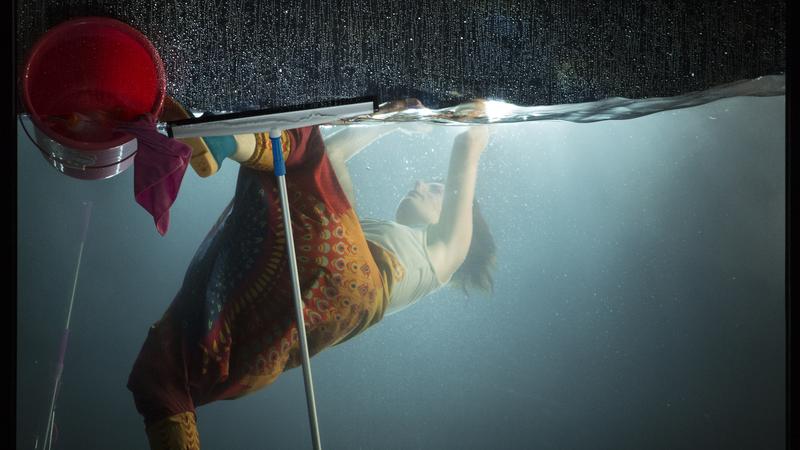 While climate change regularly makes the headlines, it is much more rarely the subject of performance art. But the topic is at the core of Holoscenes, which will be presented from May 25 to 29 on Esplanade Tranquille in the Quartier des Spectacles as part of Festival TransAmériques (FTA), after having been exhibited in New York, London and Abu Dhabi, among others. Montrealers will see a giant aquarium containing people acting out scenes from everyday life. As the performers are submerged by a sudden flood, they find themselves forced to adapt.

We spoke with the installation’s creator, American artist Lars Jan, and Anne-Catherine Lebeau and Marianne Lavoie, respectively the Executive Director and Eco-design Advisor and Trainer from Écoscéno.

CAN YOU GIVE US AN OVERVIEW OF THE PIECE?

Lars Jan: Holoscenes is both a public performance and a 360-degree rotating installation. Inside, we see artists engaging in various activities. As we were building the project, we asked the public to send us videos, and we received over a hundred depicting the daily lives of people in around 40 different countries. We selected a few for the piece, including one showing a man selling fruit in southern India and one of a person reading the newspaper, and developed a choreography around them to incorporate them into the performance.

WHAT INSPIRED YOU TO DEVELOP THIS INSTALLATION?

LJ: I started working on Holoscenes in 2011. At the time, I was intrigued by news of what the media described “the worst flooding in 100 years.” Yet, I had the impression that there was a report of “the worst flooding in 100 years” nearly every month. This prompted me to do some research, as I was not yet an environmental activist. I discovered that there was a debate among geologists. While the prevailing belief is that we are currently in the Holocene geological epoch, some scientists argue that we recently entered a new age, the Anthropocene, in which humans have become the most powerful influence on the Earth. I found this debate fascinating, and I was drawn to the word “Holocene,” a homophone of “hollow scene.” This gave me the idea to develop a performance for a hollow stage filled with water.

HOW HAS THE PUBLIC RESPONDED TO YOUR WORK?

LJ: The experience is both contemplative and visceral – there’s something terrifying about seeing a human being completely submerged in water. However, seeing people isolated in an enclosed space, confined even, no longer has the same impact as it did before the pandemic. That said, the emotional impact of the performance varies from person to person, as everyone interprets what they see differently. I have heard adults say that it’s about death, children say that they saw mermaids, etc.

CAN YOU BRIEFLY TELL US ABOUT THE TECHNICAL ASPECTS OF THE PROJECT?

LJ: This is a major project that required a lot of research and development. Initially, we didn’t know how we would do it, but we were committed to it being safe. So, to get it right, we turned to hydraulic engineers and specialists who had worked with Cirque du Soleil on the show Ô.

Marianne Lavoie : On our side, we also had to explore various options and ensure that we could host Holoscenes in the best possible conditions, specifically while respecting the environment. For example, we wondered whether the water needed for the performance could be reclaimed and used for other shows... In the end, we decided that the water, which is chlorinated to the minimum level required to protect the health of the performers, will be transferred to the city’s tanker trucks so that it can be used for watering Montreal’s streetside vegetation. The greenhouse gas emissions from the preparation and presentation of Holoscenes will be accounted for, and offsets will be paid to the non-profit organization Eau Secours, which works to limit water waste. It was important to us that the performance serve as a benchmark in responsible sourcing.

WHY IS IT IMPORTANT TO ADDRESS CLIMATE CHANGE THROUGH ART?

Anne-Catherine Lebeau : The role of art is to spark discussion. We realize that behavioural changes require emotional investment, and I think art has that additional and essential component that’s missing from theoretical models. Not only is Holoscenes presented in a way that respects the environment and our natural resources, it is also a public work, free and accessible to all.

LJ : also think art helps start conversations about this important topic and encourages people to learn. Holoscenes is not trying to scare people. I think we’re all anxious enough as it is. But it represents another way to communicate and think about solutions.

ACL : The symbolism of water is very strong. It encourages us to become aware of the reality of climate change and reflect on our own water consumption. By limiting the ecological footprint generated by the performance itself, we are setting an example and showing that it is always possible to be proactive. Besides, it has been proven that action is the best remedy for ecoanxiety!

Holoscenes as part of the Festival TransAmériques (FTA)
From May 25 to 29, Esplanade Tranquille - Free