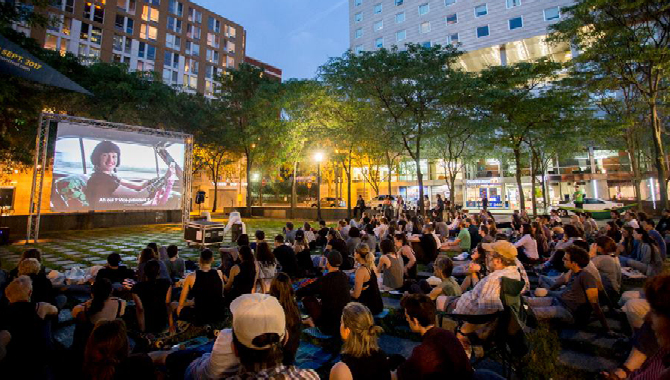 Watching movies outdoors is one of the best things about summer in the city. With this rethought and refreshed 14th edition, Cinéma urbain will delight audiences in Place de la Paix, in the heart of the Quartier des Spectacles, every Tuesday until September 3.

This year, Cinéma urbain celebrates music’s unique role in film. Each screening will be accompanied by a musical performance, from classical to electronic, jazz and Indigenous music. Enjoy the show!

American filmmaker and photographer Khalik Allah incorporates elements of photography into this poignant documentary, a heartfelt tribute to his mother’s homeland, Jamaica, and its women. The feature will be preceded by two animated shorts by Haitian-Canadian filmmaker Martine Chartrand and a trippy performance by experimental artist R41ÑB0W TR4$H.

The Hunchback of Notre-Dame

Don’t miss this classic version of the Hunchback of Notre-Dame, based on Victor Hugo’s masterpiece. For this screening of this epic silent film, directed by Wallace Worsley in 1923, local pianist and composer Gabriel Thibaudeau will play the dramatic score live, accompanied by soprano Gerda Findeisen.

Are you a fan of gory movies who’s also into 80s nostalgia? This is your night! Directors François Simard, Anouk Whissell and Yoann-Karl Whissel present a wacky horror comedy in which a young comic-book fan tries to survive nuclear winter. A Fantasia Festival hit, this is the first feature by a most promising filmmaking collective.

The teweikan is the traditional drum central to the music of several First Nations. This documentary by Kim O’Bomsawin reveals the vastness of Indigenous music, which crosses over with country, rap and electronica. Singer Shauit, featured in the film, will warm up the audience with his pop and reggae tunes.

Army Of Lovers In The Holy Land

Asaf Galay’s documentary, shown here in its Canadian premiere, follows the career of a Swedish pop group that scored a bunch of European hits in the 90s, while getting embroiled in a series of controversies, often triggered by their fixation with sex and religion. The band’s most famous member, Jean-Pierre Barda, will be on hand to field questions from the audience.


The General + The Railrodder

With the pianist Roman Zavada
August 20

The General is considered Buster Keaton’s masterpiece. The legendary actor and director made the film in 1926, setting it during the US Civil War. The story follows the adventures of a railway engineer who is prepared to go to any lengths to protect his locomotive as well as his true love. Ukrainian-Canadian composer Roman Zavada will give this classic film a live improvised soundtrack! The film will be followed by one of the last movies featuring Keaton, The Railrodder an NFB production set in Canada.

With the historian Philippe Spurell
August 27

This screening of this classic musical from 1936 – starring one of the most famous child actors of all time, Shirley Temple – will be preceded by a themed cocktail at Café SAT. Everyone is invited to don their finest 30s attire for an old-fashioned night at the movies. The host for the evening will be Philippe Spurell, a film historian who has been organizing themed events for more than 20 years.

With SMAC the Music
September 3

This film/concert event is part of the Scoring 4 Polish Directors series produced by the Krakow Film Music Festival. The evening is focused on the works of the great filmmaker Andrzej Wajda and the work of acclaimed composers like Wojciech Kilar and Krysztof Penderecki. It will be preceded by a string-trio performance by SMAC the Music, and followed by a short film about iconic Canadian filmmaker and composer Norman McLaren.