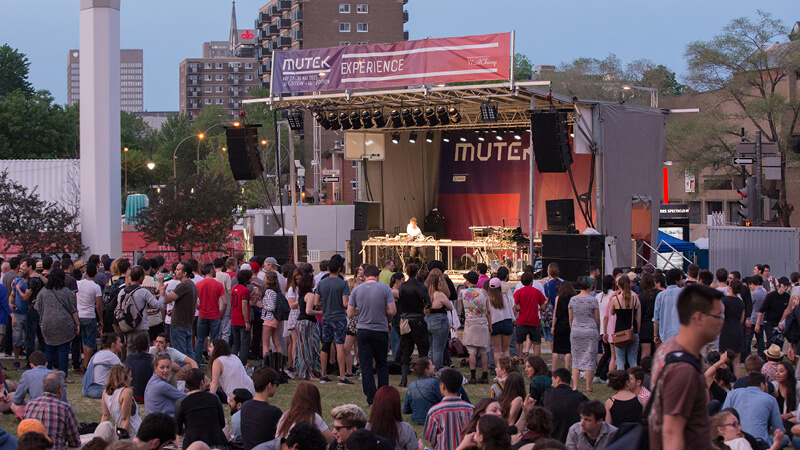 There are two sides to electronic music: the DJs who play it from behind their turntables, and the people who make it. You’ll find the second group at MUTEK, the international festival of digital creation and electronic music.

Until 5, the 17th annual MUTEK festival presents artists in action, showcasing their work and sharing their latest sounds. Your role: open your ears and eyes and enjoy as many immersive experiences as you can.

MUTEK’s executive and artistic director, Alain Mongeau, talked to us about the festival’s different discovery and experience zones.

Getting to know MUTEK

The Parterre of the Quartier des Spectacles
June 2 to 4

For the second year in a row, MUTEK presents a free, outdoor exploratory experience. “It’s a sampling of what the festival presents in the indoor venues, and it’s just the tip of the iceberg of the full range of experiences,” Mr. Mongeau explains. On Thursday evening, the Montreal collective Bolting Bits (Blue Hawaii, Vertigo inc., Frits Wentik) will present both live music and DJ sets. On Friday afternoon, techno will be front and centre with the Booma Collective (Burundi Index, Lee Gamble). “The space is inviting and inclusive. The key word with the Parterre is accessibility. We are trying to attract people who aren’t familiar with MUTEK, as well as making this the place where festivalgoers congregate and share their experiences.”

A taste of the latest

MUTEK is once again setting up its headquarters at the MAC, and the museum will also host the festival’s Nocturnes MUTEK events. Over five evenings, ten artists will perform on two stages. “The programs are a very broad overview of what’s happening on the local and international scenes,” says Mr. Mongeau. This year, nine artists from Europe’s Shape collective – a group of 16 festivals showcasing the avant-garde in the Old World – are among the featured performers. “This will be an inside look at what’s happening in today’s European underground.” The artists include Essaie pas, Kara-Lis Coverdale, Jlin, Lorenzo Senni and Spatial, among others.

With the Passport Light, festivalgoers can attend five Nocturnes MUTEK evenings plus two parties at the Métropolis.

Immerse yourself in sounds and images

MUTEK’s A/Visions series is all about uncommon immersive experiences by international artists working with both sounds and images. “The audience is drawn into a physiological experience with the sound, accompanied by often grandiose images.” Each of the two evenings has three sets by three artists. “We have the crème-de-la-crème in the field,” Mr. Mongeau explains. There’s the North American debut of the audio-visual duo Nonotak, as well as Dasha Rush and Stanislav Glasov (alias PRCDRL), who will perform the world premiere of Dark Hearts of Space, presented in collaboration with the Banff Centre.”

The festival includes two big parties. On June 3, festivalgoers will enjoy a techno-oriented evening. The next evening, revellers are invited to groove to electronic music all night – until 6 a.m. “It’s the festival’s climax,” Mr. Mongeau notes. “All the festivalgoers gather for an unforgettable night presented by the Red Bull Music Academy.”

Don’t miss it – Boiler Room at the SAT

Boiler Room, which records and streams exclusive, intimate performances by artists at various venues around the world, is returning to Montreal. Shigeto, Sepalcure, Iron Galaxy and Martyn will perform for a fortunate few in the Satosphère at the Society for Arts and Technology. It’s free, but reservations are required.