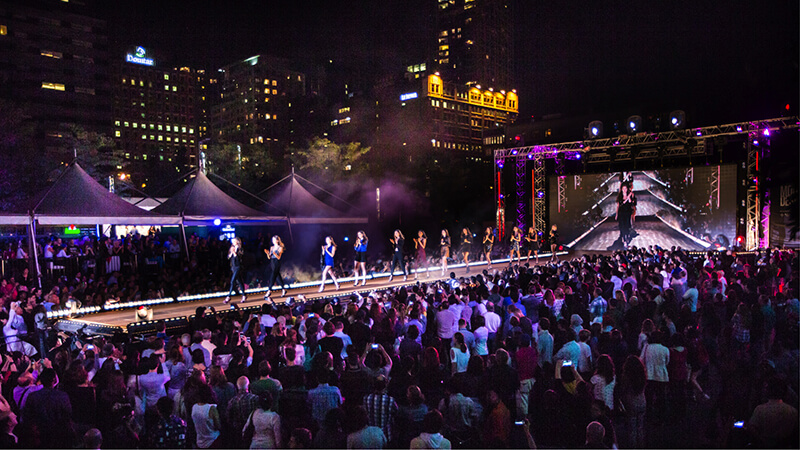 Last year, the Fashion & Design Festival set up its runway in the Place des Festivals for the first time, making this year the festival’s second in the Quartier des Spectacles. The Quartier provides a perfect setting for the event to fulfill its mission of making fashion accessible to everyone, according to Geneviève Born, who has been the event’s spokesperson since 2008. This 15th anniversary edition of the Fashion & Design Festival includes many runway shows featuring Montreal talent, guest speakers, live music and free activities.

Geneviève Borne guided us through the festival’s history and this year program.

How has Fashion & Design evolved over the last 15 years?

The festival has changed enormously and will keep on changing. Fifteen years ago, when its home base was at the corner of Saint-Laurent and Prince-Arthur, the festival was much smaller. For the first few years the event took place during the Formula 1 Grand Prix weekend. Eventually it became apparent that the festival had a distinct identity and was attracting its own audience. After several years on McGill College Avenue, Fashion & Design moved to the Quartier des Spectacles last year. It’s a natural fit for us.

Fashion has grown more accessible over the years…

Yes, and one of our festival’s missions is in fact to make fashion accessible to all, to help everyone learn about the latest trends. In my opinion, it’s all about bringing fashion out into the street, and making it an easy-going, open-air experience. That’s why we invite everyone to come to the Place des Festivals for our many free activities.

As well as plenty of runway shows and live music, the big runway will host two major events.

Yes. To celebrate our 15th anniversary, we will close the festival with a runway show called Number 15 (August 22, 9:30 p.m., Place des Festivals), which is a tribute to our event’s history, looking back at the highlights. The Generation Z runway show (August 21, 9:30 p.m.) is a celebration of our youth. We wanted to give exposure and a voice to people born in 1995 or later. We held a big open casting call to choose the models for this show. It’s great to see people on the runway who aren’t models, but who have style and charisma to spare! It’s all part of our desire to show some diversity on the runway.

Once again this year, you have an impressive list of guest speakers who will spill their secrets…

As much as the festival is democratic and aimed at the general public, it’s also a chance to gain some in-depth knowledge from the leading experts in the fashion world. Hatmaker Stephen Jones (August 17, 7 p.m., Musée d’art contemporain), who has worked with Marc Jacobs and Vivienne Westwood, will launch the series. He is also the curator of the FDM Collections runway show (August 19, 7 p.m., Place des Festivals). Stephen has selected three labels that he sees as representing the Quebec identity: Harricana by Mariouche, Bodybag by Jude, and Hip and Bone. Patricia Field (August 18, 7 p.m., Musée d’art contemporain), the stylist from Sex and the City, who has also helped democratize fashion, will talk about her work. There will also be a discussion of store design with several architects, including Gilles Saucier (August 21, 5:30 p.m., Musée d’art contemporain).

The festival is not just about fashion, but also design. Can you say a few words about the design section?

Designer Jean-Claude Poitras is this year’s design curator. He has selected several designers whose work will be visible at the outdoor site. Once again this year we’ve partnered with the Conseil de l’industrie forestière du Québec, so design pieces made of wood will be everywhere, including the runways, parklets and patios. It shows how much can be done with this raw material that’s so important to Quebec.