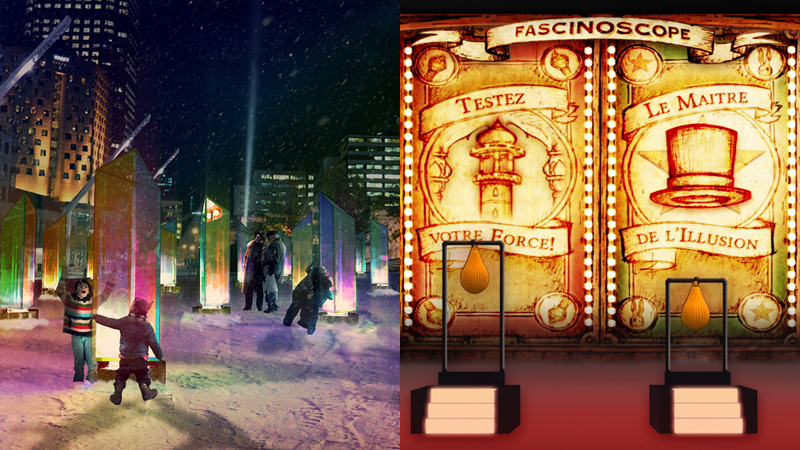 For the fifth year in a row, the Quartier des Spectacles is going to brighten your winter with the Luminothérapie event. The two winners of this year’s competition, Prismatica by RAW Design and Fascinoscope by Lüz Studio, will light up the Place des Festivals and the Quartier’s video projection surfaces respectively. The winners were announced on October 16; here are some details about the two highly original works.

For the first time in the competition’s history, a designer from outside Quebec will have the honour of creating an interactive installation for the Place des Festivals. The Toronto-based architecture firm RAW Design – chosen from among 45 competitors – will present a giant kaleidoscope called Prismatica.

Comprised of 50 colourful, two-metre tall pivoting prisms, the installation allows visitors to explore what can best be described as a multi-coloured ice palace. Glimmering under natural light by day and atmospheric lighting by night, the prisms will fill the Place des Festivals with overlapping transparencies, patterns and reflections. The installation also features an ambient soundtrack.

Visitors can play with the colourful patterns by turning the prisms as they reflect every colour in the visible spectrum. The view will change constantly depending on the position of the light source and the observer. It’s one big kaleidoscope, with Montrealers at its centre!

Imagine an early 20th century carnival given a digital remix. That’s Fascinoscope, the winning project in the video-projection section of the Luminothérapie competition, chosen from among 10 proposals.

Each of the eight projection sites will feature a singular world based on different parts of a fairground. For example, UQAM’s Pavillon Président-Kennedy will become a big top with death-defying acrobats, the Grande Bibliothèque will gave a carnival freak show on its walls, and UQAM’s Centre de design will feature a Moulin Rouge-style cabaret environment. Théâtre Maisonneuve, the UQAM bell tower, Hôtel Zéro1–Place de la Paix, Cégep du VieuxMontréal and the area outside Saint-Laurent metro station are the other projection sites.

The heart of the Fascinoscope experience will be set up outside Saint-Laurent metro station, where pear balls fitted with motion sensors will allow visitors to interact with the projection. You are invited to test your strength and accuracy with four two-minute games: Poulets en cavale (“chicken run”), Les fulgurantes machines volantes (“flying-machine frenzy”), Le maître de l’illusion (“master of illusions”) and Le charmeur de serpent (“snake charmer”). Get ready for some big-time fun!

Mark your calendar: the Luminothérapie works will be officially unveiled on December 10 at 5:30 p.m., complete with surprises!