Why does Montreal love its downtown festivals so much?

The coloured illuminations have painted the sky and the crowds have gathered yet again at the feet of the skyscrapers. For a third straight year, the Quartier des spectacles is host to magical moments in the heart of downtown, making Montrealers' chests swell with pride.

"Many European cities have had public gathering places at the center of town since they were founded, but it's a feature that has been neglected in major North American cities" explained Robert Chicoine, president of the Ordre des Urbanistes du Québec.

"It's a place that attracts international artists to Montreal, but the project itself has developed an international reputation. We present at conferences around the world about the Quartier des spectacles." 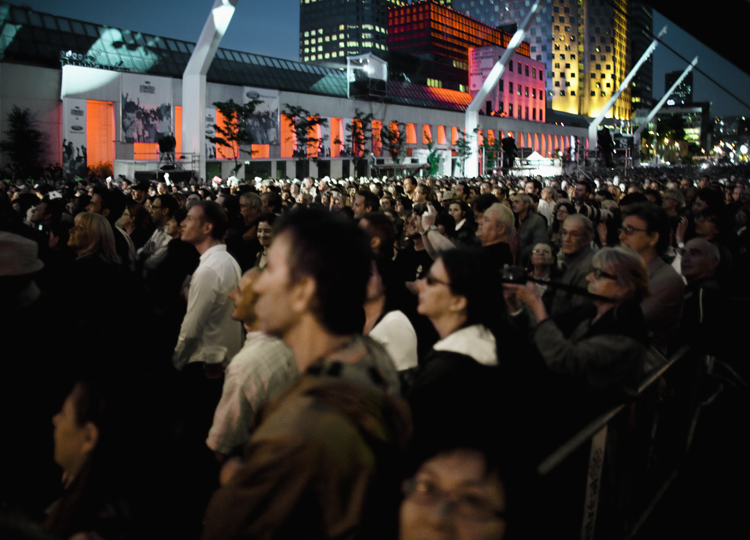 In 1986 the founder and artistic director of the Festival International de Jazz de Montréal, André Ménard, received a tempting invitation. It was the first glimmer of what has become an enormous project: Place des Arts director Guy Morin suggested that the festival pitch its tent in the the "backyard" of his complex, a site that would subsequently become the nerve centre of Montreal culture.

"You have to remember that thirty years ago, performances in Montreal stopped on June 1 and only started up again after Labour Day. It was a dead town. Festivals almost invented Montreal summers" emphasized Mr. Menard.

Since 1989, Place des Arts has been the centre of Jazz Fest activity. There, all three of the festival's programming concepts -- street activities, outdoor shows, and indoor performances -- have been able to expand, with plenty of breathing room available within the unifying framework of downtown Montreal.

"Outside, the social fabric is quite diverse. There's families, but there's also people down on their luck, students and the ethnic communities, who join us at different times. They all show up for a great party that brings everybody together."

With the Quartier des spectacles spreading Montreal's cultural reputation and the Place des Festivals as a major gathering space, the old "city of a hundred steeples" has taken a clear lead in bringing the individual into its urban planning and development.

"There's been a real surge of interest in using outdoor public spaces for urban-development projects in major cities around the world. The Quartier des spectacles has made Montreal a model for them to follow" concluded Robert Chicoine.