Montreal is still at the heart of the action! 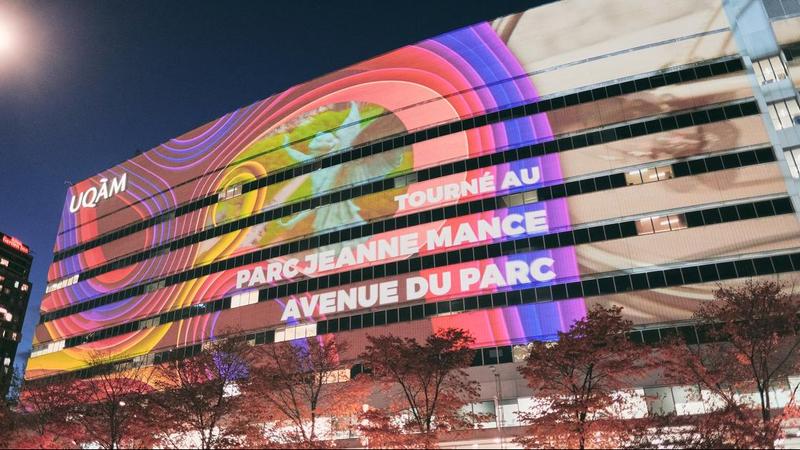 Until November 14, the 27th edition of the CINEMANIA Festival presents ACTION MONTRÉAL!, an immersive show celebrating the city’s status as an internationally acclaimed filming location. The exhibition takes you right onto a movie set. Project manager and curator Alizé Honen-Delmar explains what’s special about this unique event.

What’s the best way to experience ACTION MONTRÉAL!, in your opinion?

It’s a fun, immersive experience in the form of an exhibition in Place des Festivals, accompanied by a video projection and a podcast series. It pays tribute to the city and the movies. The audience is transported to some of Montreal’s iconic filming locations and shown what goes on behind the scenes thanks to an array of screens set up in Place des Festivals. Each evening starting at 5 p.m., the façades of the Wilder Building and UQAM’s Pavillon Président-Kennedy light up with a video projection that guides viewers through sites around the city where Quebec and foreign films have been shot. There are clips from such films as Hochelaga, terre des âmes by François Girard, Nadia, Butterfly by Pascal Plante and Une révision by Catherine Therrien, the opening film for this year’s CINEMANIA Festival. The original projections, created especially for this event, evoke Montreal’s topography through an organic, colourful interplay of lines. People will discover not only a variety of films, but the local streets and parks where they were filmed.

How does the exhibition’s audio component fit in?

We wanted the exhibition to be accessible to everyone, and to cover the entire city. It was also important not only to feature members of the local industry – actors, directors, producers, critics – but to involve them in the project. So we developed a series of podcasts based on testimonials, anecdotes and film-set stories, with artists such as Monia Chokri and Jean-François Pouliot. The audio walk, which will continue until July 2022, has 13 stations marked by panels with QR codes, at various locations where the selected films were shot. That said, the heart of the show is still the Quartier des Spectacles, where we wanted to create a stimulating walk. Place des Festivals is equipped with three screens, and two of the 16 podcasts are meant to be heard there.

What challenges did you face in preparing the exhibition?

The first and most important step was to select the films. We wanted to highlight the diversity of the works filmed here, while properly managing the delicate matter of copyright. We wanted to showcase Quebec films and international productions, from indie films to blockbusters. That’s why the films included are so varied – everything from C’t’à ton tour, Laura Cadieux by Denise Filiatrault to The Curious Case of Benjamin Button by David Fincher, from Luc Bourdon’s La mémoire des anges to Bryan Singer’s X-Men: Apocalypse. It was really tough to decide which films to include, but we consoled ourselves with the thought that this is just the first time around and we’ll definitely be doing it again!

What makes Montreal such a popular city for filmmakers?

Montreal is a top-tier choice for a few reasons. First, unlike most large North American cities, the city has plenty of open, convenient and inspiring locations. It’s also a good destination for financial reasons, including the tax credits available to many productions. But we also have to mention the incredible expertise and talent that our local film people are so famous for – international producers truly appreciate them. Lastly, it’s worth noting that Montreal is a bit of a chameleon. It can pass for Brooklyn, Paris or even Russia!

On a more personal note, did the project change the way you see Montreal?

Yes, it actually did! I work in the industry, so I already knew how important Montreal was for our film industry, but I didn’t fully grasp its international reputation as a city for filming. Now when I walk around, I not only appreciate the uniqueness of each street corner, I imagine how it could be used as a film location!

ACTION MONTRÉAL!
As part of the Festival CINEMANIA
Until November 14, 2021