Hip-hopéra, Carmen : freedom in the city 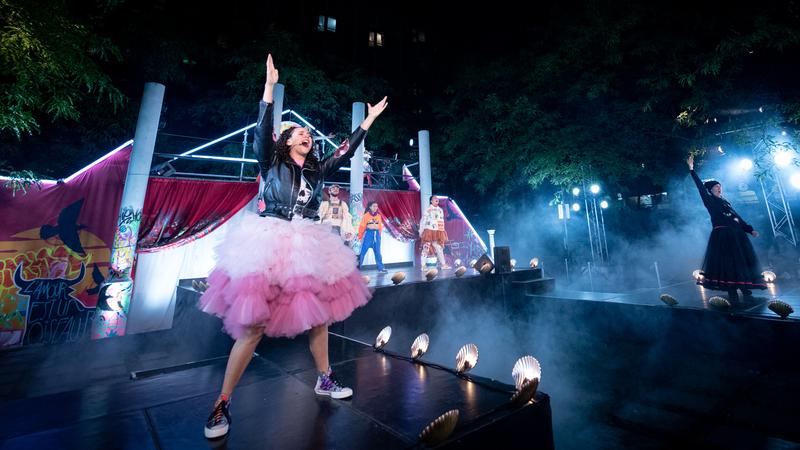 Carmen is liberated, Carmen is sexy, Carmen is Bohemian. And now Carmen can be found in an urban hip-hop setting that happens to be perfect for her. Director Louis Tremblay of local theatre company La Tête de Pioche puts the heroine of Bizet’s famous opera in a gritty urban world in this larger-than-life open-air show in Place de la Paix.

When the Quartier des Spectacles Partnership and three partners – the National Theatre School, the Society for Arts and Technology [SAT] and the Fashion & Design Festival – approached Louis Tremblay with the idea, they were keen to seize a rare opportunity to produce a large-scale street performance that would further promote street arts presented in public spaces. Although Quebec has many talented street artists, major productions are rare, for want of resources and recognition for the outdoor arts. Which brings us to Hip-hopéra, Carmen, with its large, multi-tiered stage in Place de la Paix, brought to life by a multi-award-winning team featuring classical singers (Michèle Motard, Rose Naggar-Tremblay and Pierre Heault), one of Quebec’s favourite rappers (Sans Pression), and artists from the worlds of pop music (producer Loïc Thériault) and comedy (dramaturge Danis Durocher). Not to mention the stylists from the fashion world and their spectacular costume designs (Randy Smith, under the direction of Chantal Durivage and assisted by Emmanuelle Néron).

“We tell the story of Carmen in 35 minutes flat,” the director reveals. “We chose to make Carmen a feminist, in open revolt against the established order and on a relentless quest for freedom. Of course, the opera does tell a passionate love story, and we will explore that, but for me Carmen is above all emblematic of free spiritedness and sexual liberation: the story of a resolutely independent woman. It’s an entirely musical show, built on orchestral grandeur and an original score, and superimposed hip-hop loops. The juxtapositions are enthralling.”

La Tête de Pioche is an immersive open-air theatre company, with recognized expertise in puppetry and object theatre, and it is also a creator of novel forms that break with the traditional stage-audience relationship. On top of all that, its main director has a profound love of music. In the past, the company has staged a musical object-theatre play about the career of Québécoise diva Edith Tremblay (Êtes-vous nés un jour de pluie ?, 2004) and a play suffused with the music of Boris Vian (Nous irons danser sur vos tombes, 2010). Tremblay also brings his musicality and directorial talent to his side-projects, including collaborations with Misteur Valaire and Emile Bilodeau.

“I like to say I make live music videos. In my mind, as I create them, the shows really do resemble music videos, even though there’s never any video in the final product. I almost always work with a continuous soundtrack, layering intriguing worlds and movement on it. The narrative structures of the music video are deeply ingrained in me.”

Rap and Carmen: a perfect match

“Rap and opera have more in common than you might think,” the artist says. “Both can seem closed off to some audience members, both follow specific formulas and conventions that can be overwhelming for neophytes, and yet both are also universal and popular to the point that everybody knows the tunes without realizing it. Everybody has a certain amount of knowledge about them.”

That makes them interesting formats to mash up, juxtapose and deconstruct, creating shockwaves. Tremblay stresses the point: the contemporaneity of hip-hop is a great match for classical forms and opera’s orchestral majesty. “I chose Sans Pression, a veteran of the Golden Age of Quebec hip-hop in the 90s, because to my mind he is still a quintessential hip-hop artist. It’s an art form whose conventions he embraces with grace. He has a remarkable hip-hop presence. It’s there in his stance, his charisma, his gestures. Obviously, I also chose him for his work: he wrote all of the show’s raps, set to music inspired by the opera’s original score, which Loïc reworked brilliantly.”

In this iconoclastic environment, Carmen is played by two singers – a doubling that highlights her magnetic personality. Alongside them, Sans Pression becomes a kind of choryphaeus – a Greek chorus leader who harangues and guides the audience.

“In this show, we also had a lot of fun playing with wardrobe traditions: on the one hand there’s urban hip-hop style, on the other dazzling operatic costumes,” the director notes. To top it all off, the theatre company is working with the Fashion & Design Festival for the first time – another unique combo!

No reservations, but seating is limited.
Vaccine passport and ID required, in compliance with Quebec government requirements.