A new twist on the legend of the "Chasse-galerie" 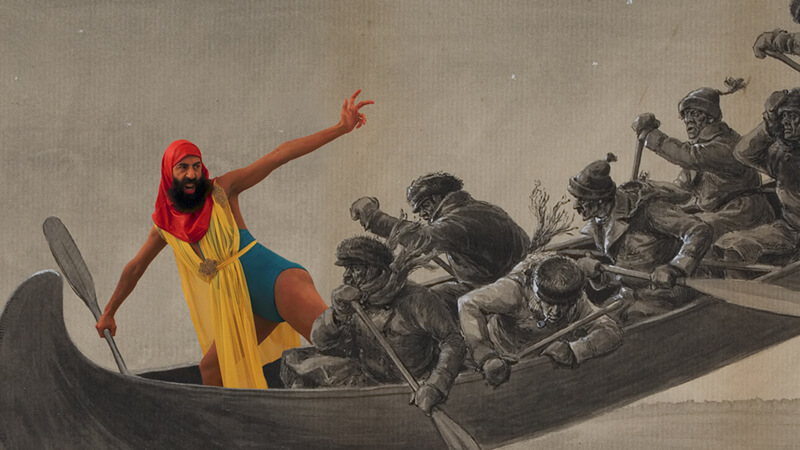 Eight immigrants make a deal with the devil and get in a Quebec-bound flying canoe. Sound familiar? You’ve probably heard a very similar tale before! As part of the TransAmériques festival (FTA), artist 2Fik revisits the legend of the Chasse-galerie in the form of a unique photo-montage to be created live in the Place des Festivals, which will be transformed into an open air photo studio from May 28 to 30.

In 2Fik court la Chasse-galerie, the multidisciplinary artist plays his own characters, who will board the canoe one after the other. He revisits questions of identity, which have always driven his work. Ready for a little magic-canoe ride?

We met 2Fik to learn a bit more about the project. We also caught up with Martin Faucher, the festival’s co-executive director and artistic director, for a look back at the ten public artworks created during the last ten editions of the TransAmériques festival.

How would you describe your artistic approach?

I make visual art in which I appear. I create photos in a performative mode – I am the photographer, but also the model, director, stylist… I’ve created 13 characters that I play and that reappear in all my works. Each one has an age, a name, a backstory, and they all met in Quebec. The backdrop of my work is identity, gender and perception.

What sparks your interest in these themes?

We tend to pigeonhole people because they talk like this or look like that. To me, identity is a very complex phenomenon, and everyone has the right to ask questions about who they are, the direction they’re going, the values that matter to them. The characters I’ve created allow me to explore these issues in many different ways.

What is the origin of the project you will present over three days in the Place des Festivals?

In 2013, I made a photo series called 2Fik au musée, in which I reinterpreted classic paintings. My 13 characters found themselves taking the position and pose of the people portrayed in those works. Then, I was invited to Croatia and Ireland to reinterpret those countries’ famous paintings. After returning to Quebec, I wanted to find a quintessentially Québécois work and reinterpret it.

I wanted to pay tribute to Quebec, and I came upon the Chasse-galerie, a story by Honoré Beaugrand, based on an old Quebec legend in which eight coureurs des bois make a deal with the devil to allow them to go celebrate the New Year with their loved ones. And I saw the painting by Henri Julien illustrating the story. I was born in France and have lived in Morocco, so a flying canoe full of lumberjacks is something very exotic for me!

How do you use Henri Julien’s painting?

When I read the story, I was struck by the connections between religion and the desire for a better life. I told myself this would make a great parable on immigration. Instead of eight lumberjacks, we have eight immigrants who make a deal with the devil to get to Quebec. The canoe will land in the Place des Festivals with my eight characters who were born outside Quebec. Four of my other characters will welcome them. My 13th character, the veiled bearded woman, will represent the devil.

So for three days, the public will see your entire artistic process on display?

Yes. The first day, I will assemble the set and do some tests. The second day, I will take all the photos. I’ll go from a 13-month beard to a clean-shaven face! And on the last day, I’ll put it all together.

Why did you choose to do it all in public view?

I’m fascinated by the idea of the deconstruction and desanctification of art. I like the idea of completing this project, from A to Z, for an audience. At certain moments, people will find it intriguing, at other times they may not see much going on, but that too is art – those moments spent waiting. I also come from a non-artistic family. For a long time I thought art was for the elite, so I’m sensitive to issues around the accessibility of art, in any form.

Barriers and participation also come into play there…

Exactly. For example, some people wonder: am I allowed to go to the museum? Well of course, but there is still a perception that leads us to ask if we have the right, if we have the necessary knowledge and perspective. In the Place des Festivals, there will be people who are very attuned to contemporary art who will grasp the smallest details, and there will be people who will ask “What on Earth is that thing?”

I want to overcome that. I want people to feel at ease asking me questions. I want the work to be completely integrated into the public space. On the first day, May 28, I will have more time to talk about what I’m doing. There will also be mediators on-site, as well as biographies of my characters posted on panels. There’s no excuse for not coming!

Martin Faucher, co-executive director and artistic director of Festival TransAmériques (FTA) looks back on 10 years of public art during the festival.