Sound and light to fight the winter blahs 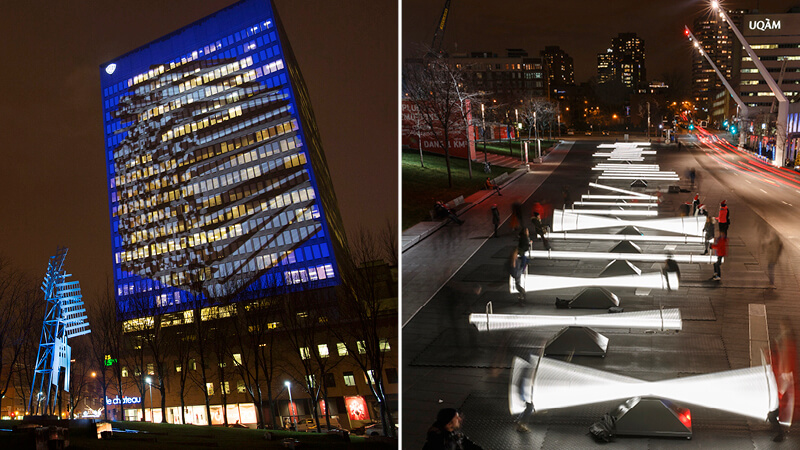 For the sixth year, Luminothérapie is set to revitalize Montrealers who are feeling a little bit of the winter blues. This year, the Impulsion installation will also get them moving and all warmed up! Thirty seesaws are being installed in the Place des Festivals, where visitors will create waves of light and sound just by playing on them. Plus, nine mesmerizing video projections will create fascinating illusions of depth on building façades in the Quartier des Spectacles. Not only is Impulsion a great way to fight the cold, grey winter, it’s a guaranteed source of pleasure and amazement. 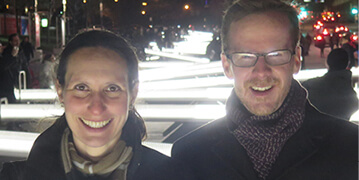 Designers Lola Sheppard, an architect at the Toronto firm of Lateral Office, and Conor Sampson, also an architect and lighting consultant at CS Design in Montréal, spoke to us about Impulsion, from inspiration to inauguration.

How did you come up with the idea of installing 30 seesaws in the Place des Festivals?

Conor Sampson: We were intrigued by the idea of public interaction. When it’s cold, people are less inclined to spend time outside. The idea of getting people moving by inviting them to use seesaws soon emerged as an interesting one. As lighting designers, we’re very proud to have made a work that fits within the Quartier des Spectacles’ illumination plan, and to explore the many ways of playing with light as a material.

How did light and winter inspire you to create Impulsion?

L.S.: We were driven by one question: how could we attract people to an urban space in winter? And that of course is one of the motivations behind Luminothérapie. The seesaws encourage people to experience a different way of moving in the cold and at night. We deliberately chose white, monochromatic light. In a – we hope! – white setting, the installation will transform the Place des Festivals in a subtle but dynamic way.

C.S.: Darkness and the winter night are also inspiring elements. We wanted to illuminate the dark days and nights for all Montrealers, including families with kids, so that they could enjoy an entertaining, dynamic interactive nighttime experience – starting at 4 p.m.! So light is a very important part of the work.

Impulsion is much more than an enormous playground…

L.S.: Beyond the playful aspect, each seesaw is also an urban sound device. The landscape is transformed by the sound and light emitted by the seesaws when people play on them. The result will always be different, whether there are 30 people on the site or three people on a single seesaw.

C.S.: The closer you get to the work and the more you play on the seesaws, the more you notice subtleties in the installation and details in the sound and light. Depending on the angle of view or the motion of the seesaws, people will see the light in different ways.

L.S.: Yes. We worked with two Montreal-based artists, Mathieu LeSourd (Maotik) and Daniel Iregui (Iregular), who make video for interactive environments. Their works feature repetitions of geometric elements, inspired by serialism, which transform themselves over time, with the music. Mitchell Akiyama composed all the music for Impulsion, linking the installation and the video works. It gives even more life to the project.

C.S.: Sound is at the heart of Impulsion. With the seesaws and video projections, we were trying to “visualize sound.” When it comes to the seesaws, motion generates sound, and with the video projections the visuals respond to sound. It’s an incredible opportunity to be able to reach people this way!