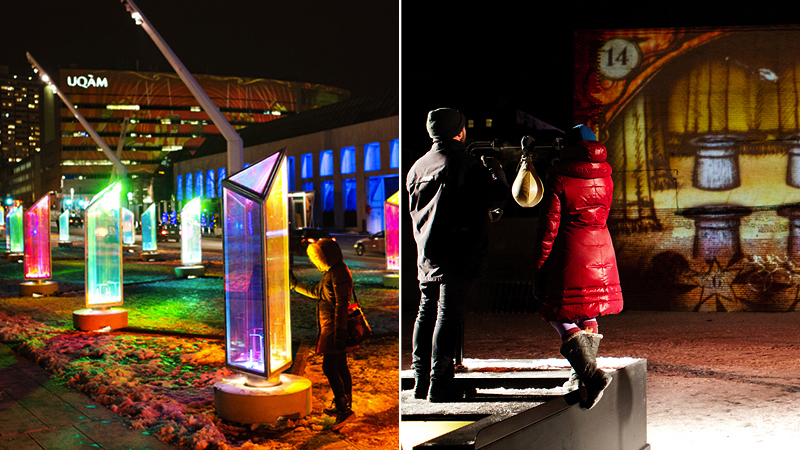 A giant kaleidoscope on the Place des Festivals and an old-time carnival on eight building façades in the Quartier des Spectacles: the fifth annual Luminothérapie event, which invites you to interact with a pair of creative installations, is sure to be the most colourful yet!

Here are five good reasons to check out Prismatica, and five more to take in the Fascinoscope video projections.

1. To be at the centre of a giant kaleidoscope
“By definition, light is the starting point for Luminothérapie,” says Pierre-Alexandre Le Lay of RAW Design, the Toronto-based firm behind Prismatica. “We wanted people to be able to play with light and colours. The idea was to create a kaleidoscope that would fill the entire space available for the installation. That’s why there are 50 interactive prisms that anyone, even small children, can pivot.”

2. To combine science and play
“Each panel of every prism is laminated with a dichronic film,” Mr. Le Lay explains. “That means each surface reflects different colours depending on the angle of the light source and the viewing angle. During the day, the prisms reflect natural light. After dark, they’re illuminated from within, creating a more pronounced directional effect.”

3. To learn more about the work of RAW Design
“Most of our work is architectural. We found it very stimulating to work on a design that’s more in the realm of public art. It’s an area we want to keep exploring. And this isn’t our first installation: last year, we participated in the Warming Huts event, in Winnipeg.”

4. To see the city in a new light
“We wanted the public to interact with the work,” Mr. Le Lay continues. “We wanted people to be able to walk among the prisms and manipulate each one. The goal is to present a new way of seeing the city and the Place des Festivals.”

5. To abandon yourself to music and colours
“As well as a mesmerizing display of lights and colours, Prismatica has an audio component. The movement of the prisms is accompanied by bell music of varying intensity. The lighting design is by ATOMIC3 and Dix au carré did the sound design.”

1. To immerse yourself in an old-time carnival atmosphere
“We have created a big open-air carnival, and each of the eight video projection sites presents an environment on that theme, like different carnival booths,” says Matthieu Larivée of Lüz Studio, creators of the project. “There’s everything from a hypnotizer to a magician and acrobats. We chose the carnival theme because it’s something everyone can relate to, so it quickly grabs people’s attention.”

2. To play interactive games controlled with punching balls
“Outside Saint-Laurent metro station, we’ve set up four interactive games using pear balls,” says Mr. Larivée. “It’s like a schoolyard, except the balls are wired! Up to four players can test their accuracy, speed and strength. Even children can play. I like the fact that everything is controlled with a very simple object that every Quebecer knows. Even tourists who aren’t so familiar with the punching ball will find it very intuitive and simple. There’s no need for a manual.”

3. To appreciate a handmade world
“Because our theme has a nostalgic element, we decided to create each world by hand. Only the magician’s environment, on the UQAM bell tower, which includes some video, is not entirely hand-drawn. We played with sepia tones, a little like Instagram filters.”

4. To discover the work of Lüz Studio
“This is our first standalone public work,” Mr. Larivée says. “Usually we create ambiances and environments to showcase performers, like Rock et Belles oreilles or Cirque du Soleil. This time, our work is the show. It’s a great opportunity for us.”

5. To enjoy simple pleasures
“We always try to put ourselves in the audience’s shoes. To attract them to façades that they usually just pass by, we created a living, highly accessible world. We didn’t want people to ask themselves what we were trying to achieve. There’s a narrative, but you understand it very quickly.”