In 1980, Montreal banned unauthorized advertising posters. In 2012, almost 750 posters will be on display at 15 different sites all year long. The exhibit and the accompanying book celebrate 25 (and a half!) years of the Publicité Sauvage firm as well as the medium itself, a silent witness to the development of urban life.

From Foufounes électriques to the UQAM École de design via Place des Arts and the Monument-National, the advertising posters follow a path that runs all over the city -- similar to the path taken by Publicité Sauvage founder Baudoin Wart.

"Starting out, it was a small company doing something illegal. They had to dodge the police, even if all the major cultural organizations used their services" explained Marc H. Choko, who curated the exhibits. 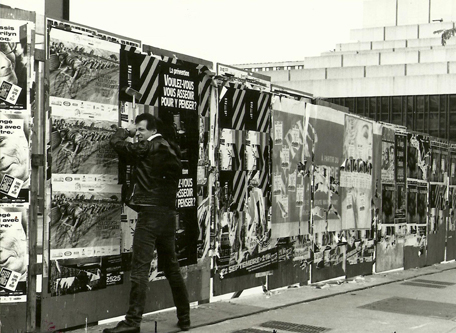 As a poster fanatic and professor at the UQAM École de design, Choko didn't have to think twice before taking on the job of curating this monster exhibition. "At the beginning, the idea was to do one per month. We checked out several locations, and they almost all said yes, so we ended up with quite a nice problem: having to mount 15 exhibits."

In addition to sketching a quarter-century of Montreal advertising history with picks from a collection of over 40,000 posters, the exhibit will offer 16 original posters for posterity. Eleven established poster artists and six up-and-coming young talents got commissions to the illustrate the fifteen exhibits and the main exhibition poster. 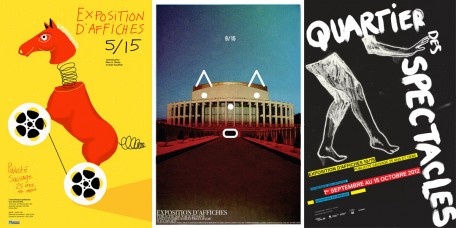 In choosing which works to present, Choko and his team let themselves be influenced by the sites of the exhibit. Thus posters connected to cinema are showing at the Cinémathèque québécoise, circus posters at Tohu, and social activist posters at the Écomusée du Fier Monde. Other sites lent themselves to more diverse displays, like those at Complexe Desjardins or the UQAM École de design.

"We chose good posters, but it's not all good posters. There are also some bad posters included in the exhibit, which are there because they played a significant role in Montreal history, or mark some historic people or places."

Now that street art and interactive urban installations are at their peak, posters are undergoing a transformation and becoming an institution. Long confined to construction fences, they now illustrate the shifting magnetic poles of the city's art scene. Théophile Gautier or Andy Warhol? The choice up to you.

Most exhibits are free. You can check out the exhibition program here.