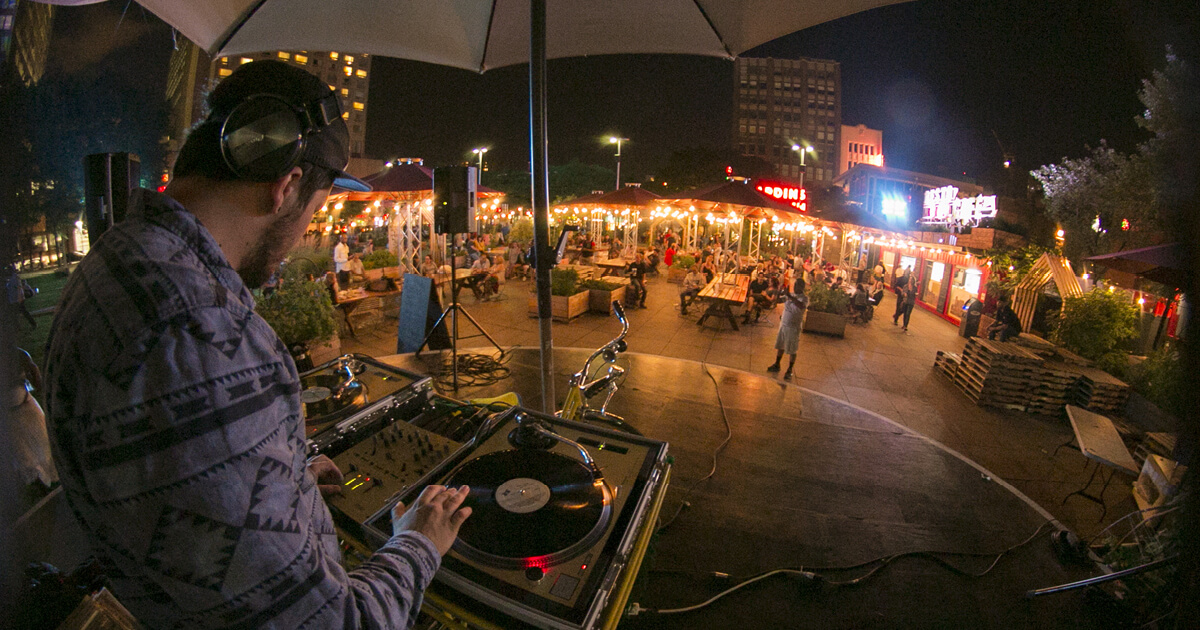 Montreal, June 5, 2018 – Music will be front and centre this season in Les Jardins Gamelin. Come hear more than a hundred Montreal artists from a huge variety of musical and cultural traditions. They’ll broaden your horizons, amaze you with their talent and make you want to get up and dance!

Jazz, hip-hop, French chanson, flamenco, folk, gospel, reggae, funk, house and electronica: a diverse musical palette is the signature feature of this fourth season, with artists from more than 25 different backgrounds keeping the summer hot in the Jardins!

Here’s a look at some of the Jardins’ musical highlights this June and July.

AN ELECTRIFYING WEEK OF MUSIC

The DJs of the Tupi Collective are back to bring Brazilian beats to the Jardins’ spacious patio. Marcus Freitas (DJ Mks) and Wallace Roza (DJ Skambo) take us south, with everything from samba to hip-hop in a thrilling blend of new and classic Brazilian sounds. Tupi Wednesdays, until July 25 from noon to 2 p.m. and 4:30 to 6:30 p.m., except June 27 and July 4.

Take a musical journey with the escales musicales, where you’ll hear the latest world music by our local artists. Noon and night, come out and hear Jazzamboka (June 7), FunkyFalz (June 7-14), The Beatdown (June 14), African Guitar Spirit (July 12), Ojos Claros Flamenco (July 19), and Shnock & Shanti (July 26). On Thursday, July 19, celebrate the sounds of Morocco with DJ Murad and the traditional band Salamate Gnawa, who will take you to faraway North Africa through music and dance. Les escales musicales, Thursdays from noon to 2 p.m. and 5 to 11 p.m.

The Friday program includes noontime jazz in June and lunchtime chanson in July, as well as happy hours with Ce soir on danse! until closing. Jazz trumpeter Jacques Kuba Séguin and his quartet will interpret jazz standards and the sounds of New Orleans (June 8 and 15). In July, singer-songwriters take the spotlight, with artists like Jérôme 50 (July 6), Caroline Savoie (July 20), and actress Angélique Duruisseau performing the songs of Ferré, Piaf, Cohen and Plume (July 27). Noontime jazz, June 8 and 15 from noon to 2 p.m. Noontime chanson, July 6, 13, 20 and 27 from noon to 2 p.m.

Something new to savour: brunch with a great retro soundtrack!Get together with friends for brunch backed by some of the best tunes of the 50s through 80s. DJs Mathieu Beauséjour, Parka Pat and Napoléon 67 will spin records for these delicious morning sessions that always end in a turntable battle. Brunch rétro, Saturdays from 11 a.m. to 3 p.m.

SPINNING VINYL IN THE JARDINS

THE JARDINS’ VERY OWN RADIO

For the third season in a row, Radio-Canada’s music station, ICI Musique, is teaming up with Les Jardins Gamelin to provide all-day music, mainly in French, throughout the season. From Stromae to Fanny Bloom, Alex Nevsky, Galaxie and Indochine, the station’s festive selections are guaranteed to get you up and dancing! You can also listen to the Jardins’ web radio through the ICI Musique portal.

The Nuits d’Afrique festival presents Carine au Micro as part of the escales musicales series, June 14 from noon to 2 p.m. This highly regarded artist from Benin delivers her gospel, jazz and hip-hop tunes with disarming authenticity.

The Haïti en Folie festival invites you to immerse yourself in Haitian culture with DJ Set on July 25 from 5 to 7 p.m. and July 26 from 5 to 11 p.m. Charismatic guitarist of Haitian origin, Toto Laraque will also be live July 26t, from 7 p.m. to 9 p.m. Come listen to fantastic Haitian music and dance to some of the Caribbean’s most irresistible beats. 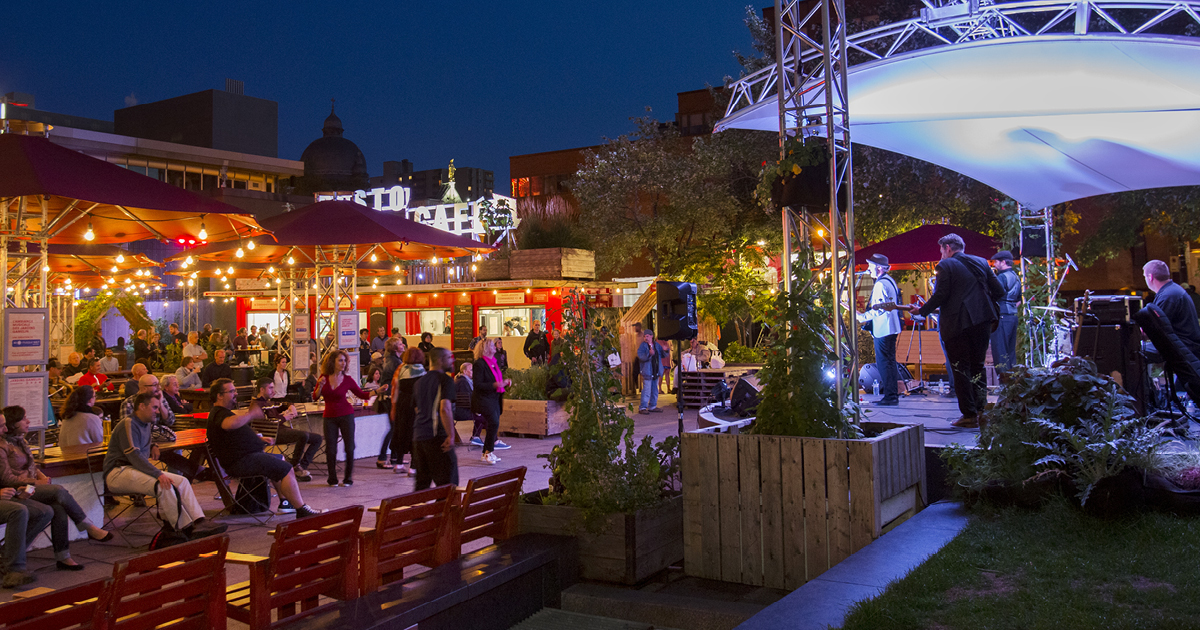 Dominic St-Laurent and his team serve up a snack-bar style menu found exclusively in Les Jardins Gamelin, including happy hour (5 to 7 p.m.) specials and kids’ menus.

ABOUT LES JARDINS GAMELIN
In the spring of 2015, Place Émilie-Gamelin showed a new face to Quartier des Spectacles residents and visitors with Les Jardins Gamelin, open from May to October. A large, green and inviting civic space in the heart of downtown, Les Jardins Gamelin return every year with an original temporary layout and a versatile set of facilities. The space’s unique, accessible and human-scale programming, now in its fourth season, has become a part of daily life for residents and visitors, making Les Jardins Gamelin an inclusive gathering place in true Montreal style. The initiative, led by the Quartier des Spectacles Partnership, is produced in collaboration with Pépinière & co, Sentier Urbain and numerous partners, with the financial support of the borough of Ville-Marie.

ABOUT THE QUARTIER DES SPECTACLES PARTNERSHIP
The Quartier des Spectacles Partnership, founded in 2003, is a non-profit organization with more than 70 members active in the district. It is responsible for animating the Quartier des Spectacles by programming cultural activities, managing and animating public spaces, providing distinctive illumination, and promoting the Quartier as a must-visit cultural destination. The Partnership is supported by the Ville de Montréal.