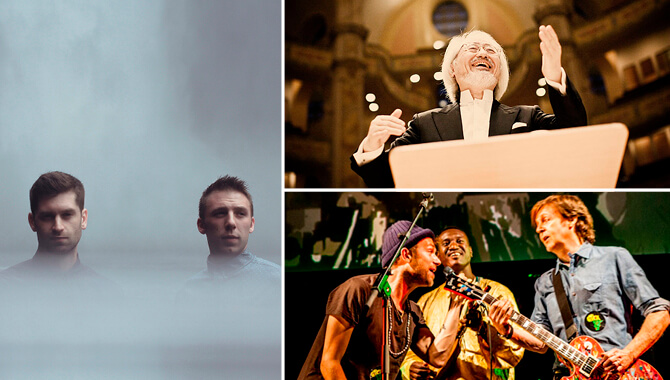 This November, the Quartier des Spectacles will groove to the sounds of three events for music lovers of every stripe. Whether you’re into world music, classical or our local pop scene, you’re sure to find something you’ll love among the many concerts and artists available.

Here are a few highlights to help you plan your musical menu for November.

This cosmopolitan celebration showcases our society’s diversity, past and present, with concerts, parties and plenty of dancing! It’s an exceptional springboard for artists, while audiences enjoy a varied program including some of the most exciting up-and-comers in world music.

Don’t miss the free afternoon showcase on November 17 at the Monument-National. The concert features Bonsa, Zimbamoto and Jazzamboka. At 6:30 p.m., the concert will be followed by the North American premiere of the documentary The Africa Express, with legendary musicians such as Baaba Maal, Amadou Bagayoko, Paul McCartney and John Paul Jones. The film’s director, Stephen Budd, will be there for a Q&A session with the audience.

The 12th annual edition of this festival presents more than 100 local and visiting artists. One look at its eclectic program and it soon becomes clear that for four days the festival – aimed at both the public and industry insiders – offers an incredible wealth of concerts to choose from.

Some highlights: rapper Koriass with Lary Kidd and Pierre Kwenders at Club Soda on November 16. That same evening, the Bon-Pasteur Historic Chapel is the venue for an all-female lineup of up-and-coming singer-songwriters, Beyries, Eden Sela and Sophia Bel. Fans of electronic music won’t want to miss the American duo Odescza, who will play selections from their new album, A Moment Apart, at the M Telus on November 17.

Did you know that this annual celebration of the famous Baroque composer is the largest of its kind in North America? With a series of concerts and educational activities involving exceptional musicians from Quebec and around the world, the festival salutes the genius of the great German composer, whose works are still enchanting listeners more than 250 years after his death.

The festival’s many concerts include a visit from the Prague Collegium 1704 baroque orchestra performing the Mass in B Minor on November 17 at the Maison Symphonique. Swedish clarinettist Martin Fröst and Canadian flutist Timothy Hutchins will play a tribute to Mozart and Bach on November 21, 22 and 23, conducted by Masaaki Suzuki, while pianist Serhiy Salov will play pieces by Scarlatti, Bach and Prokofiev at the Bon-Pasteur Chapel on November 29.