The Montreal/New Musics Festival: back to the future of music 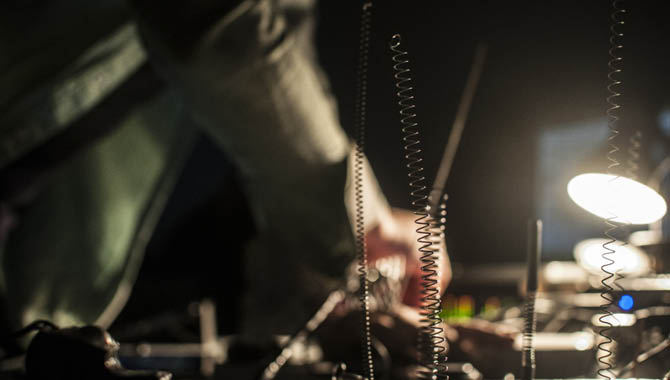 What’s going on in the world of contemporary music and musical creation? You’ll get a good idea at the Montreal/New Musics Festival, organized by the Société de musique contemporaine du Québec (SMCQ), celebrating its 50th anniversary this year.

The successors to Stravinsky, Debussy and Brahms have all kinds of new tools at their disposal, and their ambition is to create pieces that fully reflect their time. To celebrate creativity in music, this year’s festival draws inspiration from the past – the better to see into the future.

We spoke with Walter Boudreau, the SMCQ’s artistic director, who is also a composer, conductor and director of the Montreal/New Musics festival.

What is new music?

It’s music of our time, being composed today. It is a direct descendant of classical music. Today, contemporary music is being composed in countless forms, and is not restricted to ensembles that play classical instruments. For example, some orchestras now include electronic sounds and components. That gives the music incredible momentum, and it has evolved faster in the last 25 years than it did in the previous three centuries.

What will audiences find at the festival?

The theme for the 50th anniversary of the SMCQ – back to the future – will resonate throughout the festival. To celebrate so many years of musical creation, we are looking backward and forward at the same time. So it will be a very expansive panorama. We will present small and large ensembles, as well as soloists such as the Mexican cellist Iracema de Andrade, who incorporates video and electronic music into her work. Meanwhile, the Orchestre symphonique de Montréal will perform a work by Serge Garant, the SMCQ’s first director. There’s also a 100th anniversary performance of Stravinsky’s The Soldier’s Tale. The program is varied and will certainly give people an idea of what’s happening in musical creation in Quebec and around the world.

Young musicians such as Nicole Lizée and Zosha DiCastri are also featured prominently.

We always try to strike a balance, though not in a strictly calculated way. Our foremost criterion is quality. And so much the better if some of our performers are young, because it’s important to think of the future, and to give young people the chance to express themselves. And it’s also important to play, re-play and revisit certain works, as the pianist Christina Petrowska Quilico will do by performing the Portraits Romantiques by the late Michel-Georges Brégent.

Alongside the festival, you are holding the Salon des nouvelles musiques, in the exhibition space at Place des Arts, from February 10 to March 4.

Visitors will find all sorts of tie-ins to the festival: audio creations, videos and acoustic installations. It’s a bit like a visitor information booth showcasing what the festival has to offer! It’s a fun way to familiarize yourself with our activities. The Salon also includes an exhibition, Écouter un mouvement du voir, curated by Mario Côté.

FONOFORMIES
Chapelle historique du Bon-Pasteur, February 25 and 26
This show invites children into a world where music sets lines, shapes, materials and textures in motion, delighting all the senses.

A MASTERPIECE FROM THE PAST