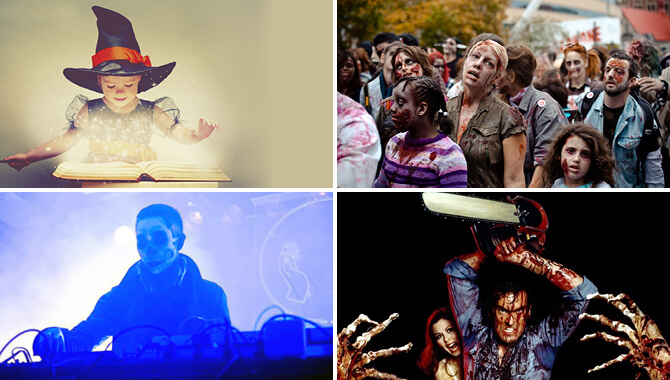 Whether you jump out of your skin at the slightest fright or spend hours making your costume, the Quartier des Spectacles has much more than candy for you this Halloween. Costume parties, kids’ shows, a zombie walk and horror movies: our scary-season activities will give you goose bumps!

Here are seven frightfully fun events for every taste.

Each year for the last five years, they have returned: hundreds of zombies, invading the city. But don’t panic, this event is all in good fun, attracting folks with a passion for makeup and costumes. Every year they take it to another level. Come shuffle with them!

Dr. Caligari’s Heirs: a History of the German Horror Film

Nosferatu and The Cabinet of Dr. Caligari gave birth to the horror film in Germany. This presentation, including several film clips, will discuss those landmark works along with more recent ones. Chills guaranteed. ( In French. )

For the 15th year in a row, the SPASM festival – focusing on the weird end of the cinematic spectrum – presents an evening of local and international short horror movies. Why not turn it into a creepy double feature? Extend the fun by adding a ticket for a special midnight screening of the classic Evil Dead, with several of the movie’s stars in attendance.

For creatures of the night

Put some extra effort into your costume: it could pay off big, since there’s a $500 prize for best costume. If your Dracula or Smurfette doesn’t win over the judges, you can always console yourself with candy!

Eleven DJs, including Kora, A-Rock and Groj, will take over the Satosphère and the dance floor. This year’s theme: the living dead. Naturally, there will be unique and rather unusual visuals to put you in full-on zombie mode. Hurry, there aren’t many tickets left!

Story time at the Grande Bibliothèque takes a fun Halloween turn, celebrating friendly ghosts, black cats and bats. Infants and toddlers (to 36 months) are invited on October 27 to a birthday party for Bouquinette the witch, while kids ages 3 to 5 are invited to hear some tales of magic and fantasy on October 29. Space is limited; reservations recommended. ( In French. )

This is the story of a witch who’s too nice to frighten anyone. What will Oups-Patatras do to win the scare contest and the respect of her sister witches? This percussion-driven musical show is aimed at children ages 3 and up. Parents and kids alike are welcome to come in costume! ( In French. )