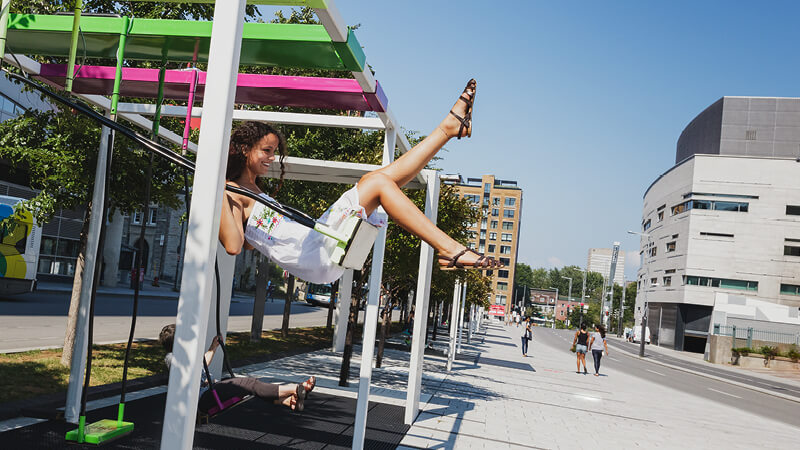 They’ve become a true Montreal icon. Just as we eagerly await the return of hot summer days or hockey in the fall, 21 Balançoires (21 Swings) trigger our thirst for spring and the chance to be part of the installation’s beautiful music.

It’s more than just a playground toy and more than a musical instrument: this collaborative work has become, since its first presentation in 2011, nothing less than a catalyst for change in the Quartier des Spectacles.

Here are nine little-known facts about the musical installation 21 Balançoires returning for the sixth straight year until May 29, with an encore scheduled for August 8 through September 5. 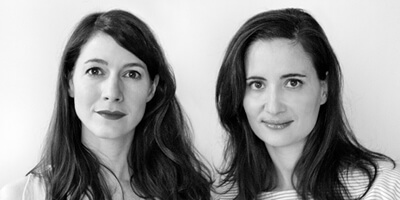 Each swing produces sounds on its own, but the work is designed to encourage people to collaborate. As people focus on coordinating their motions and listening to the music, the soundtrack grows more interesting and complex. “The idea of collaboration set the tone for the piece, and for the research we’ve done since the first presentation,” explains Mouna Andraos, co-creator, with Melissa Mongiat, of 21 Balançoires.

To optimize the collaborative experience, the Daily tous les jours team worked with Luc-Alain Giraldeau, a university professor who’s an expert in behaviour – animal behaviour. After all, people are animals too!

The swings reproduce the sounds of four instruments: piano, guitar, vibraphone and harp. Each one corresponds to a swing of a different colour, while the height reached by the user determines the note played.

4. A concept that travels well

The concept created by the designers at Daily tous les jours isn’t just entertaining Montrealers. The creators made a travelling version of the installation named The Swings: An exercice in Musical Cooperation. After its initial display in Colorado in 2014, the Knight Foundation awarded a grand making it possible to go on tour. The work has already been enjoyed in Florida, is now making beautiful music in Detroit, and will visit San Jose, California later this year. “We designed the installation specifically for Montreal and the Promenade des Artistes in the Quartier des Spectacles, but we quickly realized that the concept is universal,” says Mouna Andraos.

The 21 Balançoires break down barriers. The installation helps people meet and collaborate. Thanks to the Knight Foundation grant, Daily tous les jours is currently studying the social and economic impact of the installation. “21 Balançoires represent the future of our cities,” Mouna Andraos argues. “The installation shows how we can live together, reclaim public space and create gathering places.” 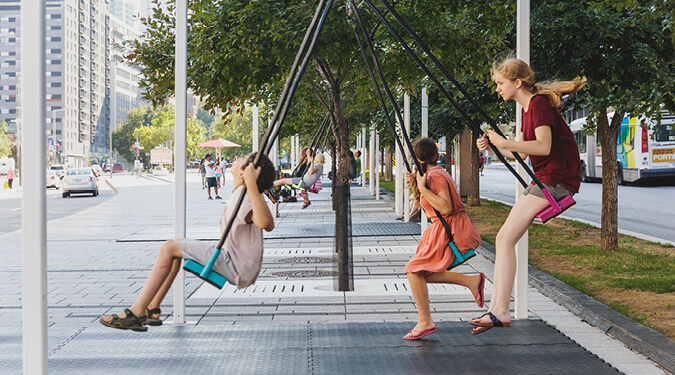 Every day, each swing moves some 8,500 times. Imagine how many people have played with 21 Balançoires since its unveiling six springs ago!

First presented in 2011, 21 Balançoires were intended to be a temporary piece. But in light of its incredible success, the installation has become a tradition and returns every spring. “At first, it was going to be five weeks and done,” says Mouna Andraos. “We never thought the installation would still be presented in 2016, and we’re very proud that it is!” 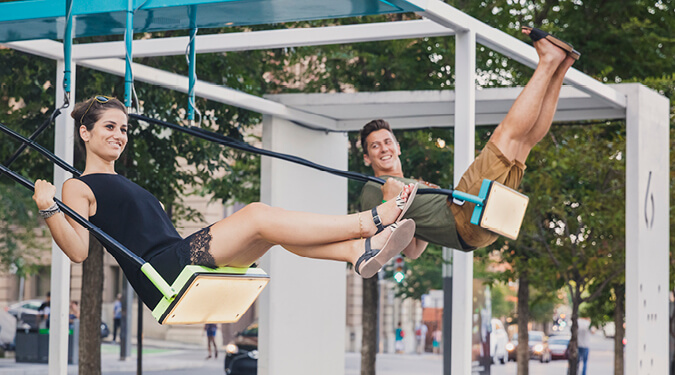 The 21 Balançoires are far from being just for kids. They’re actually for the child we all have within us. Each spring, the colourful seats hold a succession of blond, brown, grey, dyed and bald heads. Memories and nostalgia for childhood swings attract people of all ages to the installation.

While the swings will be put away to make room for the many festivals that take over the Quartier in June and July, they’ll return for an encore from August 8 to September 5. 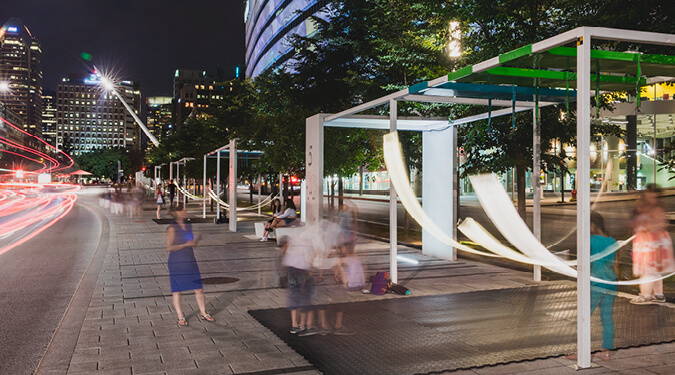