Making the most of Montréal en lumière 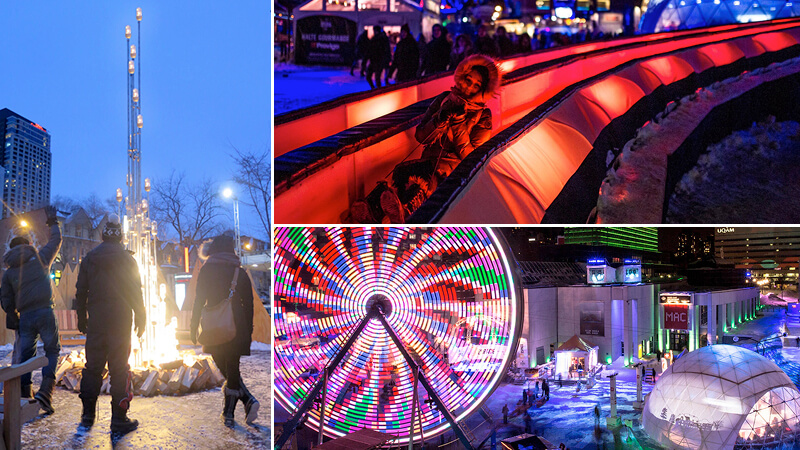 Over the last 17 years, the Montréal en lumière festival has established itself as an essential event to embrace our northern character to the fullest. And there are many, many ways to celebrate, from singing and dancing to eating and simply getting together. Here are some free activities, running all festival long, to help you make the most of Montréal en lumière in the Quartier des Spectacles, as well as a list of not-to-be-missed indoor shows.

But first, a glance on the interactive installation Îlot de chaleur (“Island of Warmth”), a musical and luminous experience presented as part of Montréal en lumière, and produced by the Quartier des Spectacles Partnership and Illuminart.

Gather around the Îlot de chaleur

Félix Dagenais, co-founder of ATOMIC3 and designer of Îlot de chaleur, talks about the project.

What kind of experience do you want people to have with this interactive installation?

The idea is to create a downtown space where people can gather around a high-tech bonfire. The “fire” is made of 220 incandescent bulbs that generate heat. Around it there are rocking chairs for sitting and enjoying the fire. A bonfire is a primal ritual for all Quebecers. Even though ours is modern and interactive, people will naturally gravitate to it.

How does it work?

There are motion sensors under the floor, on the chairs and around the fire. People stoke the flames by rocking in the chairs, and by jumping around the fire, they create sparks that shoot up to the top of the fire – six metres at the highest point. The more people gather around, the higher the flames dance and the more the fire crackles. All that’s required is for plenty of people to come rock, dance and sing!

Year after year, Montréal en lumière presents an impressive gourmet section. This edition’s honoured city is Shenzhen, China. While many food-related activities will be held in restaurants, there’s also plenty of great eating to be done on the outdoor site. The Festival Of Our Cheeses (free, February 18 to 20) and the Mondial des cidres (February 25 and 26) at Complexe Desjardins, the “5 à huîtres” oyster event (February 19 and 26, March 4) in the Place des Festivals and extended Thursdays at the LAB in Espace Casino (February 18 and 25) are just a few of the delicious activities.

Play at the outdoor site

The outdoor site has been revamped this year, and it’s going to be more magical than ever, including beloved returning classics alongside new attractions. Throughout the festival, you can get a panoramic view of the festival site from the China Ferris Wheel or the long zipline. The ice slides are also back. Free concerts (Boogie Wonder Band, Shenzhen Pop Music Show, etc.) will also be held in the Place des Festivals, which will also have a number of refreshment stands. And, for a Chinese flavor, do not miss to stop at the Dumpling Bar (February 18 to March 5, free)

February 23
On her latest record, Bonifassi gives a modern interpretation of old slave worksongs. This is sure to be a powerful show. Plus, ticket holders will receive a complimentary copy of the singer’s album.

February 24
After 11 years working in English, the rocker (known for his appearance on La Voix) is back to French for his first solo album, Debout dans l’ombre.

February 26
Foxtrott is the face of the underground electro-pop scene, an artist who will get everyone up and dancing with an irresistible blend of cumbia, hip-hop, gospel and reggae.

Dance and theatre at Centre Pierre-Péladeau

February 19 and 20
The author of the famous eponymous book, Éric-Emmanuel Schmitt, will take the stage to play his character, Momo, as an adult.

February 27 and 28
Over the last 20 years, this Spanish troupe has performed around the world. This Montreal stop is a red-hot exploration of the art of Flamenco.

Classical music at the Maison symphonique

February 21
With the Chinese city of Shenzhen being honoured this year, the Maison symphonique welcomes its orchestra, led by world-renowned conductor Jindong Cai.

Special event at the Gesù

February 19
As part of the Gesù’s 150th anniversary celebrations, the festival presents Ivy, who will combine rap, acoustic music and opera in the venue’s Baroque church.