A short guide to the Journées de la culture 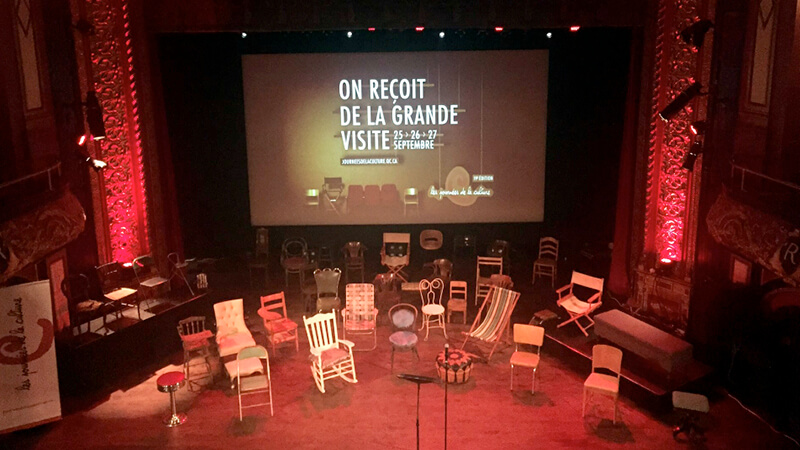 3,000: that’s how many free activities will be open to everyone across Quebec for the 19th annual Journées de la culture, presented in 400 different municipalities. The Quartier des Spectacles has its fair share of them to help keep you entertained for the weekend of September 25-27. This year, many of the activities will have a cinematic theme, but every artistic discipline will be involved.

Whether you’re into dance, theatre or the visual arts, here’s a short guide to everything that’s going on in the Quartier des Spectacles.

On the wall outside Saint-Laurent metro station, four short films specially created for the site will be shown. The filmmakers were chosen through an open competition and created their works on the theme of neighbourhood movie theatres. The films were produced by the Quartier des Spectacles Partnership and Culture pour tous.

The idea is simple and fun. After randomly choosing an iconic line from a play, you’ll perform it for the camera, just like on a movie set. Do you have a hidden talent?

The Possiblement Théâtre company has created a colourful take on Don Quixote, designed to draw kids aged 7 to 12 into the classic story’s world of imagination. The performance will be followed by a discussion with the audience.
Reservations required

Théâtre Jean-Duceppe will pull back the curtain and invite you backstage for a unique opportunity to learn all about what happens behind the scenes. After the tour, there will be a discussion of what the theatre and the movies have in common.

Led by Chantal Dauphinais, audience members will learn short dance pieces and put their best foot forward to songs from Grease, Mary Poppins or West Side Story. Everybody dance!

If you aren’t yet familiar with this museum, which includes a violin making and restoration workshop, this is the perfect time to check it out. Located in the Quartier des Spectacles for 40 years, the space is always a delight whether you’re a music aficionado or simply curious.

From cinema to opera

The Opéra de Montréal presents two four-voice recitals in which the singers will perform famous movie songs, opera-style. Can you name that tune?

Add your voice to the Orchestre Métropolitain’s choir, led by François A. Ouimet, as it pays tribute to the movies. The more voices there are, the more the will soar.

In addition to free access to the exhibitions Nouveautés et autres obsessions and L’Œil et l’Esprit, presenting some of the highlights of the MAC’s permanent collection, the museum is offering creative workshops based on the work of Canadian painter Emily Carr.

VOX invites young people (ages 7 to 12) to discover the world of illustrator Clément de Gaulejac and “craft their own story.” Participants will learn about the artistic concept of détournement. Afterwards, check out his exhibition, Les naufragés.

The MU organization will give 90-minute tours of its murals at the Habitations Jeanne-Mance and in the Quartier Latin. You’ll learn all about the making of the works and their social context.

Behind the scenes at the Grande Bibliothèque

In the ten years since it opened, the Grande Bibliothèque has become a focal point of community life and a place that Montrealers love dearly. You probably enjoy browsing the collections, admiring its architecture and taking part in various activities, but how well do you really know your Grande Bibliothèque? With this tour, you’ll find out what makes it tick.
Reservations required

A guided tour of the Quartier des Spectacles isn’t just for tourists! In two and a half hours, you’ll learn all the secrets of the city’s liveliest square kilometre. From the Place des Festivals to Les Jardins Gamelin, from concert halls to cultural institutions, you’ll learn all about the Quartier’s history, architecture and events. The tours will be guided in French.
Reservations required