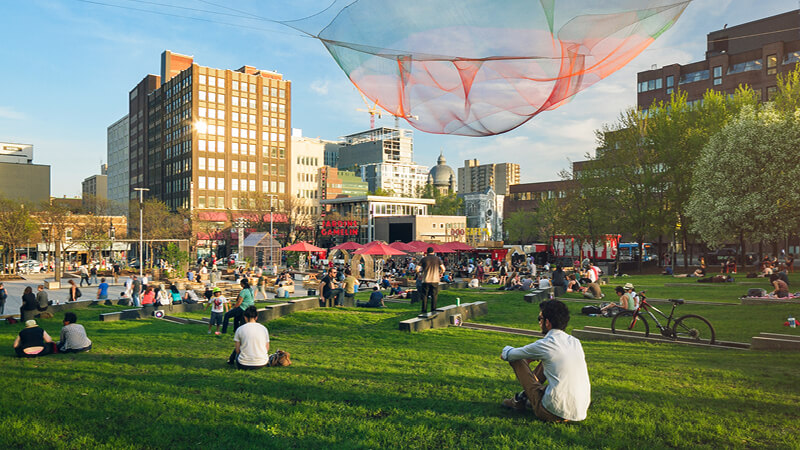 Since the beginning of summer, Les Jardins Gamelin have been a huge success with Montrealers and visitors. And it’s far from over! Until October 4, the space will continue to host a thousand and one activities – dance, literary events, karaoke, a farmer’s market, conferencew, yoga and live music will keep the space hopping into the first two weeks of fall.

To give you even more reasons to return, we asked four organizations active in Les Jardins Gamelin to tell us about their activities and role in this downtown oasis.

With the flower and vegetable gardens beautifying Place Émilie-Gamelin, the Sentier urbain organization wanted to bring agriculture back to the city and help Montrealers get closer to their food. The result is a self-service vegetable garden where visitors can enjoy the produce, as well as workshops where people can learn how to grow food in small urban spaces.

“You need to take the plunge and get your hands dirty – right downtown!” says Ms. Moreau.

“What’s great about Les Jardins Gamelin is that the initiative is not only about agriculture,” she continues. “It’s also a human-scale project that brings people together. Everybody is welcome to come and do some gardening. We’re using agriculture to break through social isolation. It’s also very empowering when you see the results of your work – flowers, plants and vegetables beautifying Les Jardins Gamelin.”

The participatory gardens are open daily. Sentier urbain gives tours of the gardens every Tuesday at 4 p.m. and every Thursday at noon, as well as introductory urban agriculture workshops every Sunday at noon and 12:45 p.m. No registration required.

With their tricycle converted into a turntable, the duo known as Tupi Collective play great Brazilian music and create a warm and welcoming atmosphere in Les Jardins Gamelin. “We want to introduce Montrealers to Brazilian sounds,” says Marcus Freitas, a.k.a. DJ Mks, half of Tupi Collective. He and his partner have collected some 1,200 vinyl records, most of them Brazilian.

“We find it very rewarding to play in Les Jardins Gamelin, because we get to meet a very diverse audience,” the musician says. “When they hear these songs, children start dancing, as do older people. In the crowd there are always friends, homeless people, people of every imaginable background and culture. It’s very inspiring to introduce so many people to Brazilian music, especially in such a great setting.”

On certain Fridays and Saturdays starting at 6 p.m., Tupi Collective invites the general public to dance.September 4, 11, 19 and 25; October 2

“To try it is to love it,” says Annie Joubert, director of Salsafolie. “Everyone who tries salsa dancing for the first time regrets never having tried it sooner!”

Why did she take on this open-air evening dance project? For the joy of dancing and to share that joy with as many people as possible. And it feels good to dance outdoors rather than in a dark hall or bar. “We welcome everyone, even people who’ve never danced before,” says Annie. “The evenings start with a short lesson to learn the dance step. After 45 minutes, everyone is ready to go. I even find partners for people who come alone, so there’s no excuse not to come!”

The activity is so popular that every Wednesday, the concrete surface that serves as a dance floor overflow with dancers. Nearly 300 dancers regularly show up. “People even dance on the grass, the fun is so contagious.” For Annie, Les Jardins Gamelin are a magical setting for her evenings. “It’s a superb space, accessible to everyone. It’s as if a fairy had come and tapped her wand to transform the space. Right from our first evening, we said the space represented Montreal at its best, and it encourages us to rediscover our city.”

Pépinière & co. is the designer of Les Jardins Gamelin, and Élisa Schneuwly is the coordinator responsible for hosting artists and activities.

“The Quartier des Spectacles Partenership put a lot of thought into the programming for Les Jardins Gamelin. In addition to new events and festivals already at Place Émilie–Gamelin, it wanted to present inclusive activities that would involve as many people as possible from the Quartier des Spectacles and the borough of Ville-Marie, which is also a partner in Les Jardins Gamelin,” says Élisa from Pépinière & co. “The idea was to introduce visitors to a wide variety of cultural, community and social activities.”

She was herself surprised by, among other activities, the Soul Lunches on Thursdays at noon, where Andy Williams plays funk, techno and soul for the crowd. “The Sunday karaoke events [starting at 1 p.m.] have also been a nice surprise. They’re a wonderful moment of unity and the pleasure of doing something together, so they attract all kinds of people. Every day, Les Jardins Gamelin gives people a space to relax and enjoy Montreal – for free. And, of course, to enjoy a fun surprise or two!”

The Quartier des Spectacles Partenership assigned Pépinière & co. the mandate to search and program events, as well as hosting certain artists and activities.