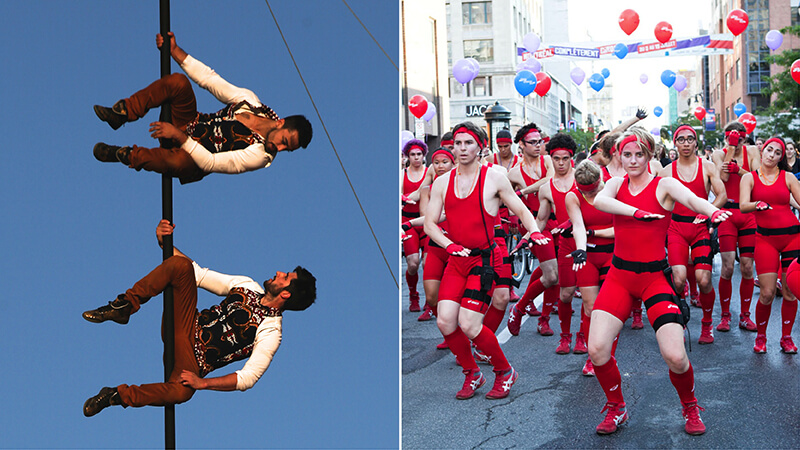 Montreal has always been a circus town, and for the sixth year in a row the Montréal Complètement Cirque (MCC) festival is adding a unique dimension to summer. From July 2 to 12, the all-new show Duels will be presented for free every evening (except July 6) in Place Émilie-Gamelin. On the same dates, Saint-Denis Street hosts the Minutes Complètement Cirque, a series of spontaneous circus acts that will enchant and inspire passers by.

Anthony Venisse and Lucie Vigneault, the events’ producer/director and choreographer respectively, gave us a sneak preview of the festival’s outdoor programming, under the banner “La rue Complètement Cirque”, and of the new Duels show.

Is the street a natural home for the circus arts?

“The festival’s outdoor spaces allow us to reach everyone. And for Montréal Complètement Cirque in particular, performing in the street is a way to celebrate the popular side of this ancient art. It’s a setting that brings people together,” Mr. Venisse explains. “In the street, the show comes to the people, not the other way around. It’s special!” adds Ms. Vigneault, who stresses the stunning character of the performances given on Saint-Denis. “At first spectators are surprised, because they find themselves in the middle of the action, surrounded by dozens of artists. Then, the magic takes hold and after a short routine, everyone parts ways under a spell. It’s always a very joyful encounter,” she says.

How would you describe the Minutes Complètement Cirque, one of the festival’s key events?

“It’s a spontaneous gathering of 34 artists we call the Minute-artists. They dance and play as they wander Saint-Denis Street, leading people to a specific spot where they put on a one-of-a-kind show using the street as a set,” Mr. Venisse explains. There are three themes this year: the 3-arches minute at the corner of Sherbrooke and Saint-Denis, an aerobatic minute on the roof of the Azimut store at the corner of Ontario and Saint-Denis, and the big game in Place Pasteur, “a 20-minute game with a host, in which the public can participate,” he adds, promising plenty of surprises!

Who are the artists in Duels and the Minutes?

“Typically, we come up with the concept and start thinking about the structure of the show and specific numbers in the fall,” Mr. Venisse explains. “This year, we had two basic elements to work with: we wanted a tower as the focal point, and we also wanted to take over Place Émilie-Gamelin as if the whole space were one big stage. The idea is to break out of the confines of a typical stage space.”

Ms. Vignault’s choreography work starts after the initial concept is developed. New numbers are created every year, because they are designed for the specific artists who will perform them. “Shows like this are a huge creative challenge,” she admits. “Although we rehearse in the studio, a big part of the creative process happens on-site. We set up in Place Émilie-Gamelin less than 10 days before opening, and there’s still creative work to do and performances to be adapted to the site.”

What should we expect from Duels?

“The core of the show is the duality between the group and the individual. In addition to the 34 artists, around 20 citizens will augment the cast of professional acrobats and dancers,” Ms. Vignault explains. “These citizens, who are between 13 and 65 years old, from all backgrounds, add another dimension to the show and embody citizen involvement,” Mr. Venisse adds. “Like a Greek chorus, they will amplify the performers’ colours and movements and serve as a counterpoint to the acrobats.” The creators of Duels were inspired by inner struggles and the search for balance, but the public can expect a dynamic show with plenty of surprises.

As part of LA RUE COMPLÈTEMENT CIRQUE
Location: Place Émilie-Gamelin
Dates: From July 2 to July 12 (Except on July 6)
at 7 PM and 10 PM