A most curious Nuit Blanche

The high point of MONTRÉAL EN LUMIÈRE, it's an event that embodies Montrealers' marvelous creative diversity and festive spirit.

Personally, I love the Nuit Blanche. Why, you ask? Simply because it lets us wander into a world of fantasy. The Nuit Blanche is a kind of waking dream, an overflowing of creativity, an euphoric (and drug-free!) trip where your five senses aren't enough to take in the creativity coming at you from all sides! If you've never seen any of the eight earlier editions of the Nuit Blanche, you might think that I'm being a little excessive. Well, think again! 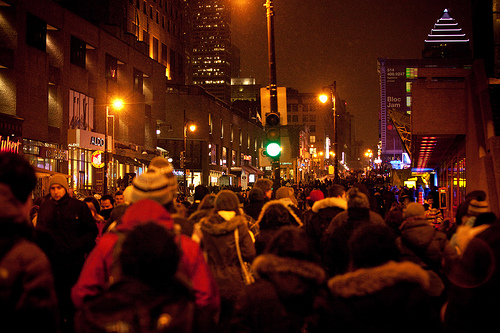 I remember last year. The weather was warm and damp, and snow drifted in on occasional flurries. In the middle of the night, a diverse crowd moved through the different areas of the festival in a cheery, almost comedic mood. I remember eating a tasty fish soup under the stars, watching funny animated projections, seeing people dance around me. I caught a few concerts, some indoors, some outside. I went ice skating... without skates! I took part in an interactive film short. I saw exhibits, installations, performances. I even joined a fascinating guided tour through the city's innards – but I have to stop there. I'm kidding myself if I think I can describe everything I saw, tasted or heard that special night. I probably can't remember a third of what i did! That's what's so marvelous about it: that the Nuit Blanche has so many personalities, like a dream that shifts and shimmers before vanishing altogether.

To get an idea of what you're in for, check out this slideshow of the 2011 Nuit Blanche.  Even if the images can't do justice to the scale of the event, they can give you a glimpse of what it's all about, and they'll surely make you want to join in the fun this year!

About the Nuit Blanche

This is the 9th annual edition of the Montreal Nuit Blanche. The first Nuit Blanche took place in Paris in 2002 as an original idea of Christophe Girard, deputy culture officer in the Paris mayor's office. Since then, the concept has spread to over twenty cities around the world, and shows no signs of slowing down.

The 2012 Nuit Blanche consists of more than 170 activities in three districts and one pôle: Quartier des spectacles et Centre-Ville, Quartier Vieux-Montréal, Quartier Plateau-Mont-Royal et Mile-End and the Pôle Parc olympique. They're easy to get to, not just by metro – which will stay open all night for the occasion – but also thanks to a system of free shuttle buses that make it simple to get from one area to another.

How to choose from among this array of activities?

A magical, unpredictable and eclectic night

With friends, with family, by two or by yourself, there's something for everyone – yes, even if it sounds clichéd to say it! From sundown to the wee hours of the night, the Nuit Blanche invites you to discover (or rediscover) a constellation of artists in a thrilling, almost surreal atmosphere.

Let yourself be siezed by wonder. Wake up your inner night owl. Go crazy!