From November 20 to 22, the Quartier des Spectacles will shake to new world rhythms of the Vision Diversité movement, celebrating its fifth anniversary this year. What’s so new about it? These artists, who you’ll see at L’Astral and at the Espace culturel Georges-Émile Lapalme in Place des Arts, were born around the world and have one thing in common: they’re Québécois.

Le Grand Rendez-vous des musiques locales métissées is what they’re calling this free event, which will take place from Sunday to Tuesday. On Sunday, November 20 and Monday, November 21, 23 groups and more than 100 Quebec artists will show off on stage to mount a mix of Montreal musics.

This unique encounter will continue on November 22, with the launch of Arometis. It’s a fantastic new adventure, a project created by a group of 17 artists who combined their talents and mashed up their musical universes to record an eponymous album of 13 original songs. 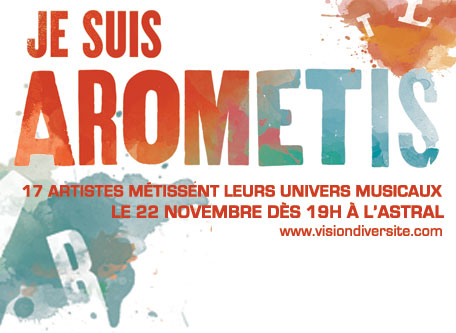 “It’s a new kind of mix” explains Vision Diversité artistic director Paméla Kamar. “We started with songs by Quebec artists, songwriters and performers, and transformed them by combining them with different cultures. It’s a first for Quebec.”

Le Grand Rendez-vous des musiques locales métissées is an unprecedented cultural encounter. The participating artists will present 20-minute excerpts from their work at four performances: at 6 PM at L’Astral on November 20 and 21, and at noon and 4 PM on November 21 at the new Espace culturel GEL in Place des Arts. Three “crowd favourite” prizes, awarded by La Vitrine partners, will be announced at 8 PM on November 22 at L’Astral.

Quite simply, all cultures and genres of music will be on offer. Three days of performances will take you through jazz, soul, funk, flamenco and rock, to name only a few. You’ll hear instruments from the four corners of the globe, like the Arab oud or the African kora. We haven’t even mentioned the artists themselves, who will splash the event with their own colours and flavours.

Though many of them were born abroad, some are also Québécois de souche. One fine example is the drummer Éric Breton, a musician born here who has spent 15 years specializing in percussion from around the world. He’s also part of the Arometis group.

Beyond a wild combination of music, it’s a chance to get into the human and cultural mix. All you have to do to join the celebration this November 20, 21 and 22 is show up at the heart of the Quartier des Spectacles. And – have I mentioned this already? – it’s all free!