The payback starts now: it’s barely more than a week before Arcade Fire lights up the Place des Festivals in the Quartier des spectacles. If you didn’t already know, the Montreal band will play a special free concert for the 10th anniversary of the Pop Montréal festival on September 22. And let it be known far and wide: this is a must-see concert!

When it came time to plan the program for the 10th edition of the Pop Montréal festival, the organizers weren’t content to plod along on autopilot. The names of many popular bands were bandied about, but there was no question that the Thursday night of the festival would be the biggest draw. Starting at 7 PM, Kid Koala will start getting the Place des Festivals moving, showcasing the skills of this top Canadian turntablist and putting the crowd in the right mood. 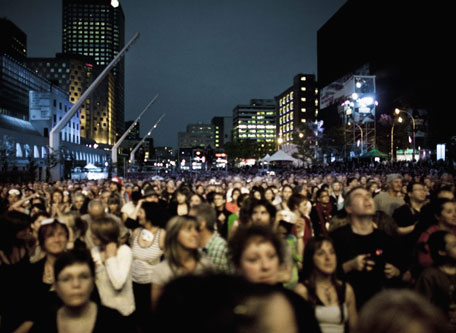 At 8 PM, the Quebec group Karkwa will belt out its best rock tunes before Aracde Fire itself gets on stage closer to 9 PM.

A gesture of thanks for Montrealers

This completely free outdoor show will cap the end of the band’s exhausting international tour, presenting some hits from The Suburbs and offering a glimpse of the end of summer. Wherever they play around the world, Arcade Fire members keep praising their Montreal fans, without whom they would have never been able to become who they are at present: an independent rock band that is able to tour several continents on its own.

It’s something that is always present in their awaremenss. Thus, they decided to present a free show as a gesture of thanks.

Win Butler, the singer of the group, even said it when Arcade Fire won a prestigious Grammy award for album of the year: “What the hell. Thank you. Merci Montréal. Thanks for giving our band a home.”

The September 22 show will likely be full of emotion. It will be another opportunity for the Montreal public to interact with a Montreal band they’ve been following since its early days.

According to Pop Montréal executive producer Hilary Leftick, the show is also a huge logistical feat. “The quality of the sound and the lighting will make this an even more impressive show”, she said.

The last album from the Arcade Fire, The Suburbs, came out in August 2010, inspired by a particularly North American boredom with the urban fringe. It’s yet another reason for Quebec people to feel that they are characters in the songs and lyrics that they wlll hear on September 22.

Go read this article to see everything you need to know to prepare yourself for the show.