21 BALANÇOIRES, a musical collaboration from Andraos & Mongiat, at the Promenade des Artistes

21 BALANÇOIRES is an exercise in musical cooperation that is half street furniture, half game. A collective instrument, it's the work of artist-designers Mouna Andraos and Melissa Mongiat, both recipients of the Phyllis Lambert Grant 2010, and well-known in the new media scene. Luc-Alain Girardeau, professor of animal behaviour at the UQAM Faculté des Sciences, helped develop the concept.

The first thing you must know is that 21 BALANÇOIRES ("21 Swings") is located on the Promenade des Artistes. This new urban space links the Place des Festivals with Le Parterre, along de Maisonneuve and Président-Kennedy. For a long time, it has run up the middle of a bustling spot that Montrealers wryly think of as the workshop of performances, a busy backstage area.This spring, it steps into the limelight, as rushing traffic has given way to new connections between new spaces that Montrealers can call their own.

The Promenade des Artistes is located on #2

On the Promenade des Artistes, the 21 Balançoires will offer passersby a chance to take part in a cooperative musical experience, at once playful and poetic, just for the simple pleasure of it.

Intriguing? Definitely. Inviting? Absolutely! A few days before the unveiling, I sat down with the two designers of 21 BALANÇOIRES. 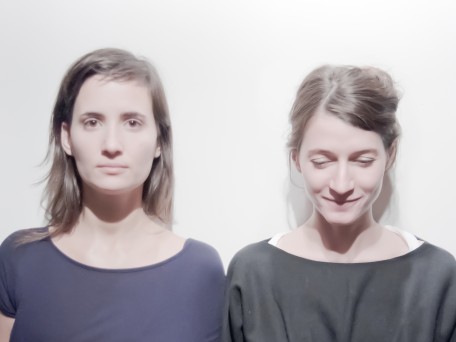 How did the concept develop?

Mouna Andraos (M.A.) : There's Place des Arts to onc side, and the UQAM Pavillon des Sciences to the other. It's the ideal spot to build a bridge between the arts and the sciences.

Melissa Mongiat (M.M.) : When you work in the urban environment and its context, the first question you ask is: who goes past here? Students, science professors, the people who work at Place des Arts, and the public.

M.A.: We were directly inspired by the seven structures on the Promenade (that we call event showcases). They're used as kiosks for the festivals, or as exhibit spaces.

M.M.: Those vitrines were our starting point. We wanted to play with the new street furniture, to use it in a surprising way!

What inspired you to use swings?

M.M.: Everywhere in the world, there's always movement around swingsets. It's a peaceful way of appropriating public space. You can see that pretty much everywhere, throughout big cities. When we saw the vitrines, we wanted to hang swings off of them, to give people a chance to play between two traffic corridors. 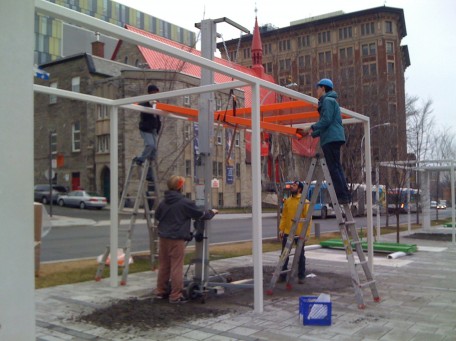 During the installation of 21 BALANÇOIRES

M.M.: Each swing is an instrument for you to discover. Depending on how you swing, it generates different notes.

M.A.: To make music, you need more than one person. And to make that music evolve, you have to communicate with the other person, in one way or another!

M.M.: There necessarily has to be some kind of conncetion between people, by looks, by reactions, by adjustment... What people are going to hear will depend on what everybody does. And that's the part that, for us, is fascinating: we're in the middle of downtown, passersby don't know each other, and we're excited to see how they react and cooperate!

Professor Luc-Alain Girardeau, who studies the phenomenon of cooperation among animals, volunteered to work with you. How did his expertise as a biologist make its way into the 21 BALANÇOIRES project?

M.M.: Mouna and I are working in an interactive environment: we install strange instruments, that people don't know, in a public space and we try to see how they intuitively use it following the clues that we give them. There's an overlap between our artistic exercises and Luc-Alain's practice. We share the same vision of cooperation, of play, of learning.

M.A.: When a biologist wants to teach an animal something, he gives the animal clues and hints that lead it to understanding. We found some very funny connections between the methodologies that he uses with animals, and the work we do with the human public!

M.M.: Basically, it's all patterns of behaviour. And us, we play with how people behave: we stimulate their curiosity, we give them hints to understand how to use what we present to them.

M.A.: Luc-Alain saw, in our desire to create group projects, parallels with his work on cooperation among social animals. They cooperate because they're more powerful in groups. We wanted to demonstrate how a group of individuals can work together to create something bigger than what they can do working alone. With this project, the collaboration results in music.

M.A.: We chose a sound that's more classical, because we think that will appeal to the broadest range of people. It's also a wink at the OSM, which is moving in next door to the Promenade soon. We liked the idea of balancing a very high-tech installation with a very classical kind of sound.

M.M.: The composer Radwan Ghazi Moumneh did an amazing job putting it to music. He literally created a new instrument! He gave people the key.

What effect do you think 21 BALANÇOIRES will have on people?

M.M.: I hope that they let themselves be carried away by the magic of the performance that comes to life with their participation.

M.A.: And the reflection that it sparks in people, like how we can work together in this context to create something beautiful, that could maybe apply a lot of other contexts where we want to come together to make something better...

M.M.: I also think that 21 BALANÇOIRES can improve the social fabric of downtown. We need more cooperation, across all domains! There's a whole heap of conferences around the world where it's been shown that people want to work together for different ends. We find it interesting to apply this concept of cooperation more concretely, but in a totally poetic way...

M.A.: Now we're impatient to see if people are going to jump in the water!

I'm excited to try 21 BALANÇOIRES during the unveiling of this 30,000-square-foot musical instrument at the Promenade des Artistes, this Thursday at 5:30 PM. Afterwards, the swings will be open to the public every day from 10 AM to 11 PM, until May 23rd.

Montrealers, is it time for a little cooperative session of games and music? It's a date!