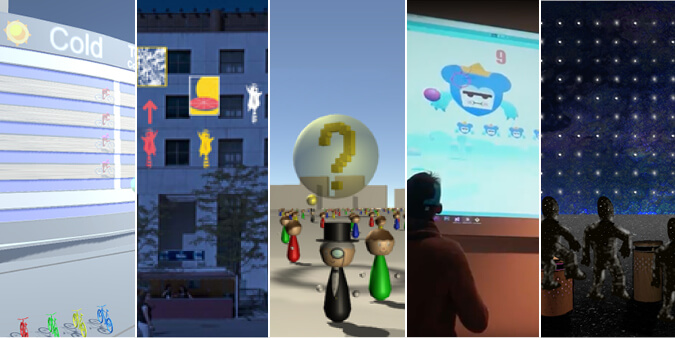 Montréal, March 1st, 2017 – The Quartier des Spectacles Partnership is pleased to announce the five winning projects from the "Playable Public Spaces" Game Jam, a friendly two-day competition held as part of the JamNation series spearheaded by the Guilde - Quebec's association of independent game developers - and the Start-Up Numix Awards.

Working on the theme of "Having fun in public places," 16 multidisciplinary teams of graphic designers, user experience and interface designers, programmers and sound designers came together to create original, detailed and buildable prototypes for games designed for public spaces. All teams submitted a game model that worked within parameters set by one or several of the event's partners.

Five grants totalling $50,000 were awarded by the Quartier des Spectacles Partnership, in collaboration with the Radio-Canada digital services, the Université du Québec à Montréal and IBM. The grants will allow the winning teams to continue developing their prototypes to present them during a public event in the Quartier des Spectacles in May 2018.

Several evaluation criteria were used in selecting the winning projects, including originality and artistic character, quality of the user experience, and the project's potential for development and deployment. The game also had to work within parameters set by the partners.

In addition to the grants, the winners will receive professional guidance and financial support. The Quartier des Spectacles Partnership and each of the partners will specify the type and amount of support they will offer in order to ensure the successful completion of the winning prototypes. 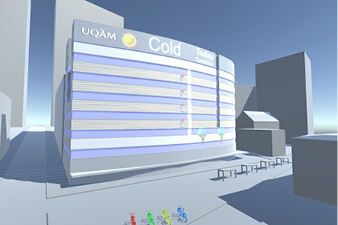 Montréal Roule is a playful family experience integrated into the urban environment. The game's goal is to get people to participate in a shared activity: a bicycle race. Racers must overcome obstacles and inclement weather. 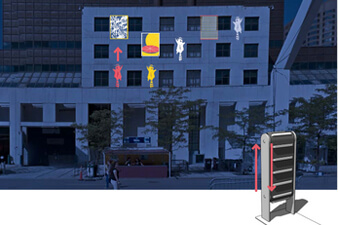 Raccoons climb a building like mountaineers, trying to reach the top while avoiding obstacles. During their climb, objects and information fly by. Players use physical controls to help the animals complete the climb. 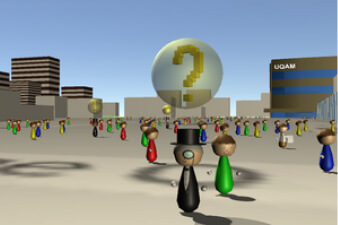 An event-based game in the form of a fun, educational augmented-reality treasure hunt held in the Quartier des Spectacles. 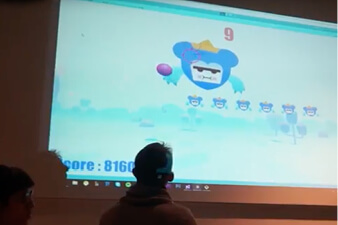 A giant creature appears, representing one of the four seasons. The goal of the game is to make the monster lose its control over the current season. Players use their mobile devices as controllers. 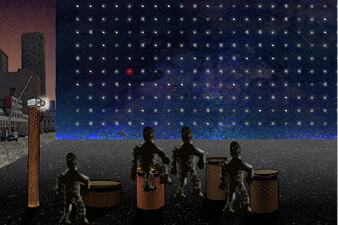 Consisting of a set of benches placed close to one another, the goal of the installation is to discover the constellations hidden in an image. Each bench is equipped with an interactive device that produces sound and light, and the entire installation generates a sensory environment that changes and evolves based on players' actions.

"Today, more and more cities are awakening to the importance of adding playful elements to their public spaces, offering residents and visitors new kinds of experiences that change their relationship with the city. Games, as well as many other creative initiatives, are a fantastic way to encourage the re-adoption of public spaces. Our association with La Guilde and organizations like Radio-Canada, UQAM and IBM is a natural fit with our interest in encouraging new organizations and artists to animate public spaces," said Pierre Fortin, executive director, Quartier des Spectacles Partnership. "Bravo to the winning teams, who will help enrich the Quartier's creative programming!"

"In the next few years, we will see Quebec's video game industry move away from traditional consoles in favour of mobile devices and public spaces. La Guilde is very proud to be part of this initiative, which encourages video game creators to imagine games outside of their traditional framework. We applaud the initiative and hard work of the Quartier des Spectacles Partnership in making this important gathering happen," added Pascal Nataf, vice-president, La Guilde des développeurs de jeux vidéo indépendants du Québec.

"In our evaluation process, the Montréal Roule project stood out for the way it integrates media concepts while offering a novel experience combining physical and digital elements, including the potential to customize every element. We see potential for group engagement, which encourages people to move and that can be linked to any type of theme or activity, such as sporting or athletic events. It is an inspiring project that we can also envision working well on a site such as the grounds of Montreal's new Radio-Canada headquarters," said Maxime St-Pierre, executive director digital services, Radio-Canada.

"We were won over by the game's concept, which is built on collaboration and interaction among players, with the goal of revealing everything behind the game's surface, in this case the façade of a UQAM building," said Nathalie Benoit, director of institutional promotion, Université du Québec à Montréal. "That goal also aligns with our commitment to support knowledge and creativity beyond the university."

"IBM is very proud to have partnered with in an extremely rewarding and inspiring event. Our developers and experts in the field of gaming have been amazed by the creativity and quantity of talented individuals who participated. We were ecstatic to see the rapid adoption of our cloud platform (IBM Bluemix) and our cognitive services (IBM Watson). This allowed the participants to innovate and accelerate the development of their game."

La Guilde des développeurs de jeux vide?o inde?pendants du Que?bec is a non-profit cooperative driven by the commitment of Quebec-based video game studios of every size and type to building a strong, sustainable ecosystem founded on the values of cooperation and sharing. La Guilde is the world's largest association of its kind, representing more than 120 studios. It organizes and supports events aimed at establishing a cooperative network among industry players and democratizing video games for the Quebec public. Its primary goal is to ensure that Quebec remains a world leader in the video game industry. To learn more, visit the association's website:

Radio-Canada's digital media team is responsible for developing deployment strategies for Radio-Canada's digital ecosystems. Using an audience-oriented approach, the team develops digital strategies in collaboration with different departments, with the aim of implementing and driving the evolution of innovative multi-platform products and services for all citizens. By inviting citizens to participate in a wide range of social debates through a portfolio of websites and mobile applications, the digital services division contributes to the advancement of democracy and culture while adhering to Radio-Canada's values as a public service.

A true urban university with the most complete arts curriculum in the country, UQAM is the only Canadian University offering courses in every artistic discipline, at the undergraduate, Master's and PhD levels. In the field of communications, UQAM is Canada's largest French-language training centre, with students and graduates distinguishing themselves year after year, both nationally and internationally.

The Quartier des Spectacles is Montreal's cultural heart, boasting North America's most concentrated and diverse group of cultural venues. The district is the year-round host to countless festivals and events, many of which include free outdoor shows and activities. The Quartier hosts innovative urban installations involving cutting-edge lighting design, immersive environments or interactive digital spaces. Year round, the Quartier presents artistic video projections on several building façades. The Quartier des Spectacles is a showcase for new multimedia technology, making Montreal a global leader in the urban exhibition of digital content.

The Quartier des Spectacles Partnership, founded in 2003, is a non-profit organization with more than 70 members active in the district. It is responsible for animating the Quartier des Spectacles by programming cultural activities, managing and animating public spaces, providing distinctive illumination, and promoting the Quartier as a must-visit cultural destination. The Partnership is supported by the Ville de Montréal and the Secrétariat à la région métropolitaine. For more information, visit