LUMINOTHÉRAPIE IN THE QUARTIER DES SPECTACLES: UNVEILING OF IMPULSE AND OPENING OF THE 2016 CALL FOR PROPOSALS!

Montreal, December 9, 2015 – Montrealers and visitors are invited, from December 10 to January 31, to explore Impulse, a winter installation comprising 30 giant seesaws that will transform the Place des Festivals into a vast illuminated playground, accompanied by a set of all-new video projections. The creation is the work of Toronto-based firm Lateral Office and Montreal-based CS Design, in collaboration with EGP Group of Montreal.

The consortium, chosen through an open competition for the sixth annual Luminothérapie event, has created a playful interactive space that will warm hearts of all ages during the cold season. The official unveiling of the works, with the creators in attendance, will take place today at 5:30 p.m. on the Place des Festivals. The event, featuring music, braseros and food trucks, is open to all.

“Every year, we are eager to give Montrealers a new creative winter experience in the heart of the Quartier des Spectacles. Luminothérapie’s public installations transform our relationship with the city, beautify it, and give it a wonderful friendly touch. Luminothérapie also keeps Montreal shining bright around the world as a hub of interactive art,” said Chantal Rossi, Ville de Montréal Associate Councillor Culture, Heritage and Design.

The interactive work on the Place des Festivals presents a series of giant illuminated and sound-producing seesaws. To activate them, visitors straddle them like any other seesaw. Once in motion, the built-in lights and speakers produce a harmonious sequence of sounds and lights, resulting in a constantly evolving ephemeral composition.

Through the use of architectural lines, a hypnotic soundtrack and an entertaining illusion of depth, the nine architectural video projections echo the seesaws of the Place des Festivals. Playing with the notions of balance and unbalance, symmetry and asymmetry, tension and harmony, the video projections are visual experiments illustrating the original soundtrack created for each video.

IMPULSE is an urban installation that renews itself for every different audience. Each person becomes, while on the seesaws, the player of a novel instrument. 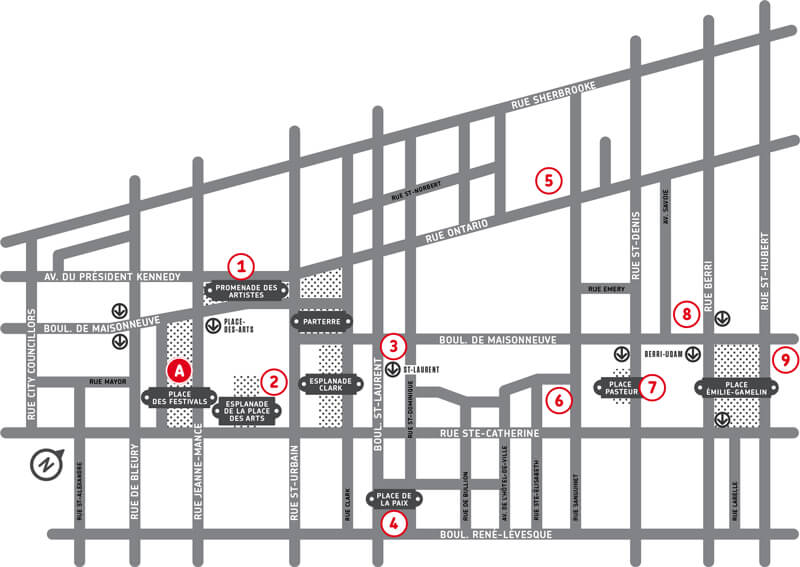 30 seesaws with light and sound

The Bureau du design of the Ville de Montréal collaborates with the Quartier des Spectacles Partnership to plan and produce Luminothérapie.

Further information about Luminothérapie and the creators behind the 2015 edition: quartierdesspectacles.com/lumino

The call for proposals is officially open for Luminothérapie 2016-2017, Quebec’s largest competition for temporary public art installations. The goal of the multidisciplinary competition is to produce an original winter-themed interactive experience in the Quartier des Spectacles and to stimulate creativity in the disciplines of urban installations and digital art.

THE COMPETITION – A REFRESHED CONCEPT

For this seventh edition, the Quartier des Spectacles is bringing something new to the competition by providing a theme: participants must work within the theme “tale”. Chosen for its narrative power, the tale – which can take many different forms (fantastical or urban, classic or newly created) – must provide a captivating experience.

“We are very proud to give creators a unique opportunity to express their talent and original vision, particularly for this seventh edition with its special theme. We want to inspire artists to further their exploration of narrative in their work, while keeping sound and light at the heart of the Luminothérapie experience,” said Jacques Primeau, chair of the Quartier des Spectacles Partnership.

From December 8, 2016 to January 29, 2017, the winning designers will present an installation on the Place des Festivals that creates a sense of wonder both day and night, while encouraging the participation of a broad audience, including families. Architectural video projections for two adjacent building façades will complete a unified concept through integration with the narrative structure of the primary work.

The registration deadline for the competition is February 5, 2016. Competitors’ proposals must be submitted by noon Eastern Standard Time on February 16. The free competition is Canada-wide and open to teams whose lead designer is based in Canada.

The competition has two phases: in the first, proposals are reviewed anonymously (to ensure impartiality and openness to new talent); in the second, the finalists selected in the first round will give a presentation to the jury.

The jury will favour projects that combine a variety of perspectives by bringing together multiple disciplines: design, the performing arts, visual and media arts, etc. The total production budget is $300,000.

The registration form, rules and evaluation criteria are available at quartierdesspectacles.com/en/request-for-proposals/

The jury for this seventh edition of Luminothérapie has nine members:

A COMPETITION THAT HELPS OUR CREATORS MAKE A NAME FOR THEMSELVES

In recent years, several designers and artists have won awards after creating works for Luminothérapie, namely Lüz studio, Champagne Club Sandwich, KANVA and Lucion Média. Luminothérapie also generates considerable interest outside Quebec. In addition to substantial media coverage, some works have been well-received abroad, including Trouve Bob in Moscow and Iceberg (2012-13) by ATOMIC3 and Appareil Architecture in Brussels.

The Quartier des Spectacles is Montreal’s cultural heart, boasting North America’s most concentrated and diverse group of cultural venues. The district is the year-round host to countless festivals and events, many of which include free outdoor shows and activities. The Quartier also hosts innovative urban installations involving cutting-edge lighting design, immersive environments or interactive digital spaces. Thanks to the Place des Festivals and the world’s most extensive set of architectural video projection facilities used exclusively for presenting artistic content, the Quartier des Spectacles is an extraordinary creative space for designers. The Quartier des Spectacles is an international showcase for new multimedia technology, making Montreal a global leader in the urban exhibition of digital content.

THE CREATORS OF IMPULSE

Founded in 2003 by Lola Sheppard and Mason White, Lateral Office is a Toronto-based experimental design firm that operates at the intersection of architecture, landscape architecture and urbanism. The studio sees architecture as a response to complex, urgent questions in the built environment, engaging in the wider context and climate of a project – social, ecological or political. The firm’s recent work and research focuses on powerful design relationships between the public realm, infrastructure and the environment.

CS Design was founded in 2008 by Conor Sampson. A wide array of architecture, landscape architecture and engineering firms have hired the firm to design lighting for parks, heritage buildings, monuments and artworks. CS Design’s areas of expertise include electric lighting and programmable control specification, custom fixture design, daylighting in buildings and public spaces, and energy efficiency.

Egli Gallaccio Palanca is a Montreal-based consulting engineering firm. Thomas Egli is a civil engineer and president of Groupe EGP. He has worked on numerous large-scale projects and is a professor of civil engineering at McGill University.

Mathieu Le Sourd (Maotik) is a Montreal-based digital artist who creates immersive multimedia environments and generative visuals. His work has recently been presented in festivals around the world such as Live Cinema in Rio, the Plums Festival in Moscow, Visiones in Lima, the Mutek Festival in Barcelona and BFIDigital Québec in London.

Iregular is a Montreal-based studio founded in 2010 by visual artist Daniel Iregui. Working at the intersection of art and technology, the studio approaches design using a code-driven, real-time mindset. As creators of audio-visual experiences for installations and websites, Iregular’s work combines geometry, typography, light and sound with software, mathematics and algorithms. The result: systems with infinite possibilities, making every instant in each project unique.

Mitchell Akiyama is a Toronto-based composer, artist and scholar. He has released over ten records on such labels as Raster Noton, Sub Rosa and Alien8, in addition to works on his own imprint, Intr.version Records. He has scored numerous films and dance performances. Akiyama has received commissions from, among others, the Akousma Festivals and the Nouvel Orchestre D’aujourd’hui. He has performed across Europe, Japan, Australia and North America in concert halls, clubs, art galleries, fallout bunkers and festivals including Sonar, Mutek and Send + Receive.