MAY 19: LES JARDINS GAMELIN OPEN FOR A THIRD SEASON 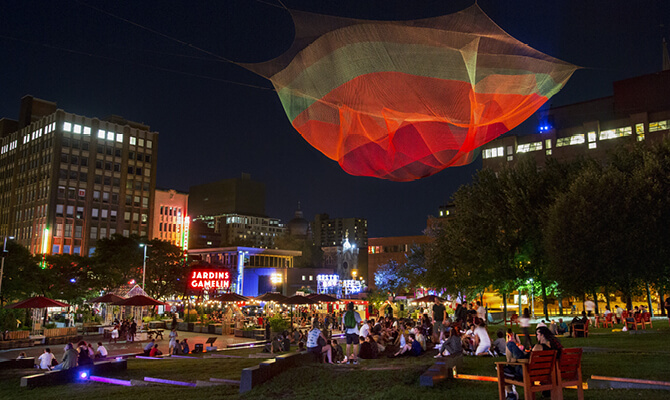 Montreal, May 8, 2017 – Montrealers and the media are invited to participate in the opening night festivities for the third season of Les Jardins Gamelin, on Friday, May 19 starting at 5:30 p.m.. With their warm ambiance, illuminated canopy, friendly patio surrounded with greenery, delicious snack bar and activities seven days a week, Les Jardins Gamelin have become an essential gathering place for Montrealers and visitors. From May 19 to October 15, everyone is invited to have a drink or a snack, take part in family fun, dance, see a show and discover something new – all for free.

A BIG OPENING PARTY ON MAY 19

The evening’s festivities will provide a taste of the atmosphere to be found in Place Émilie-Gamelin until October 15, as well as kicking off the spring-summer season in the Quartier des Spectacles. DJ Speakeasy Electro Swing will get the ball rolling at 5:30 p.m.. The evening will follow with a dance lesson by Salsafolie (6:30 p.m.) and music by pianist Henri-Pierre Noël (7 p.m.), originally from Haiti, who will bring some sunshine to the Jardins with his kompa funk tunes. Rounding out the evening’s entertainment, the Montreal-based duo Skinny Bros (Paul and Christophe Cargnello) will perform a groove, R&B, soul and rock set to get the Jardins hopping at 8 p.m., followed by POIRIER and his legendary energy from 9 p.m. until closing.

The Jardins bring a high-energy touch to spring and summer in Montreal with a rich, diverse program of activities and entertainment, including some new features and the return of the classics that have made the Jardins a huge success since their inaugural season in 2015.

Montrealers will be happy to see the return of 1.26, the iconic hanging sculpture by Janet Echelman, as well as the illuminated sculpture by Melvin Charney and video projections on the side of Place Dupuis. In collaboration with MU, there will be a new work on the ground by artist Ilana Pichon, who will decorate the entrances to the Jardins on Sainte-Catherine St.

A FEAST FOR THE EYES AND EARS

Les Jardins will once again be the place to discover new art and music – and have a lot of fun in the process. Several programming partners will fill the air with music every Thursday and Friday at lunchtime, while live music kicks in at 7 p.m. Indie folk, blues, world music, chanson: there’s something for everyone. Plus, ICI Musique will provide ambient music throughout the season.

In July, get ready for Les Jardins Gamelin complètement cirque, an entire month of exciting circus events presented in collaboration with Montréal Complètement Cirque! Their all-new show, Rouge, will play every evening at 7:30 and 10:30 p.m. from July 6 to 16 and at 7 and 10 p.m. from July 17 to 30.

Throughout July, the public can enjoy acrobats and other circus artists weekdays at lunchtime and happy hour. There will also be a participatory zone, to get everyone in on the fun. Be there weekdays at noon and 5 p.m., and Saturdays at 11 a.m.

To make it possible to present an eclectic program for all audiences, the Quartier des Spectacles Partnership is once again working with its many partners, including several festivals and community and cultural organizations:

Dominic St-Laurent and his team from BallPark restaurant are returning to serve their modern snack-bar fare with a Montreal touch. Check out the lunch specials, have a snack with a cocktail, or enjoy dinner with the kids – there’s a new menu just for them. You’ll love the snack bar’s delicious salads, homemade burgers and fries and other seasonal dishes inspired by the nearby vegetable gardens or activities taking place in the Jardins. For a little something sweet, the Jardins will also include a dairy bar this year. Yum!

Plus, the snack bar in Les Jardins Gamelin will serve breakfast on the lawn every Saturday and Sunday this summer, from 10 a.m. to 2 p.m. Come pick up a picnic basket and blanket, find yourself a spot on the lawn and revel in a delightful Montreal morning.

EVEN MORE GREENERY FOR LES JARDINS

The ever-popular urban agriculture activities will be back, once again led by Sentier Urbain. True to its mission of encouraging communities to be greener, for three years the organization has been designing and running the urban agriculture portion of the Jardins Gamelin program. This season, the Jardins will feature seven theme gardens and nearly 60 planters around the patio and Place Émilie-Gamelin.

Members of the public interested in gardening, growing food and enjoying the season’s harvest can participate in the Découverte des Jardins activity every Tuesday from 5 to 7 p.m., including a tour of the gardens and a presentation on one of several urban agriculture themes. Focusing on the ins and outs of vegetable gardening, the Sentier Urbain workshops return every Sunday from 11 a.m. to noon with a variety of practical topics: planning a kitchen garden, making bird houses, treating sick plants and more.

In the spring of 2015, Place Émilie-Gamelin showed a new face to Quartier des Spectacles residents and visitors with Les Jardins Gamelin, open from May to October. A large, green and inviting civic space in the heart of downtown, Les Jardins Gamelin is an original temporary layout comprising a set of versatile facilities. The space’s unique, accessible and human-scale programming has become a part of daily life for residents and visitors, making Les Jardins Gamelin an inclusive gathering place in true Montreal style. The initiative, led by the Quartier des Spectacles Partnership, is produced in collaboration with Pépinière & co, Sentier Urbain and numerous partners, with the financial support of the borough of Ville-Marie.

Les Jardins Gamelin are open daily until 11 p.m.
All activities are free.