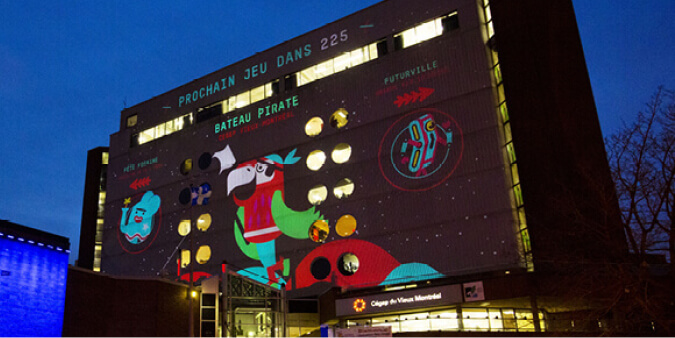 Montreal, January 30, 2017 – The Quartier des Spectacles Partnership, in collaboration with the Université du Québec à Montréal, presents the second edition of a conference on strategies for occupying and animating public spaces. The day of panel discussions and presentations will be followed by a two-day Game Jam organized in collaboration with La Guilde des développeurs de jeux vidéo indépendants du Québec and Start-Up Numix. From February 10 to 12, discover how to make gaming part of urban life with these two events on the shared theme of “building playable public spaces.”

THE CITY: WHERE EVERY EXPERIENCE IS POSSIBLE

The conference will explore ways of animating the city and its public spaces through projects that deliver playful or educational experiences. The conference will explore the latest achievements in this area both locally and elsewhere, and investigate new possibilities opened by digital technology: enhanced and virtual reality, architectural video projection, location scouting, sensory experiences and more. Urban development commentator Marc-André Carignan will moderate the day’s activities.

Several guests, all leaders in the field, will present surprising and innovative initiatives for the gaming-oriented use and activities for public spaces. The guest experts invited by the Partnership and UQAM will be representatives of Playable City, a firm based in Bristol, England, and KaBOOM!, from the United States. These two major players have developed initiatives that put games and people at the heart of plans for the city of the future.

The program is appended or can be viewed online.

Presented as part of the JamNation series launched by La Guilde, the Game Jam is a friendly two-day competition during which teams of designers, engineers, developers, architects and students will be asked to build a game prototype. Because of its association with the Quartier des Spectacles, the Game Jam will have the theme of “playable cities”. Participating teams will be asked to apply their talents to public spaces with the goal of producing original, tangible and buildable prototypes.

Five grants with a total value of $50,000 will be awarded by the Quartier des Spectacles Partnership in collaboration with Médias numériques de Radio-Canada, the Université du Québec à Montréal and IBM. The prizes will be awarded in five categories to be determined by the partners and announced during the Game Jam.

Several criteria will be assessed in selecting the winners, including originality, artistic value, quality of the user experience and the project’s development and implementation potential.

The grants will help the winning teams continue the development of their prototypes, which will be presented during a public event in the Quartier des Spectacles in May 2018. Professional and financial support will also be provided to the winners. Each partner will determine the type of support it will provide with the aim of optimizing the game prototypes developed during the Game Jam.

Sign up individually or as a team (maximum 6 members) by February 9 at noon. Registration is mandatory and free.

Join us at UQAM’s Cœur des sciences to discuss and explore the infinite possibilities for playable public spaces!

The Quartier des Spectacles Partnership, founded in 2003, is a non-profit organization with more than 60 members active in the district. It is responsible for animating the Quartier des Spectacles by programming cultural activities, managing and animating its public spaces, providing distinctive illumination, and promoting the Quartier as a must-visit cultural destination. The Partnership is supported by the Ville de Montréal and the Secrétariat à la région métropolitaine.

Discussion - The city as playground

Playable City puts games and people at the heart of the city of the future, by using infrastructure and innovative technology to create and generate city-citizen interaction.

Presentation - KaBOOM! The State of Play

Pokemon Go, beyond the buzz

Experience : Through the looking glass I: plot, interactivity and new realities

Experience : Through the looking glass II: immersive and collective experiences