ANNOUNCING THE SEMI-FINALISTS IN THE INTERNATIONAL INTERACTIVE ARCHITECTURAL MAPPING COMPETITION 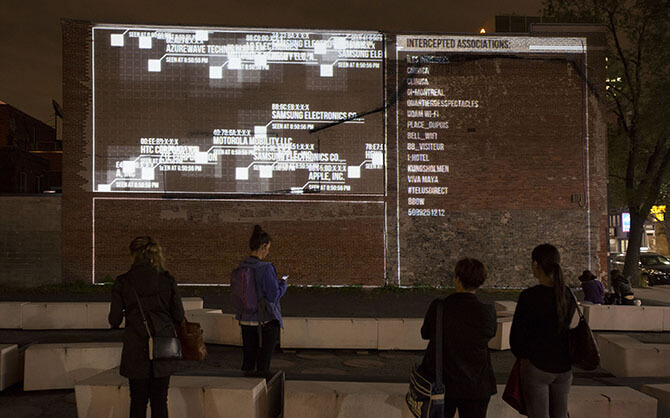 Montreal, March 28, 2018 – Earlier this year, the Quartier des Spectacles Partnership, in collaboration with MUTEK and MAPP_MTL, launched a new worldwide competition for artists and creators in all disciplines to propose interactive architectural mapping works for the building façade outside Saint-Laurent metro station in the Quartier des Spectacles. Now the public is invited to join the jury and the artists on April 11 and 12 at 8:30 p.m., during MUTEK_IMG, for a presentation of prototypes by the competition’s six semi-finalists.

With six building façades permanently dedicated to architectural projections, the Quartier des Spectacles is fertile ground for experimentation and for the exhibition of new types of public art. This competition is designed to support the exploration of innovative practices that encourage public interaction and dialogue. Public participation is a key feature of many projects undertaken by the Partnership, and a signature element of the artworks and installations it presents.

For this international interactive architectural mapping competition, three of Montreal’s leading digital arts organizations – MUTEK, MAPP_MTL and the Partenership – have joined forces for the first time, with the aim of providing high-profile exposure for the artists during the two major events.

Six semi-finalists have been chosen to present a prototype on the wall outside Saint-Laurent metro station. On the evening of April 11, the jury will try the prototypes as the public looks on. On April 12, the public will be able to see and explore the prototypes – a unique opportunity to get a look inside the creative process, while the artists will have the chance to receive direct feedback from the public. The jury will select three finalists, to be announced on April 12 at 5 p.m. during a reception at MUTEK_IMG. The finalists will be asked to further develop their prototype for the final round of the competition in October 2018, during the MAPP_MTL festival. Two $5,000 CAD prizes will be awarded at that time, one chosen by the jury and the other by the public.

On Thursday, April 12 at 3 p.m., the six semi-finalists will present their approach and creative concept during a MUTEK_IMG session at the Phi Centre, providing another public opportunity to learn more about how digital artists work. Free, but reservations are required.

Visit our website for more information about the semi-finalist projects and their creators: quartierdesspectacles.com/concours

The jury for the international architectural mapping competition has five members with in-depth knowledge of public exhibition and innovative practices in the media arts. Visit the biographies of members of the jury here.

THE FUTURE OF DIGITAL IMAGING IN URBAN SPACES

THE FUTURE OF DIGITAL IMAGING IN URBAN SPACES In addition to the competition, there will be a panel discussion on Digital Imagery in Urban Space – the Next Frontier during MUTEK_IMG, presented jointly with the Quartier des Spectacles Partnership and Mapp MTL, on Thursday, April 12 from 3 to 5 p.m. at the Phi Centre. Local and visiting artists, exhibitors and researchers will reflect on the role of digital images in public spaces and the drive to keep developing new techniques. Free, but reservations are required.