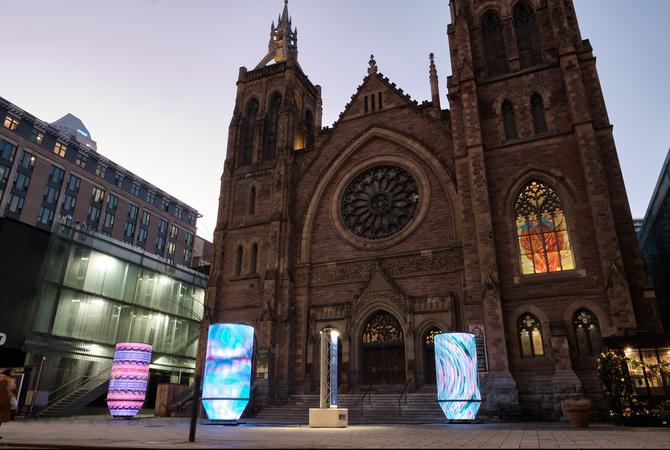 Les Diamants dazzle as they reflect sunlight, and shine brightly when they light up at night. From a distance, Alexis Laurence and Francis Laporte’s elegant interactive artwork, Les Diamants, draws your eye, inviting you to get closer and make the structures turn. Their movement produces a melody along with a kaleidoscopic array of glittering lines and points. Each Diamant has its own distinctive colour and tune. When you get together with other people to make each installation spin, the artwork produces a harmonious waltz in music and light, a thrill for your eyes and ears.

“Les Diamants was born of Alexis’ and my desire to combine our expertise and undertake a joint unifying project during the pandemic. We want to encourage people to get out, come together and reoccupy our public spaces. Our goal is to create a moment of poetry between participants and for the work to bring joy and entertainment to the citizens of the Quebec cities hosting the installation,” said Francis Laporte, Co-Creator, of Perséides studio.

Their musical light show Les Diamants is a humorous interactive installation that will energize public spaces throughout the year with joyful, freewheeling shared experiences.

At the crossroads of art and technology, LEX is a new media studio specialized in the design and production of multimedia environments for stage events, television, unconventional exhibition spaces and large-scale architectural projections.

Bridging creativity and technical experience, we handle projects from conception to integration. We like being flexible in our approach to enhance collaboration between disciplines.

Our goal is to support the artistic path of a project, providing innovative, strategic and creative solutions that bond with the latest technologies.

Francis Laporte was part of the creative vanguard that first blended digital media and video projections with traditional performance arts. His video adaptation of Dominic Champagne’s theatre piece L’Odyssée d’Homère is among his noteworthy collaborations. After producing visuals for televised events such as the opening of the Jeux de la francophonie and the Soirée des prix Jutra, Laporte developed the visual concept for Eros Ramazzotti’s international tour, which he co-directed with Serge Denoncourt.

He was production designer of the Symphonie fantastique de Berlioz, which was performed for the opening of the Disney Concert Hall in Los Angeles.

Having designed the multimedia opening of Dralion for the Cirque du Soleil, Laporte took on Varekai — the first Cirque du Soleil show to feature his original creative vision from beginning to end. That experience motivated him to take his work to new heights with the Cirque’s Beatles show, LOVE, Wintuk and Criss Angel: Believe.

When LOVE was completely redesigned to celebrate its tenth anniversary in Las Vegas, Laporte was asked to contribute a new environment with the latest technology. He was both designer and producer for the large-scale project.

Pieces for the World Day Against the Death Penalty, a homage to Norman McLaren and La Fête de Montréal Among are among the projects Laporte has produced for the Quartier des spectacles. He has also created light shows for renown artists such as Taylor Swift, Frank Ocean, Shakira, Foster The People, Broken Bells, and, recently, Jack White’s international tour.

In 2019, Moment Factory turned to him for the development of new immersive experiences. The following year, David Marin and Rachid Badouri had him design the visuals for their respective shows.

Over the last year, Laporte designed and produced a segment of the OASIS immersion exhibit at the Palais des congrès de Montréal and online educational shorts for Télé-Québec’s On veut des faits !
The interactive public installation Les Diamants was created by Laporte and Alexis Laurence for the Partenariat du Quartier des spectacles. It will be exhibited in Montréal and Québec City until the spring of 2022, at which point it will be available to international buyers.

Recently, Laporte collaborated with François Grisé, founder and director of Un et un font mille, on Alice, a video installation produced for the Ville de Montréal. It was shown in Saint-Laurent, in Parc Beaudet until mid-October. He also developed the video concept for François Grisé’s show, Tout inclus, which was performed at Théâtre Périscope in Québec City and the Duceppe theatre in Montréal this fall before touring Quebec.

Laporte is currently designing the interiors of the production firms Gorditos and Les Enfants.