THE NEW PROJECTION SITE WILL FEATURE "ANAPHORE", AN ORIGINAL WORK 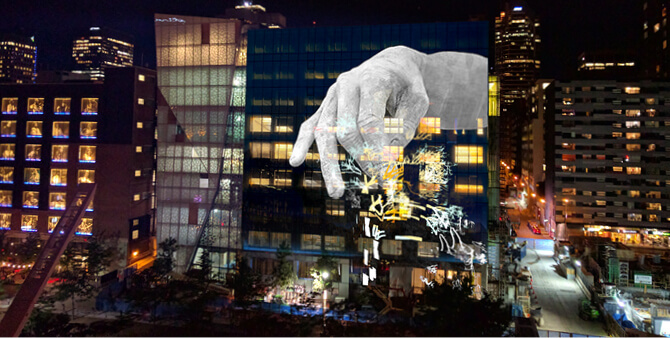 The project chosen is an original work by Ottoblix, a creative studio working in animation, graphic design and interactive media, and also by composer Olivier Girouard and choreographer Jacques Poulin-Denis. Titled Anaphore, the work was chosen by the jury from an impressive group of submissions – 55 groups responded to the call for proposals – by creative people of every stripe, including several choreographers and dancers. Anaphore was selected for its “poetic qualities, refined aesthetic, and diverse representations of the body and dance,” said Pascale Daigle, programming director for the Quartier des Spectacles Partnership.

The work’s title is inspired by the anaphora, a rhetorical device that produces symmetry through the repetition of a word, string of words or series of statements. The collective’s visual choreographies apply the theme of repetition to the characteristic movements of different types of dance.

Anaphore will be projected in September 2017 to coincide with the opening of the first full season for all four partners in the édifice WILDER – Espace danse. The new projection site is unique in that the surface is in portrait orientation and is covered with glass. It overlooks the Place des Festivals, helping make the space an inspiring and iconic gathering place.

The jury for the édifice WILDER – Espace danse projection project was made up of accomplished professionals in several artistic disciplines, including dance, as well as experts in public art.

Founded in 2004, OTTOBLIX has more than a decade of experience with multidisciplinary projects (animation, graphic design, visual effects, video projections, etc.). The company produced the video projections and animations for the Loop installation, presented in the Quartier des Spectacles for Luminothérapie 2016-17.

Mathieu Tremblay has more than 10 years of experience in the creative audio-visual field. Trained in animated film at Concordia University, he is a specialist in visual effects for film and television. In 2011, his animated short D'aléas was nominated for the Jutra (now the Iris Awards) for best animated film, and earned a special mention at the TIFF.

Olivier Girouard reinvents our relationship with the audible realm by working with creators in dance and the visual arts. He is the artistic director at Ekumen, where he produces and promotes sonic works. He has won several awards, including first prize at the Hugh Le Caine Awards (2008) presented by the SOCAN Foundation, and first prize at the JTTP awards (2009). His works have been presented in North America, South America and Europe. He is one of the designers of Loop, the interactive installation presented during Luminothérapie 2016-17.

Jacques Poulin-Denis is an artisan of the performing arts. He is the creator of more than 12 pieces, and his works have been presented in more than 20 cities in Canada, the United States, Europe and Asia. He has been an associated artist of Théâtre La Chapelle since 2012. He was awarded a two-month residency during the Tanz Im August festival in Berlin, and has spent choreographic research periods in Victoria, Vancouver, Bassano and Seoul.