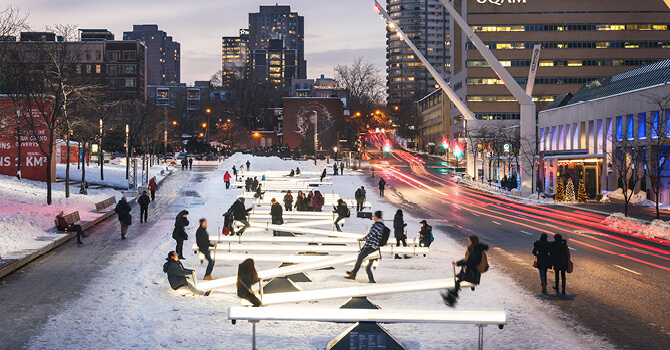 Montreal, November 22, 2017 – The Quartier des Spectacles Partnership is pleased to welcome IMPULSE for a return engagement as part of the 8th edition of Luminothérapie, from November 30, 2017 to January 28, 2018. After touring to a dozen cities around the world, including London, Brussels and Chicago, where it delighted millions of people, the winter installation comprising 30 illuminated, sound-producing seesaws will once again transform the Place des Festivals into a vast illuminated playground.

To bring even more light to our winter evenings, the Partnership invited the Gentilhomme studio to create an original video projection for UQAM’s Pavillon Président-Kennedy, to be shown from November 30 to January 28. Les Lointaines is inspired by our fascination with outer space. It presents a colourful, surrealistic vision of the great unexplored cosmos. The projection is an ode to imagination and technological and artistic innovation – a journey of discovery to new artistic territories.

Montrealers of all ages will be delighted to rediscover this work, which comes to life through public participation. To activate the seesaws, visitors straddle them like any other seesaw. Once in motion, the built-in lights and speakers produce a harmonious sequence of sounds and lights, resulting in a constantly evolving ephemeral composition. Impulse is an urban installation that renews itself for every different audience, creating a dance of sound and light bringing joy and warmth to cold, dark winter days and nights. This participatory installation was originally produced for the 6th edition of Luminothérapie, in 2015-16. It was created by Toronto-based Lateral Office with Montreal-based CS Design and in collaboration with EGP Group, also based in Montreal.

“Montrealers embraced Luminothérapie, the event that invites the public and artists to experience winter in the city differently, while showcasing the Quartier’s public spaces. We are very pleased to be able to present Impulse again. The work has sparked people’s imagination and served as a beacon of Montreal’s expertise and creativity in some of the world’s great cities,” said Pascale Daigle, programming director for the Quartier des Spectacles Partnership.

In another solar system, habitable planets are just waiting to be explored, and soon an expedition will soar into the unknown. Les Lointaines presents a four-chapter poetic narrative based on colourful contemplative tableaux. The public is invited to join in this extraordinary, dreamlike space exploration that draws on our collective fascination with the cosmos and space travel. Creative directors Thibaut Duverneix and Mathieu Léger used a combination of montage, video, 3D renderings and vector animation to create the video projection, whose aesthetic also includes graphic elements reminiscent of Impulse’s white horizontal lines.

The 8th edition of luminothérapie, a winter delight full of colour and light, opens on November 30. come enjoy it with the whole family!

Place des Festivals.
Free and open to all.

Les Lointaines
Pavillon Président-Kennedy, UQAM
Sunday to Wednesday: sunset to 11 p.m.
Thursday to Saturday: sunset to 1 a.m.
Paused December 7 to 10 for a video projection by Communart

Luminothérapie is Quebec’s largest competition for temporary public art installations. Each year, Luminothérapie presents an original, interactive, captivating winter experience in Montreal’s Quartier des Spectacles, with a major installation in the Place des Festivals. Luminothérapie aims to stimulate creativity in urban installations and digital art. Several cities around the world have shown interest in the event, which has become a springboard for international tours of works created in the Quartier.

In the last year, five works created for Luminothérapie and for the Quartier have toured to 20 cities in Canada and abroad. Several cultural districts around the world have expressed interest in these participatory and interactive public art installations by bold local artists who excel in this field.

ABOUT THE QUARTIER DES SPECTACLES and the PARTNERSHIP

ABOUT THE CREATORS OF IMPULSE

Founded in 2003 by Lola Sheppard and Mason White, Lateral Office is a Toronto-based experimental design firm that operates at the intersection of architecture, landscape architecture and urbanism. The studio sees architecture as a response to complex, urgent questions in the built environment, engaging in the wider context and climate of a project – social, ecological or political. The firm’s recent work and research focuses on powerful design relationships between the public realm, infrastructure and the environment.

CS Design was founded in 2008 by Conor Sampson. A wide array of architecture, landscape architecture and engineering firms have hired the firm to design lighting for parks, heritage buildings, monuments and artworks. CS Design’s areas of expertise include electric lighting and programmable control specification, custom fixture design, daylighting in buildings and public spaces, and energy efficiency.

Egli Gallaccio Palanca is a Montreal-based consulting engineering firm. Thomas Egli is a civil engineer and president of Groupe EGP. He has worked on numerous large-scale projects and is a professor of civil engineering at McGill University.

Mitchell Akiyama is a Toronto-based composer, artist and scholar. He has released over ten records on such labels as Raster Noton, Sub Rosa and Alien8, in addition to works on his own imprint, Intr.version Records. He has scored numerous films and dance performances. Akiyama has received commissions from, among others, the Akousma Festivals and the Nouvel Orchestre D’aujourd’hui. He has performed across Europe, Japan, Australia and North America in concert halls, clubs, art galleries, fallout bunkers and festivals including Sonar, Mutek and Send + Receive.

ABOUT THE CREATORS OF LES LOINTAINES

Gentilhomme is a creative studio founded by Thibaut Duverneix. The team includes designers, producers, artists, coders, visual effects artists and musicians. Thanks to its dynamic, interdisciplinary and custom approach, Gentilhomme has expertise in creating, directing and producing interactive films, shows, experiences and installations that capture the imagination and captivate audiences worldwide.

An original creation by Gentilhomme. Produced by the Quartier des Spectacles Partnership.