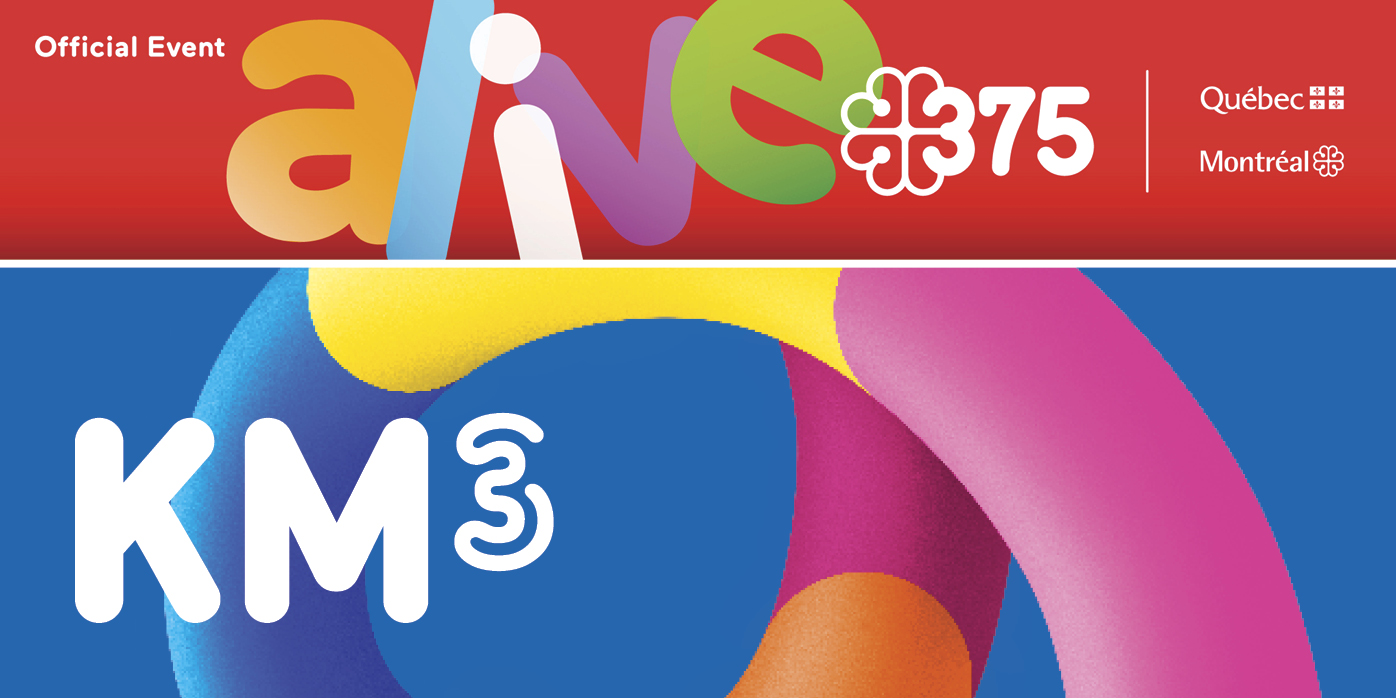 Montréal, Tuesday, August 8, 2017 – The Quartier des Spectacles Partnership invites Montrealers and visitors to enjoy an unprecedented artistic experience from August 30 to October 15 this year: KM3(pronounced kilomètre cube). The event, part of the official programming for the 375th anniversary of Montreal, is a large-scale public art walk created as part of the celebrations. More than 20 original works will be installed throughout the Quartier des Spectacles – on building façades, in squares and parks, on sidewalks and in windows – encouraging people see the city in new ways: surprising, dreamlike, reinvented. A series of festive special events will also take place in the Quartier des Spectacles to complement the art-walk experience.

WORKS with a NEIGHBOURLY THEME

KM3 invites visitors to stroll through the Quartier des Spectacles, including its most iconic spaces and some of its most unusual ones, to see and experience immersive, interactive and contemplative works designed specifically for Montreal. The works will delight the general public, families and art aficionados alike. Curated by Melissa Mongiat and Mouna Andraos of Daily tous les jours, in collaboration with Julie Bélisle of the Musée d’art contemporain de Montréal and Pascale Daigle, director of programming for the Quartier des Spectacles Partnership, the works will, each in their own way, change the way we see the city.

The creators, mainly from Quebec along with several foreign artists, are active in a variety of disciplines, including visual arts, digital arts, video games, interactive design, fashion, dance and architecture. The curators chose the theme of neighbourliness for this first edition of KM3. For and with the public, the artists have dreamed up some new ways for everyone to live together in the city as good neighbours.

WORKS THAT SUGGEST NEW WAYS TO INTERACT WITH THE CITY.

SEEING THE CITY’S SYMBOLS IN A NEW LIGHT.

WORKS THAT HELP US THE URBAN LANDSCAPE DIFFERENTLY.

LUMINOUS WORKS THAT COME TO LIFE AFTER DARK.

Complementing the art walk, a compelling series of festive events will energize the Quartier des Spectacles during KM3

Official opening of KM3
August 30, starting at 5 p.m.
Place des Festivals
With the artists in attendance
Free event, open to the public

Attend the official unveiling of the KM3 art walk, with the artists and numerous dignitaries in attendance. There will be entertainment throughout the evening, guided tours of the art walk, DJs and a few surprises. Don’t miss it!

To celebrate the opening of KM3, Nicolas Fonseca and Judith Portier will host an over-the-top neighbourhood banquet crafted from Montrealers’ most treasured culinary memories. Inspired by the surrealist cadavre exquis game, a poetic pantry will give the public the chance to create menus in their own image, while chefs will improvise delicious creations on the spot.
To take part in this unique culinary experience, reserve your seat at the banquet today!
Space is limited. Reservation: km3artpublic.com

By itself, a 300-cyclist night ride is an extraordinary event. It becomes something magical when each rider’s pedalling contributes to a collective artwork. Enthusiasts of all ages are invited to come to a poetic defence of urban cycling. Thanks to an Agit POV unit attached to their bike’s spokes, each participant will display a word of their choice. Later, Queen Ka will rap the evening to a close.

Based on an artwork by: Alexandre Castonguay
Space is limited. Reservations: km3artpublic.com

A gigantic contemporary line dance will celebrate Montreal’s 375th anniversary in the Place des Festivals. Conceived by the renowned choreographer Sylvain Émard, this project features 375 amateur dancers who will plunge body and soul into this huge dance extravaganza. After the evening performances, a huge dance party will take over Place des Festivals. A co-presentation of Sylvain Émard Danse and Festival TransAmériques.

With its tents, trailers, carousel and shooting gallery, HUMANORIUM resembles 19th and 20th century carnivals… only this one’s attractions were created by contemporary artists: a grocery-cart carousel, cabinets of curiosities packed with assorted sculptures, photographs and soundscapes.

Artists’biographies are available here. (in French only).

MAKE THE MOST OF YOUR VISIT

Creative workshops for Kirds
Workshops inspired by the works of KM3 are available for young people (age 5 to 13). Most workshops are presented in collaboration with Chromatic.
Information and reservations: km3artpublic.com

KM3 (kilomètre cube) opens new perspectives on the city through today’s most innovative public art. From the Quartier des Spectacles’ iconic squares to some of its most unusual places, this art walk features more than 20 immersive, participatory and contemplative public artworks that renew our vision of the urban fabric and the people we share it with. KM3 is an initiative of the Quartier des Spectacles Partnership and is one of the government of Quebec’s gifts to Montreal on the occasion of its 375th anniversary. The event is made possible by the financial support of, among others, the government of Quebec and the Ville de Montréal within the framework of the Entente sur le développement culturel de Montréal.

For more information about the government of Quebec’s contribution to the celebration of Montreal’s 375th anniversary, click here.