Les Jardins Gamelin: Returning from May 12 to October 2 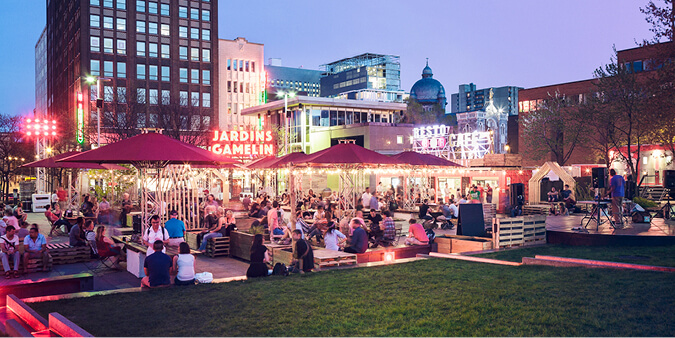 Montreal, April 12, 2016 – Les Jardins Gamelin, the spring-summer incarnation of Place Émilie-Gamelin that charmed Montrealers and tourists last year, returns to the Quartier des Spectacles on May 12. To launch the new season and unveil the program of activities running until October 2, the media and the public are invited to the grand opening on May 12 at 5:30 p.m. The party will also serve as the official kick-off to the spring-summer season in the Quartier des Spectacles.

This major redesign of Place Émilie-Gamelin is once again made possible by the support of the Ville de Montréal and the borough of Ville-Marie, the participation of community and neighbourhood groups including UQAM, BUSAC Immobilier (owner of Place Dupuis) and Warner, and the contributions of cultural partners who demonstrated a deep commitment to the project throughout the 2015 season.

“Last year’s experience was extremely positive in every way. We breathed new life into a neglected area, thanks to a high-quality design and programming and to the enthusiastic participation of everyone involved, including the existing users of Place Émilie-Gamelin. Les Jardins Gamelin is a model project for the reclamation of urban space, and we are proud to invite Montrealers back for another season,” said Jacques Primeau, chair of the Quartier des Spectacles Partnership’s board of directors.

In 2015, Les Jardins Gamelin hosted more than 230 free activities for Montrealers, including numerous events and festivals such as MONTRÉAL COMPLÈTEMENT CIRQUE, and Piknic Électronik – which attracted more than 15,000 people over three days. With its unique look, floating sculpture, video projections on Place Dupuis, illuminated sculpture by Melvin Charney and inviting patio, the space quickly became a favourite spot for many Montrealers.

INVITATION TO THE GRAND OPENING OF LES JARDINS GAMELIN

The evening will be a festive one thanks to the participation of many of the partners who will enlive Les Jardins Gamelin this spring and summer, including activities presented by the OFFTA and MONTRÉAL COMPLÈTEMENT CIRQUE festivals as well as Piknic Électronik with DJs Ponsolo & Ledisko. Closing out the evening on a musical note, the duo Milk & Bone (Camille Poliquin and Laurence Lafond-Beaulne) will play their entrancing electro-pop on the Jardins Gamelin stage. Sentier urbain will also be present to inform the public about the urban agriculture installations in the space, which will evolve over the course of the season, while La Vitrine will present the spring-summer program for the entire Quartier des Spectacles. Finally, the Jardins Gamelin snack bar will be launched, serving refreshments and light meals.

Les Jardins Gamelin will once again host a rich and varied roster of cultural and citizen-driven activities, every day and night of the week. Thanks to a warm and welcoming design by Pépinière & co, including an outdoor restaurant, Les Jardins Gamelin will once again be a great destination for al fresco lunches, extended after-work get-togethers and lively weekends for the whole family. Urban agriculture will once again be a key feature of this redesign of Place Émilie-Gamelin. Sentier urbain will be responsible for the gardens, vegetable plots and other greenery that will enliven the space for the season.

1.26 by Janet Echelman, a monumental suspended sculpture, will once again add a poetic touch to Les Jardins Gamelin. The colourful net, illuminated at night, will float in the Montreal sky until the early autumn. Several different architectural video projections will take turns illuminating the side of Place Dupuis, starting with the colourful 9 x [MTL] by Gabriel Poirier-Galarneau and Vincent Bilodeau, featuring iconic Montreal scenes.

This year, food and beverage service in Les Jardins Gamelin will be operated by Dominic St-Laurent and his team, of BallPark restaurant. The snack bar will serve breakfast as well as light afternoon and evening meals. The vegetable gardens of Les Jardins Gamelin will provide some of the produce used and provide inspiration for menus throughout the season. The full menu will be unveiled on May 12.

Place Émilie-Gamelin closed from April 18 to May 12

The reorganization of the site will begin on April 18. In order to carry out the work safely and efficiently, Place Émilie-Gamelin will be closed to the public until May 12. Only the northern section of the space, where meals are distributed to homeless people, will remain open throughout the setup period. Place Émilie-Gamelin is bordered by De Maisonneuve Blvd. and Saint-Hubert, Sainte-Catherine and Berri streets.

In the spring of 2015, Place Émilie-Gamelin revealed a new look to Quartier des Spectacles residents and visitors in the form of Les Jardins Gamelin, in place from May to October. A large, welcoming, green space in the heart of downtown, Les Jardins Gamelin is an original temporary setup comprising several multifunctional facilities. Seven days a week, day and evening, the space hosts exciting cultural and citizen-oriented activities for every taste. The initiative, led by the Quartier des Spectacles Partnership, was created in collaboration with Pépinière & co. It also benefits from the contributions of numerous partners and the support of the borough of Ville-Marie. This first large-scale project encouraged many Montrealers to re-adopt the central space; it is also aimed at making Place Émilie-Gamelin one of the city’s signature tourist attractions.

The Quartier des Spectacles is Montreal’s cultural heart, boasting North America’s most concentrated and diverse group of cultural venues. The district is the year-round host to countless festivals and events, many of which include free outdoor shows and activities. The Quartier also hosts innovative urban installations involving cutting-edge lighting design, immersive environments or interactive digital spaces. It also presents artistic video projections on several building façades, year round. The Quartier des Spectacles is an international showcase for new multimedia technology, making Montreal a global leader in the urban exhibition of digital content. www.quartierdesspectacles.com