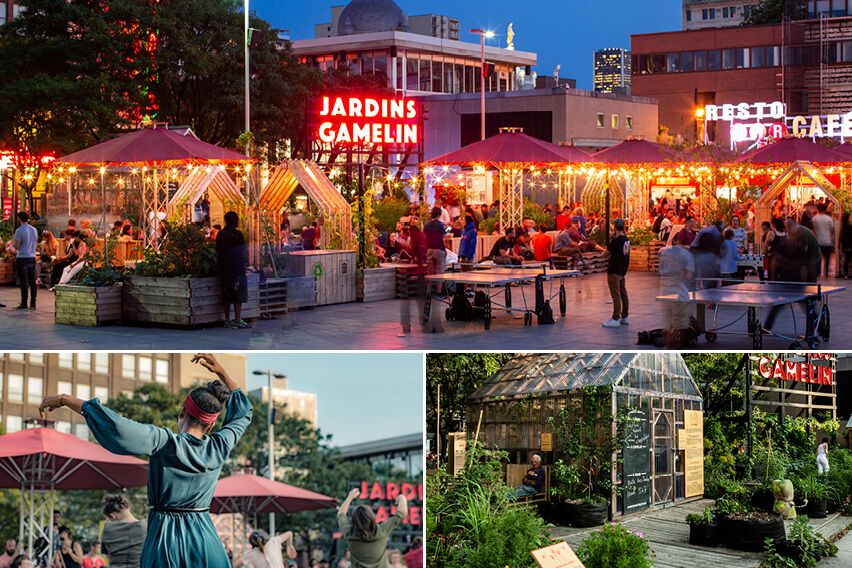 Montreal, September 6, 2018 – Until September 30, Les Jardins Gamelin will feature a host of free activities for families and all Montrealers. At lunchtime and every evening starting at 5 p.m., students and workers will be thrilled to continue enjoying the large, green patio and listening to an eclectic mix of live music and DJs every day from Wednesday to Saturday. As summer enters its final glorious days, come to Les Jardins Gamelin and enjoy the festive atmosphere, harvest time in the gardens, and evenings and weekends of dancing and fun!

Festival season is still going strong, with dance, virtual works, music and literature all taking the spotlight in Les Jardins. Four events will present an activity or a portion of their outdoor programming in the park – a great way to experience some of the festivals going on in the Quartier des Spectacles. Don’t miss the children’s activities presented by the FNC and FIL.

For its 16th edition, Quartiers Danses invites you to discover the talent of our local choreographers. Come out and marvel at the many facets of contemporary dance.

A virtual reality workshop will introduce kids ages 10 to 15 to this new tool, including a sampling of virtual reality experiences. Children of all ages (5 and up) can explore similar themes with a more playful workshop.

For the third year in a row, the FIL will make Les Jardins Gamelin its home base, including the FIL’s self-serve library for all ages. Cultural outreach workers from the Exeko organization will also be on-site, serving as both librarians and guides but especially to run group activities related to books, reading and writing. La Bibliothèque du FIL, September 21 to 30, daily from 11:30 a.m. to 6 p.m.

The afternoon of Saturday, September 22 will be dedicated to youth literature. From noon to 1:30 p.m., as part of the Les mots parleurs activity, presented in collaboration with Maison Théâtre, children aged 6-12 can participate in several fun activities, including interactive readings presented in collaboration with Communication-jeunesse and the Prix jeunesse des libraires du Québec. If you’re ready for even more, start the day with Les Mots parleurs at Maison Théâtre, including workshops with professional authors and, in the afternoon, attend a public reading of writings by children, read by actors. Free and open to all.

Then, at 4 p.m., Catalan writer Ramon Erra will be accompanied by a member of the band Muchacho y los Sobrinos and Québécois writer Michel Vézina for a reading (in French and Catalan) of his novel Far West Gitano. The day before, September 21 from 5 to 6.30 p.m., Muchacho y los Sobrinos will play a set of their original Catalan rumba tunes.

Pop fans rejoice this vibrant festival will participate in some of Les Jardins Gamelin’s concert series. Come hear some very talented artists at noon and 7 p.m.

Each Sunday in September from 11 a.m. to noon, Sentier Urbain will host workshops to inspire you and make your gardening adventures even more enjoyable:

Every Tuesday from 5 to 7 p.m., Sentier Urbain will also present a series of informative free talks:

Workshops and talks are in French.

Workers and students will enjoy tuneful lunches with several concert series, including Midis Pop. Then from 5 to 7 p.m., Les Jardins Gamelin will mirror Montreal’s diversity with an eclectic series featuring everything from world music to pop to hip-hop.

Every Friday, this new-talent series presents the winners of music competitions and awards in every genre. Students will want to mark their calendars for the evening of September 14, when CHOQ.ca and UQAM will present a series of shows by UQAM alumni.

September is also the last chance for families to enjoy the Maison jaune, Sundays until September 16, and to attend creative workshops, performances, concerts, storytelling and workshops as part of the matinées familiales avec Petits bonheurs. The facilitators will also make games and craft supplies available from Wednesday to Sunday.

Infants and toddlers (0-5 years) can also spend time in Le chalet ambulant du gros A, the tent that’s all about exploration and reading.

On Sunday afternoons, come to the Jardins with family and friends for the Randolph gaming club, then stick around to compete against dozens of other teams at trivia night!

MOVE AND DANCE, AGAIN AND AGAIN!

From yoga in the morning to Salsafolie in the evening, to meditation sessions to start your day off right, visitors to Les Jardins Gamelin will find plenty of ways to enjoy the outdoors in the city. Each Wednesday in September, put on your dancing shoes for the last dances of the summer: Kompa (Sept. 12), Bachata (Sept. 19) and Rockabilly Jive (Sept. 26). The Salsafolie season finale on September 29 will have you dancing to salsa, bachata, merengue and reggaeton.

LES JARDINS GAMELIN
Open to 11 p.m. daily until September 30. All activities are free. For complete program details, subscribe to the weekly Jardins Gamelin newsletter (in French only) and follow us on Facebook.

BAR AND SNACK BAR
Dominic St-Laurent and his team present an exclusive menu inspired by Quebec’s fast-food classics, including happy hour specials (5 to 7 p.m.) and a children’s menu. Restaurant and bar service open seven days a week until September 30: Monday to Friday from 11 to 11, Saturdays and Sundays from 9 a.m. to 11 p.m.