THIS YEAR, MONTREALERS OF ALL AGES MADE LES JARDINS GAMELIN THEIR OWN!

THANKS TO A VARIED PROGRAM, THE SPACE ATTRACTED LARGE, DIVERSE CROWDS 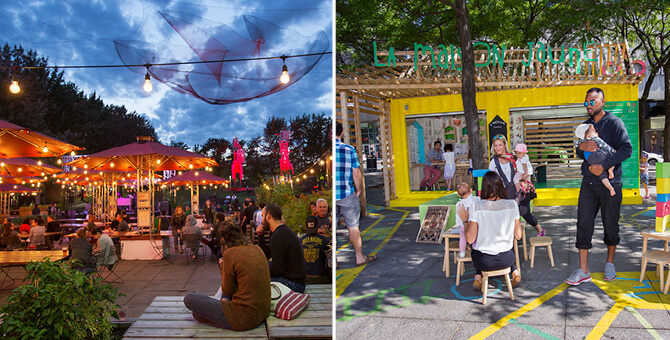 Montreal, October 24, 2017 – Les Jardins Gamelin, the seasonal makeover and activities program for Place Émilie-Gamelin, once again met its revitalization and usage goals by creating a safe, inclusive and unifying place. Whether among friends or with their families, thousands of people enjoyed the Jardins’ many attractions over 154 consecutive days of programming. Starting in May 2018, Montrealers will be treated to another season of the inviting, festive atmosphere found in Les Jardins Gamelin!

A PLACE FOR EVERYONE

This year marked the arrival of Les Jardins Gamelin as a complete family destination. This significant goal, set by the Quartier des Spectacles Partnership, which leads the Jardins Gamelin project, was achieved thanks largely to the Petits Bonheurs organization. Every Sunday, the Matinées familiales avec Petits bonheurs delighted families with performances, storytelling and art appreciation workshops designed by professional artists. One of this year’s major new features was the Maison jaune created by Castor et Pollux. This special space for kids was focused on casual fun and games among friends, and hosted several creative workshops. “In Les Jardins Gamelin, we have a good place to focus on nature, creativity, art and culture – it is now a place for small children and their parents. It was a real pleasure to present our fresh, original program designed for families,” said Marion Delpierre, artistic director for Petits bonheurs.

“The success of Les Jardins Gamelin demonstrates, once again, the importance of building strong, lasting partnerships when we want to make a positive contribution to residents’ quality of life. I wholeheartedly applaud the new family-oriented programming. Thanks to everyone involved for your commitment to this community project, which has successfully turned the space into a welcoming, safe place for all,” said Montreal mayor Denis Coderre.

“Place Émilie-Gamelin is so vital today because of the contributions of many local organizations and individuals, including Sentier Urbain, the police, social workers, the borough of Ville-Marie and the Jardins Gamelin staff,” said Jacques Primeau, chair of the Quartier des Spectacles Partnership’s board of directors. “Thanks to the Jardins’ rich and diverse artistic programming, we attracted many different audiences and transformed the space into a lively, inviting gathering place. The project also helped us offer more cultural activities in the eastern portion of the Quartier des Spectacles.”

MORE THAN 775 HOURS OF PROGRAMMING AND 659 ARTISTS

All season, culture and the arts were front and centre in Les Jardins Gamelin, with some 320 free activities. “The program of cultural and social activities is essential to our effort, now in its third year, to encourage residents to return to Place Émilie-Gamelin. Our programming is what sparks interest in Les Jardins Gamelin, and it brings together an exciting mix of people. We want to extend our most sincere thanks to all the partners and artists who made the program possible; they are helping make this downtown space a vital and inclusive place,” said Pascale Daigle, director of programming for the Quartier des Spectacles Partnership.

Music was a key part of the program, with Les escales musicales, Friday concerts and Discovery concerts, DJ sets and the ever-popular karaoke. Salsafolie on Saturdays and the Summer Balls appealed to folks who love dancing and, of course, salsa! “Working with the Quartier des Spectacles, we have built a hub for outdoor dancing, with a festive atmosphere and a gorgeous setting,” said Salsafolie director Annie Joubert. “For 13 evenings from May to September, we brought together Montrealers from every walk of life and got the city to dance!”

There were also plenty of movies, with Notre cinéma d’ici aux Jardins, featuring Quebec-made films screened in collaboration with Radio-Canada. The joys of play were enhanced by the team of facilitators from Randolph, who organized fun activities for the Jardins’ various audiences with a games club, trivia night and the Aviateur ride/game designed by Randolph’s specialists.

ESSENTIAL PARTNERS ATTRACTED ALL AUDIENCES TO THE JARDINS

For the first time since MONTRÉAL COMPLÈTEMENT CIRQUE started using Place Émilie-Gamelin eight years ago, the festival’s artists spent the entire month of July in Les Jardins Gamelin, wowing the city with its reinvented circus arts. “The ROUGE show attracted record crowds and included many breathtaking moments,” said Nadine Marchand, director of MONTRÉAL COMPLÈTEMENT CIRQUE. “And, working with the Partnership this season, we presented circus performances and workshops that got more people actively involved.” Those special activities included À nous la rue, an event produced for Montreal’s 375th that brought some extra beauty to the Jardins.

Meanwhile, Bibliothèque et Archives nationales du Québec (BAnQ) displayed the richness and diversity of its collections while putting its expert librarians and archivists at the public’s disposal. “By looking at a variety of literary works and reproductions from our special collections and archives, people of every background learned about the history of Place Émilie-Gamelin. It was a great success, and we all learned something interesting,” said Marie-Pierre Gadoua, the BAnQ’s project manager.

Lastly, in the visual arts, a new work by Ilana Pichon, presented in collaboration with MU, now decorates the entrances on Sainte-Catherine Street. There was also another season to admire 1.26, the iconic hanging sculpture by Janet Echelman, as well as the illuminated work Skyscraper, Waterfall, Brooks – A Construction by Melvin Charney.

Thousands of regular and occasional visitors enjoyed the snack bar, bar and ice cream stand in Les Jardins Gamelin, featuring modern snacks with a Montreal touch, prepared by Dominic Saint-Laurent and his team from Ballpark restaurant. After-work drinks on the large patio, covered by an illuminated awning, were a big hit again this year. Lastly, weekend Mexican-inspired brunches on the lawn were another popular activity.

Urban agriculture was a centrepiece of the Jardins’ five-month run, under the leadership of Sentier Urbain, a social ecology organization that took charge of greening and beautifying the space. There were seven thematic gardens and more than 60 planters surrounding the patio, with 75 plant species in more than 148 varieties throughout the site. The organization also gave workshops and presentations and led guided tours of the gardens.

“The 2017 version of Les Jardins Gamelin was all about giving and sharing, with nearly one tonne of vegetables grown on-site and distributed to the public for free,” said Guillaume Moreau, project manager for Sentier Urbain. “The Jardins are also about discovery and innovation. They are a window on the possibilities for tomorrow’s environment and approach to agriculture.” Sentier Urbain’s work was enormously successful, with a bountiful harvest from the more than 2000 edible plants grown this year.

In the spring of 2015, Place Émilie-Gamelin showed a new face to Quartier des Spectacles residents and visitors with Les Jardins Gamelin, open from May to October. A large, green and inviting civic space in the heart of downtown, Les Jardins Gamelin return every year with an original temporary layout and a versatile set of facilities. The space’s unique, accessible and human-scale programming has become a part of daily life for residents and visitors, making Les Jardins Gamelin an inclusive gathering place in true Montreal style. The initiative, led by the Quartier des Spectacles Partnership, is produced in collaboration with Pépinière & co, Sentier Urbain and numerous partners, with the financial support of the borough of Ville-Marie.

The Quartier des Spectacles is Montreal’s cultural heart, boasting North America’s most concentrated and diverse group of cultural venues. The district is the year-round host to countless festivals and events, many of which include free outdoor shows and activities. The Quartier hosts innovative urban installations involving cutting-edge lighting design, immersive environments or interactive digital spaces. Year round, the Quartier presents artistic video projections on several building façades. The Quartier des Spectacles is a showcase for new multimedia technology, making Montreal a global leader in the urban exhibition of digital content. For more information, visit quartierdesspectacles.com.