Montreal, May 5, 2015 – After a month of intense preparation, Place Émilie-Gamelin is finally ready to show off its new look: Les Jardins Gamelin. The Quartier des Spectacles Partnership invites Montrealers and visitors to come out and discover the new arrangement designed by Pépinière & co at a free inaugural celebration open to all, on Thursday, May 7 from 5:30 to 11 p.m. The event will feature art, music, dance, games and activities, setting the tone for the months to come.

Two works will also be unveiled with the artists in attendance: 1.26, an immense illuminated net by Janet Echelman, which will hang over the site, and 9 x [MTL], architectural video projections showcasing Montreal that will light up nine building façades in the Quartier des Spectacles, including Place Dupuis.

The event also marks the launch of the spring-summer season in the Quartier des Spectacles, where more than 20 festivals will take place between now and mid-September. In addition to the festivals, Sainte-Catherine Street between Bleury and Clark streets will be a pedestrian zone starting May 7, the 21 Balançoires (swings) will return to the Promenade des Artistes and many events will be held in the area’s cultural venues. Once again, the Quartier will deliver on its promise of offering the most emotions in a square kilometre!

For sale at the counter in Les Jardins Gamelin: small dishes created by chef Marc-André Lavergne (Nomade So6 and formerly of Accords restaurant) as well as beer and other refreshments.

The evening, hosted by Catherine Pogonat, will feature DJ Dan Yul, presented by Fierté Montréal Pride, who will work the turntables while guests arrive. The largest LGBT gathering in the French-speaking world will return to Place Émilie-Gamelin between August 10 and 16.

The Montréal Country Festival will follow with a line-dancing lesson. Country music will return to the site from August 21 to 23, with the first edition of the festival to be held in Place Émilie-Gamelin. 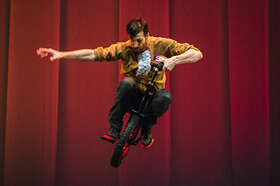 Next, Émile Mathieu, Quebec’s unicycle champion, will give a breathtaking demonstration of his talent! Fans of the circus arts will want to return to Les Jardins Gamelin from July 2 to 12 to discover the latest production by Montréal complètement cirque. 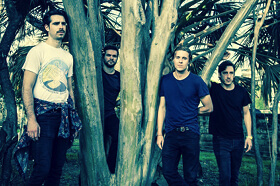 The Franklin Electric will then take to the stage for a set of orchestral pop in a similar vein to fellow Montrealers Arcade Fire and Beirut. Audience members will get a sneak preview of their outdoor concert on June 27 at the Festival international de Jazz de Montréal. 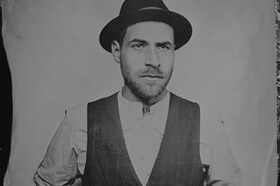 To close the evening, Piknic électronik will transform the site into a dance floor with DJ Speakeasy Electro Swing. The electronic music festival will return to Les Jardins Gamelin four more times this summer. 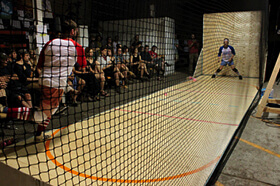 Throughout this colourful, festive evening, creator Gabriel Plante and the OFFTA invite the public to play Plyball, an unusual game involving two players and a referee. Plyball matches will return to Les Jardins Gamelin – along with many more attractions – during the three weekends of the OFFTA, from May 14 to 31. Plus, Sentier Urbain, the urban agriculture coordinator for the Jardins, will present its approach and its upcoming activities. Two representatives from La Vitrine will also be on hand to provide information about the packed spring-summer program in the Quartier des Spectacles, running from now through September.

The new facilities include repurposed shipping containers equipped to provide food and beverage services, a large patio with a luminous canopy, a stage, and spaces dedicated to urban agriculture and a local produce market (at the end of the summer).

This soon-to-be green space (the seeds have been planted!) will host cultural and citizen-driven programming, and it will be the perfect downtown space for outdoor lunches and extended happy hours. In the evening, the Jardins will have a luminous atmosphere in the Quartier’s inimitable style, featuring the existing sculpture by Melvin Charney, illuminated since last year, as well as 1.26 and the video projection on Place Dupuis.

Place Émilie-Gamelin was inaugurated on the occasion of Montreal’s 350th anniversary. Bounded by Berri, Saint-Hubert and Sainte-Catherine streets and De Maisonneuve Boulevard, it is one of six public spaces managed by the Quartier des Spectacles Partnership. Since 2010, the Partnership has been beautifying the space and presenting activities designed to attract more visitors.

Les Jardins Gamelin is an initiative of unprecedented scope for the site. It was produced with numerous partners and the support of the Borough of Ville-Marie. It is intended to encourage all Montrealers to make greater use of this centrally located public space, and to make it one of the city’s tourist attractions.

The Partnership is a non-profit organization with some 60 members active in the Quartier des Spectacles. Its board of directors includes representatives from culture, education, business, municipal government and local residents. Its permanent staff helps animate the Quartier des Spectacles by presenting cultural activities designed to complement the programming presented by the Quartier’s 80 venues and 40 festivals. The Partnership also manages the district’s public spaces and specialized equipment, illumination program and destination promotion.

Pépinière & co. is a non-profit organization whose mission is to promote, inspire and showcase creativity through urban projects – whether one-off, temporary or permanent – that encourage community involvement. Through its work, the organization seeks to bring more spontaneity to urban space by making creativity part of everyday life. Its achievements include the Village Éphémère 2014, in collaboration with the Association du design urbain du Québec, the Hivernale 2015 at the Olympic Park, and the Marché des ruelles.

Please note that the complete list of activities of Les Jardins Gamelin will be sent on Thursday, May 7.