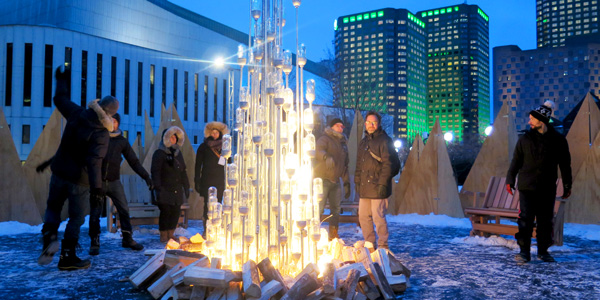 Montreal, February 17, 2016 – From February 18 to March 5, MONTRÉAL EN LUMIÈRE festivalgoers can add an interactive, musical and luminous experience to their visit to the Quartier des Spectacles. Everyone is invited to the Promenade des Artistes to gather around Îlot de chaleur (“Island of Warmth”), an urban campfire consisting of 220 light bulbs that come to life, light up and change based on the movements of the people gathered around it.

Presented as part of MONTRÉAL EN LUMIÈRE and produced by the Quartier des Spectacles Partnership and Illuminart, this interactive installation was conceived and designed by ATOMIC3. “We wanted to highlight Montreal’s festive and inclusive tradition by building a ‘fire’ downtown using lights that provide warmth and bring people together”, explains Louis-Xavier Gagnon-Lebrun of ATOMIC3.

Montrealers and festivalgoers are invited to have a seat in one of the eight double rocking chairs placed around the campfire. To stoke the urban fire, comprised of 220 incandescent bulbs, motion sensors were installed on and under the chairs surrounding the installation. The rocking of the chairs acts as a virtual bellows blowing on the fire. And when people dance and jump near the fire, sparks fly up to the tip of the flames, at the very top of the 6-metre structure. It’s quite a show!

When people rock their chairs and dance around the luminous structure together, Îlot de chaleur lights up and crackles, becoming a visual and auditory symphony. Festivalgoers influence the intensity of the flames, which rise, flicker and swirl in response to people’s movements. They create heat, smoke and light, and produce the comforting sound of a crackling fire.

Be among the first to warm yourself by the fire of lights!

February 18, 7:30 p.m. at the Promenade des Artistes, corner of De Maisonneuve and Jeanne-Mance 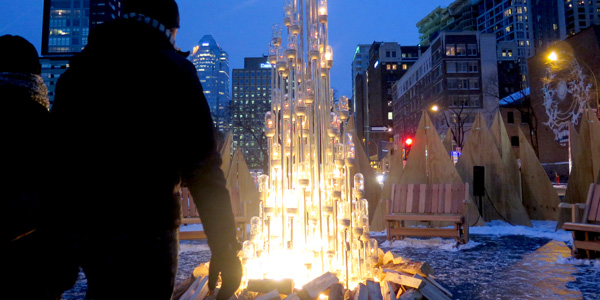 A coproduction of Quartier des spectacles Partnership and Illuminart, during MONTRÉAL EN LUMIÈRE.

Atomic3 is a creative studio active in the performing arts, lighting and multimedia technology. The company designs and produces interactive or contemplative urban installations that transform public spaces and encourage people to see their surroundings in new ways. The founders’ deep and diverse stagecraft experience gives their creations original narrative and poetic dimensions.

For the Quartier des Spectacles, Atomic3 has also created the interactive Luminothérapie installations Éclats de verre, presented in Parc Émilie-Gamelin in 2011, and Iceberg, for the Place des Festivals (2012). In collaboration with 20k, the firm conceived and created Maëstro, an interactive installation that allowed the public to control the spouts of the Place des Festivals fountain. www.atomic3.ca

In 2017, Illuminart—a new free event solidifying Montreal’s position as a “Smart and Digital City”—will establish itself as an annual international crossroads for illuminated, interactive and immersive avant-garde creativity. Its array of technological works will further confirm the status of MONTRÉAL EN LUMIÈRE as a creative laboratory and showcase, part of an international circuit of events dedicated to the theme of light! Illuminart is one of the 181 projects selected as part of the Montreal initiative Je fais MTL. It all begins in 2017… but this year we’ll enjoy an avant-premiere with the Îlot de chaleur (Island of Warmth). montrealenlumiere.com

The Quartier des Spectacles is Montreal’s cultural heart, boasting North America’s most concentrated and diverse group of cultural venues. The district is the year-round host to countless festivals and events, many of which include free outdoor shows and activities.

Available by FTP (do not use Google Chrome): ftp://remote.quartierdesspectacles.com
User: medias • Password: medias