Urban Agriculture Is Alive And Well In Les Jardins Gamelin 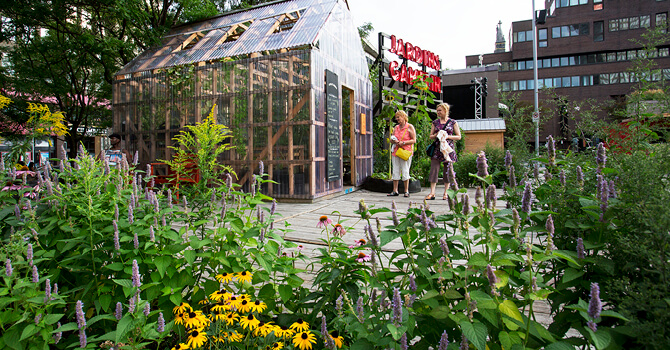 Montreal, July 25, 2017 – Now in its third year, Les Jardins Gamelin continue to attract large numbers of Montrealers and visitors who enjoy the Jardins’ unique design and daily program of cultural and citizen-oriented activities. Place Émilie-Gamelin’s renewed energy also owes much to the coordinated work of a number of partners, including Sentier Urbain. For the last three years, the social ecology organization has led a successful urban agriculture initiative in the Jardins.

URBAN AGRICULTURE FOR THE GREATER GOOD

Urban agriculture is an important part of the Jardins Gamelin concept. After being approached by La Pépinière, an organization working to revitalize under-used urban sites and an original partner in the Jardins Gamelin initiative, Sentier Urbain worked with the Quartier des Spectacles Partnership to develop an urban agriculture program that would also address challenges related to citizen participation and peaceful coexistence with marginalized groups.

That’s how Sentier Urbain came to design a large participatory garden in the heart of the city. The organization developed an original approach to making urban agriculture accessible to all, with the aim of making this type of gardening a unifying and inclusive social activity.

The educational component is a key part of the greening program for the Jardins. In 2016 alone, Sentier Urbain reached nearly 500 people with more than 20 guided tours of the garden plots, presentations, and more than 15 urban agriculture workshops, all free of charge.

Sentier Urbain is driven by a desire to make urban agriculture more accessible, and welcomes residents who want to help in the gardens, including harvesting the ripe produce. Items grown in the Jardins are also featured on the menu at the weekly coffee gatherings organized by Présence Compassion, a social assistance organization that works with homeless people to help them reintegrate into society and improve their living conditions.

Sentier Urbain has also worked with Présence Compassion on a pre-employment project for homeless people. Participants in the program, launched two years ago, work in the gardens and help beautify their surroundings. They are paid for their work and earn a certificate attesting to their participation in the summer-long program.

“Through our work on greening the gardens, raising awareness, educating the public, and social mobilization and belonging, we are transmitting skills that participants then pass on to their community. Our work has ripple effects far beyond Les Jardins Gamelin, contributing to the quality of life and well-being of the public,” said Sentier Urbain’s Guillaume Moreau, project manager for the gardens in Les Jardins Gamelin.

“Les Jardins Gamelin are more than a downtown green space. They also include a social and community element that sparks people’s curiosity, encourages participation and inspires civic pride. Les Jardins Gamelin have become, for everyone regardless of social standing, a living space in the heart of the neighbourhood where people enjoy spending time,” said Pascale Daigle, director of programming for the Quartier des Spectacles Partnership.

“I enjoy human contact, and the people I meet here accept me as I am. Participating in the project reduces my isolation and helps me develop discipline that I can apply to other aspects of my life,” said a participant in the pre-employment project. Sentier Urbain recently won the Novae award for community relations and living spaces, for its management and design of the dedicated garden and urban agriculture spaces in Les Jardins Gamelin.

This year there are seven theme gardens in Les Jardins Gamelin, along with nearly 60 planters surrounding the patio and on the perimeter of Place Émilie-Gamelin.

In addition, mushrooms are being grown in several of the gardens. The planters next to the patio and on the Place Émilie-Gamelin perimeter contain many types of edible and aromatic plants, including both herbs and vegetables.

Garden exploration – every Tuesday from 5 to 7 p.m. (in French)

Participants learn about methods for growing various plants, as well as their medicinal and culinary properties. The activity includes a tour of the gardens with a Sentier Urbain facilitator, followed by a presentation on several topics related to urban agriculture.

Workshops on various practical topics – every Sunday from 11 a.m. to noon (in French)

Sentier Urbain is a non-profit organization whose mission is to foster greener communities. Sentier Urbain takes a unique structured approach focused on awareness, education and action; the integration and coordination of different stakeholders; original, creative solutions adapted to the community’s needs; the inclusion of marginalized individuals; an ecosystemic approach to greening; and ownership and accountability through coordinated action.

AIn the spring of 2015, Place Émilie-Gamelin showed a new face to Quartier des Spectacles residents and visitors with Les Jardins Gamelin, open from May to October. A large, green and inviting civic space in the heart of downtown, Les Jardins Gamelin return every year with an original temporary layout and a versatile set of facilities. The space’s unique, accessible and human-scale programming has become a part of daily life for residents and visitors, making Les Jardins Gamelin an inclusive gathering place in true Montreal style. The initiative, led by the Quartier des Spectacles Partnership, is produced in collaboration with Pépinière & co, Sentier Urbain and numerous partners, with the financial support of the borough of Ville-Marie.

The Quartier des Spectacles Partnership is a non-profit organization with more than 70 members active in the district. It is responsible for managing and animating public spaces in the Quartier des Spectacles, providing distinctive illumination, and promoting the Quartier as a must-visit cultural destination. The Partnership is a member of several international networks, including the Connecting Cities Network and the Global Cultural Districts Network.

Les Jardins Gamelin are open daily until 11 p.m.
All activities are free.