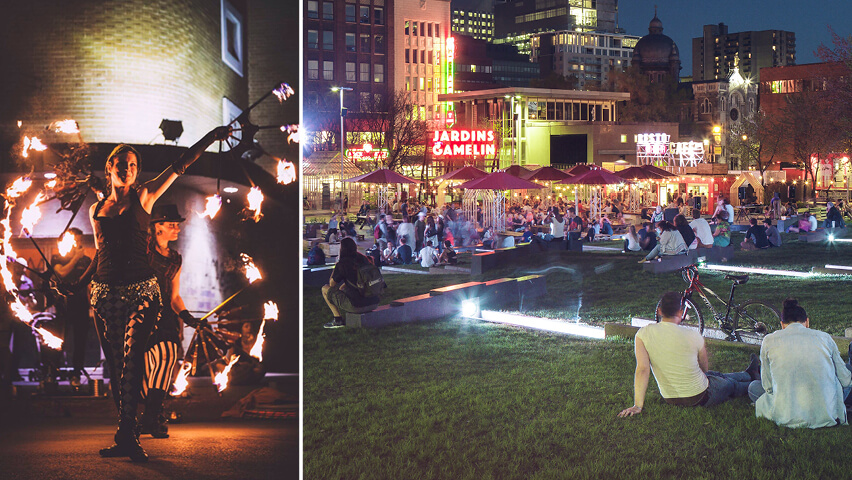 FREEDOM, SPONTANEITY AND THE OFF-BEAT TO TAKE CENTRE STAGE AT LES JARDINS GAMELIN

Montreal, July 31, 2018 – Starting on August 7, Les Jardins Gamelin will devote every Tuesday in August to its new series of public shows, Les Jardins en cabaret. Over four unique, magical evenings, this downtown Montreal crossroads will become an open-air cabaret that promises to be anything but humdrum! From 8:30 to 10 p.m., the stage will be set for amazing and astonishing performances that include artistic and circus numbers, variety acts, spoken word presentations, physical comedy and the performing arts, all presented by Montreal masters of the genres.

This madcap, carnivalesque and decidedly experimental cabaret will feature acrobatics, games, dance, juggling, fire-eating and several other art forms. The duo Les Dudes will be your hosts for this colourful cornucopia of circus-flavoured performances. To make this masked ball really special, spectators are invited to wear a costume! 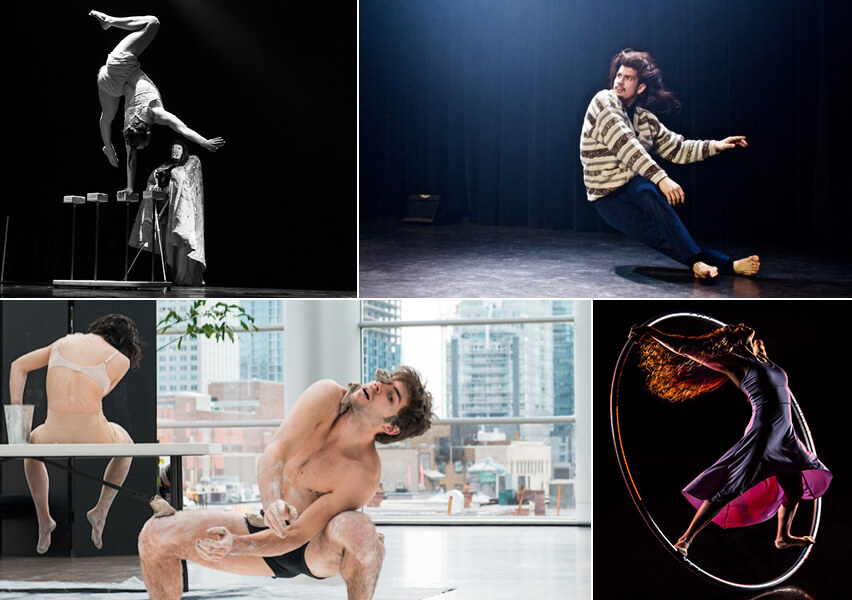 The Pride rainbow will shine bright in the sky as DJ and emcee Sandy Duperval presents her lineup of eclectic burlesque and variety acts. On the program: voguing, some hilarious stripteases and the Spice Drags’ unique musical parodies. Get ready to sing, dance and join in the fun! 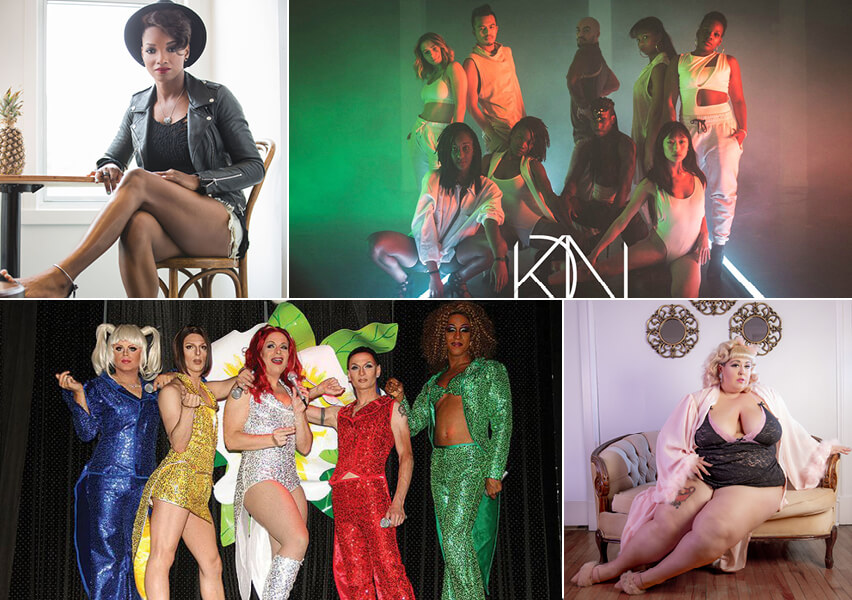 This intimate evening will pay tribute to the spoken and sung word in all its forms: from poetry to slam, from song to storytelling. Raw, gentle, funny, sensitive and hard-hitting in turn, the voices of so many poets and spoken word artists are rarely heard together. They are sure to lift your spirits and get you thinking. 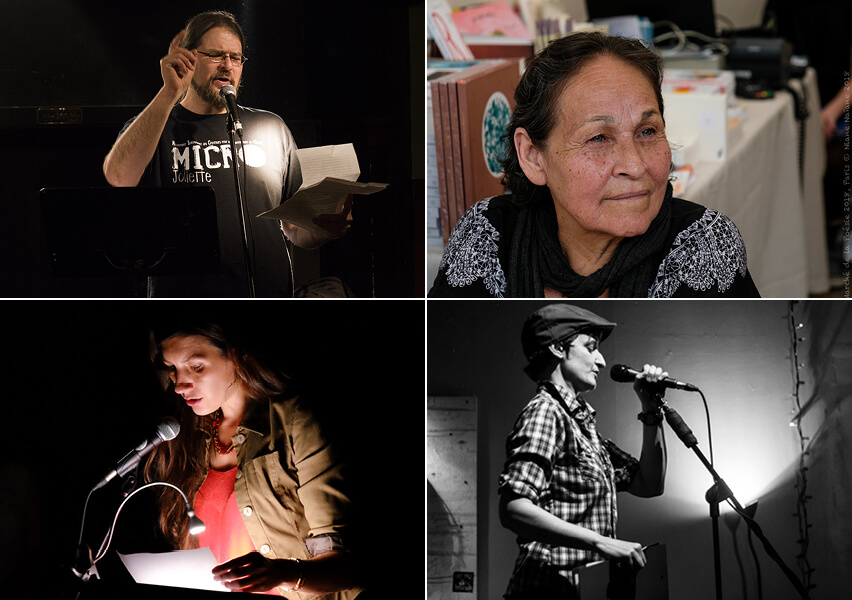 The talent and free spirits of wonderfully diverse artists take the spotlight in this surrealistic cabaret that pays tribute to human movement. Under the tutelage of Krin Haglund, your hilarious and exquisite host, the stage is set for an eclectic lineup of performances highlighting physical comedy and every undisciplined discipline of performance art you can name! 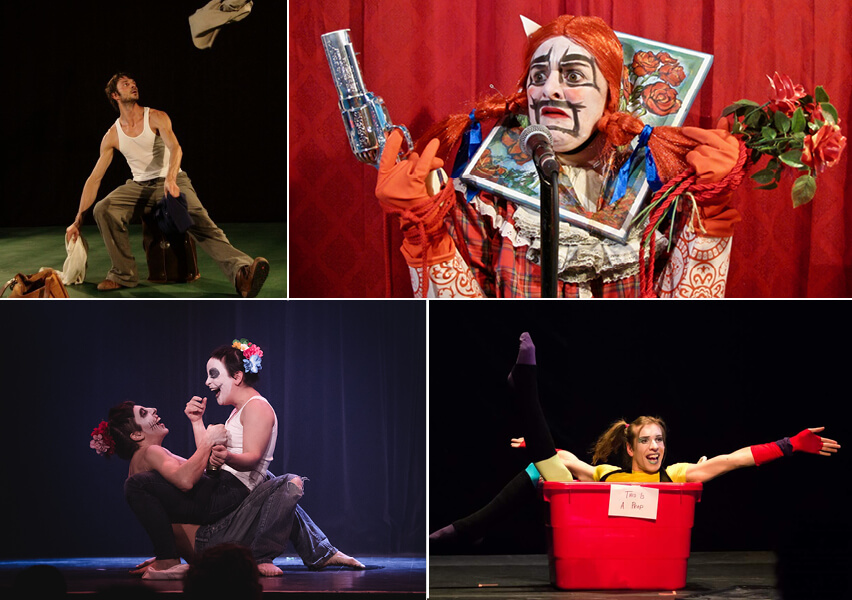 The setting of Les Jardins Gamelin, with its illuminated canopy, circular stage and friendly terrace, is ideally suited to the cabaret formula, making this the perfect new rendezvous for all Montrealers, families included. “We wanted these cabaret evenings to be a place for fun, freedom and a spirit of adventure, one where anything can happen. We are very proud to have brought together so many outstanding performers and artists’ collectives who are true masters of their art. They embraced the concept right away and created one-of-a-kind shows tailor-made for this venue. The result is an intimate cabaret-style experience that can be wild, wacky and profoundly moving,” said Pascale Daigle, programming director at the Quartier des Spectacles Partnership.

Every show will kick off with performances by DJ FunkyFalz, for the Cabaret Fierté and Cabaret Debout: Actes de parole, or DJ Speakeasy Electro Swing, for the cabarets Carmagnole à Gamelin! and Le Corps Dada aux Jardins de Phénomena. The terrace will be decked out in the trappings of a cozy cabaret, in a decor designed by Karine Galarneau. In keeping with the spirit of traditional outdoor dance halls, the site’s snack bar will be serving up Old Fashioned and Pink Ladies for the occasion.

A TREAT FOR THE EYES AND EARS

This August, homegrown cinema and music will also be in the spotlight. Presented by Radio-Canada with Québec Cinéma, Notre Cinéma aux Jardins will be screening three films under the stars between 9 p.m. and 11 p.m. on Fridays.

Another series, Les midis en chanson, will get under way in August. Every Friday from noon to 2 p.m., audiences will get to hear performances by talented singer-songwriters:

The Les concerts découverte series will be back on Fridays from 7 p.m. to 9 p.m. This popular series will feature musicians who have won competitions and received all kinds of musical honours.

Finally, the Les escales musicales series, presented on Thursdays from noon to 2 p.m. and again from 5 to 9 p.m., will provide a current snapshot of Quebec’s homegrown world music scene.

BAR AND SNACK BAR
Dominic St-Laurent and his team present an exclusive menu inspired by Quebec’s fast-food classics, including happy hour specials (5 to 7 p.m.) and a children’s menu.
Restaurant and bar service open seven days a week; Monday to Friday from 11 a.m. to 11 p.m., Saturdays and Sundays from 9 a.m. to 11 p.m.