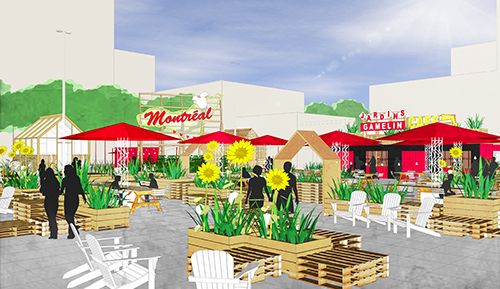 Montreal, March 31, 2015 – Place Émilie-Gamelin in the Quartier des Spectacles will have a new look for visitors to enjoy between May 7 and October 4. An original temporary arrangement, centred on multi-functional facilities, will be the setting for exciting cultural and citizen-led activities as soon as the warm weather returns. Les Jardins Gamelin is an initiative of an unprecedented scope for the site and is led by the Quartier des Spectacles Partnership with the help of many partners and the Ville-Marie Borough. The project is aimed at encouraging all Montrealers to use this public space in the heart of the city more often, with the ultimate goal of making the space one of the city’s tourist attractions.

To design the new layout, the Partnership commissioned Montreal-based Pépinière & co, known for its contribution to the successful Village Éphémère 2014. The new facilities will include repurposed shipping containers hosting bar and restaurant services, a large patio inspired by classic German beer gardens covered by a luminous canopy, a stage, and areas dedicated to urban agriculture and a local produce market.

This green, welcoming public space will be ideal for small and medium-size events. A charming location in the heart of downtown, it is sure to become a favourite spot for outdoor lunches or evening cocktails. By night, a luminous ambiance unique to the Quartier des Spectacles will complement the decor. In addition to the sculpture by Melvin Charney, which has been illuminated since last year, a new architectural video projection on a building adjacent to Place Émilie-Gamelin will be unveiled, as will a superb hanging illuminated work.

A program enriched by many partnerships

In addition to the elements produced by Pépinière & co and the Partnership, numerous partners have been invited to participate in animating the space. Long-time partners such as Montréal complètement cirque and Montreal Pride will return this year, and several other events will use the space for the first time, including the OFFTA live art festival, the Festival international de littérature and the Montreal Country Festival. Nearby institutions such as the Université du Québec à Montréal and Bibliothèque et Archives nationales du Québec will also contribute to the summer program.

The public is invited to the inauguration of Les Jardins Gamelin, which will also kick off the spring-summer programming season in the Quartier des Spectacles. On Thursday, May 7 starting at 5:30 p.m., a special cocktail reception will launch the season with activities, installations, DJs, food and much more.

The new arrangement will require major work to ensure that the Place will be ready for the public when the warm weather arrives. Place Émilie-Gamelin will be closed to the public from April 7 to May 7 in order to ensure a safe, efficient worksite. However, the northern part of the Place, which hosts a food distribution point for homeless people, will remain open throughout the setup period.

Place Émilie-Gamelin was inaugurated on the occasion of Montreal’s 350th anniversary. It is bounded by Berri, Saint-Hubert and Sainte-Catherine streets and De Maisonneuve Boulevard, and is one of six public spaces managed by the Quartier des Spectacles Partnership. Since 2010, the Partnership has been beautifying the space and presenting activities designed to attract more visitors. Over the years, the Partnership has installed new street furniture, added giant chessboards and presented low-key cultural programming.

The Partnership is a non-profit organization with some 60 members active in the Quartier des Spectacles. Its board of directors includes representatives from culture, education, business, the municipal government and local residents. Its team of approximately 20 permanent staff helps animate the Quartier des Spectacles by presenting cultural activities designed to complement the programming presented by the Quartier’s 80 venues and 40 festivals. The Partnership also manages the district’s public spaces and specialized equipment, illumination program and destination promotion.

Pépinière & co. is a non-profit organization whose mission is to promote, inspire and showcase creativity through urban projects – whether one-off, temporary or permanent – that encourage community involvement. Through its work, the organization seeks to bring more spontaneity to urban space by making creativity part of everyday life. Its achievements include the Village Éphémère 2014, in collaboration with the Association du design urbain du Québec, the Hivernale 2015 at the Olympic Park, and the Marché des ruelles.