Enjoy great movies with Downtown Screenings Under the Stars 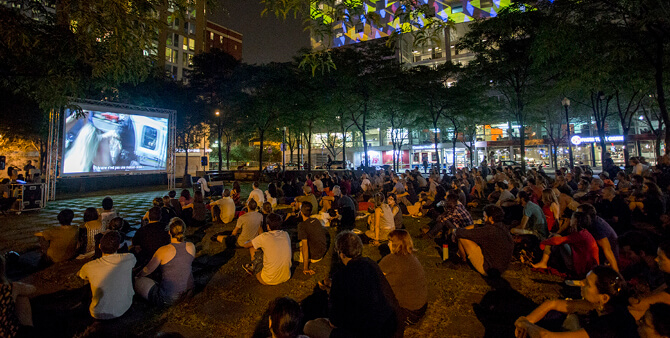 Montreal, June 14, 2017 - For the last 13 summers, the Society for Arts and Technology (SAT), in collaboration with the Quartier des Spectacles Partnership and the borough of Ville-Marie, has been delighting Montrealers and visitors with a well-chosen series of outdoor summer movies.

From June 12 to August 24, the weekly screenings will be held every Monday, plus every Thursday in August. Some of Montreal’s leading film event organizers will share their favourites, collectively building an eclectic and exciting program: everything from documentaries chosen by the RIDM to shorts courtesy of Prends-ça court! and classics from Films POP.

On June 12 the FIFA got things started on a jazzy note with The Devil’s Hornby Larry Weinstein, a fascinating look at the history of the saxophone, an instrument at times revered, and at times reviled for its allegedly lascivious character. To set the tone for the evening, saxophonist Benjamin Deschamps, the 2017-18 Révélation Radio-Canada jazz, perform with his trio.

Collectively, the 13 films in the series are a powerful, engaged set of works, ranging from the hilarious to the heartbreaking. For example, Cinema Politica will present Food Coop, the story of a cooperative supermarket in Brooklyn. Fans of superhero flicks and B-movies will love Fantasia’s spectacular retrospective, DJ XL5, as well as SPASM’s invitation to check out the classic Star Wars parody, Spaceballs. Next, the Montreal First Peoples’ Festival will present the indigenous hunters’ side of the sealing controversy with the documentary Angry Inuk. In August, a great summer for movie lovers will wrap with the latest film by Nicole Garcia, Mal de pierre, presented by Cinemania, and the Coen brothers’ No Country for Old Men, presented by the Festival du Nouveau Cinéma. The list also includes picks from programmers who have their finger on the pulse of the movie world: the Black Film Festival, KINO and the NFB.

DOWNTOWN SCREENINGS UNDER THE STARS

Place de la Paix, next to the SAT on Saint-Laurent Blvd., between Sainte-Catherine St. and René-Lévesque Blvd., in the Quartier des Spectacles.

Plus: Skate Jam Mondays are back; new video projections to discover

The essential get-together for skateboarders is back this summer, starting June 26. Every Monday until August 21, from 6 to 9 p.m., everyone is welcome to come out with their board, enter occasional competitions and have a barbecue.

In addition to big-screen movies in the park, the SAT has invited Dérapage to present several of its works on the façade of Hôtel Zéro 1. Every movie night, a different series of architectural video projections will be shown, bringing even more liveliness to the evenings.

All films will be shown in their original language, with French subtitles if necessary.