Downtown Screenings Under the Stars in Place de la Paix, in the heart of the Quartier des Spectacles

A bold program showcasing the diversity of Montreal’s film culture 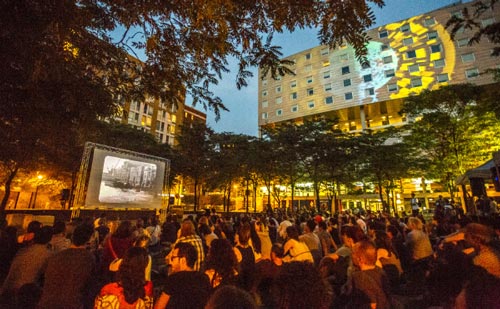 Montreal, June 3, 2015 – For the tenth year in a row, the Society for Arts and Technology (SAT) presents its free outdoor film series, Downtown Screenings Under the Stars, in Place de la Paix, in collaboration with the Quartier des Spectacles Partnership and the borough of Ville-Marie. Every Tuesday at 9 p.m., from June 9 to September 8 (excluding June 23), film lovers are invited to enjoy one of 13 free films. Each week, a local film organization will host Montreal’s most eclectic and adventurous outdoor film series.

Highlights include a celebration of the 30th anniversary of the classic movie Back to the future by Robert Zemeckis, presented by the SPASM festival of off beat genre films. The Montreal International Documentary Festival (RIDM) will screen a film that was a big hit at the Sundance and Berlin festivals in 2014, 20,000 Days on Earth by Iain Forsyth and Jane Pollard, which shows 24 hours in the life of the artist Nick Cave. Film Pop will present a rare 16 mm screening of the french version of Pinball Summer a.k.a. Pick-Up Summer (1980), the saucy, Quebec-made summer romp that marked George Mihalka’s filmmaking debut. Cinémania, the festival of French-language films, will present the biggest hit from its most recent edition, Sils Maria, directed by Olivier Assayas and starring Juliette Binoche and Kristen Stewart. After each week’s screening, Espace SAT will present special events with a musical program. In addition to movie nights, the Orchestre de la Francophonie, in residence at the SAT this summer, will perform a special open-air concert on Thursday, June 18.

Once again this summer, starting June 30, Skate Jam Tuesdays will precede the screenings at 6 p.m.

The summer program, organized by the SAT for nearly a decade, is the result of a desire on the part of the SAT, the Quartier des Spectacles Partnership and the borough of Ville-Marie to encourage Montrealers to embrace Place de la Paix. The initiative has helped transform the park into a hub for outdoor cinema. With time, it has become clear that sustained efforts to attract crowds to the space have led to a noticeable improvement in the park’s environment. This initiative is a testament to all three partners’ desire to encourage social diversity among park users and to make a positive contribution to the neighbourhood.

Downtown Screenings Under the Stars in Place de la Paix

Back to the Future by Robert Zemeckis
Presented by SPASM

In case of rain, screenings will be moved to the ground floor of the SAT.

Presented by the Society for Arts and Technology and the Quartier des Spectacles Partnership, in collaboration with the borough of Ville-Marie.

Source: Society for Arts and Technology and the Quartier des Spectacles Partnership