Humans at the heart of technology

Montreal, September 23, 2015 – Common Space? is a tour of eight new works displayed at various sites in Montreal’s Quartier des Spectacles from October 1 to 18, 2015. It is the outcome of a creative process that merges the talent of 13 artists from seven countries, as they explore the question of humans at the heart of technology. Contributors include: Michel de Broin (Canada), whose Molysmocène will be projected on the façade of Théâtre Maisonneuve; Sam Meech (United Kingdom), with We’re all friends here, a trio of works, at Place de la Paix and the UQAM Centre de design; artist Darsha Hewitt (Canada), in collaboration with Nelly-Ève Rajotte (Canada), who take the Goethe Institute by storm with their A Side Man 5000 Adventure; and Sébastien Pierre and Daniel Canty (Canada), who together created Les îles invisibles, an interactive rediscovery tour of the Quartier des Spectacles starting at the Saint-Laurent Metro station.

The works presented by the 13 artists participating in Common Space? were created in relation to the various locations and environment of the Quartier des Spectacles. Through technology, video projections and interactive tools, they set out to reconceptualise our perception of that environment, which rather than remaining a grouping of imposed structures becomes a pliable entity that can be changed through design and creation. Common Space? is an NFB, Quartier des Spectacles Partnership and MUTEK co-production, and is part of the much larger Human Futures project, produced with the support of the European Union’s Culture Programme.

In conjunction with Common Space?

To get the most out of the experience and navigate all the works, the public is invited to take guided tours led by the producers. On October 3, the project’s artists and producers will participate in a round table entitled “Interactive Art in the Public Space: The Common Space? Project,” as part of Human Futures, during the MUTEK_IMG forum on current practices in digital creation at the PHI Centre. 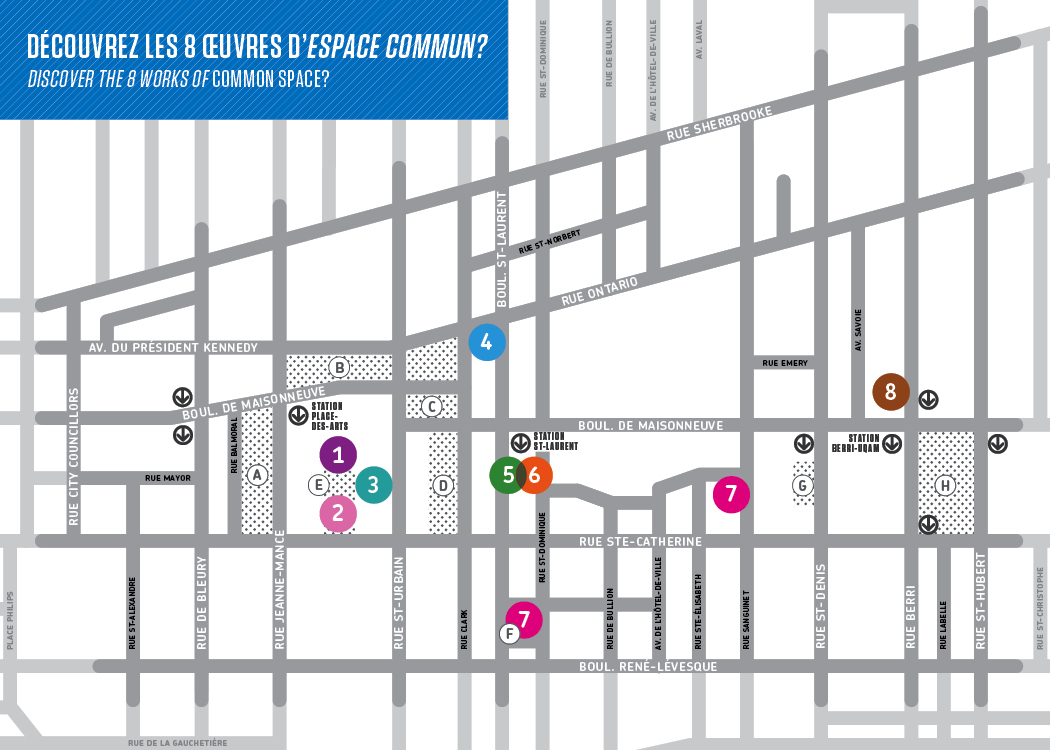 Brief descriptions of the works presented in the Common Space? project

This electromechanical sound sculpture is made from a thousand mirror disks that revolve around a central axis to create a delicate symphony. Simply stand in the centre of the circle to experience music like you’ve never heard it before. Surrounded by sound, you’ll feel entirely cut off from the world—while standing right in the middle of a public space.

We are constantly bombarded with images and information, surrounded by media and hyper-connected to the world. Everything we see and hear remains stored in our memory, affecting it in countless ways. End of Broadcast is an interactive installation representing a brief moment of disconnection, where the only way of staying connected is through memories. Move your hands in front of the screen to see video fragments that you can control with your movements. This need for interaction is a metaphor for our inability to disconnect.

The Wurlitzer Side Man 5000, created in 1959, is the oldest “beat box” and heaviest portable musical instrument in the world. Darsha Hewitt explores the aesthetic and innovative potential of reviving the Side Man by presenting this fascinating machine along with tutorial videos explaining how it works. Meanwhile, Nelly-Ève Rajotte offers a lush and immersive multi-projection experience that exposes the complex and unique workings of the Wurlitzer Side Man 5000, accompanied by a composition of sound bites from this instrument.

Did you know your mobile phone is constantly talking behind your back? Without any action on your part, it emits a surprising amount of information into the environment. Unintended Emissions captures, dissects, uses and maps—in real time—the involuntary and invisible emissions of our mobile devices.

Rediscover Montreal with this interactive tour. Using your smartphone as a compass, decode 72 fragments of a hidden history by exploring the 16 sites of the Quartier des Spectacles, and reconstruct the past, present and future. Consult the map of the area, follow the symbols to reach the different sites and look around: codes on the ground will reveal snippets of history. To begin the experience, locate the Îles invisibles terminals in the Quartier des Spectacles and follow the instructions.

Sam Meech presents a series of works reflecting the experiences of downtown Montrealers and casts a critical eye on the role of the arts in a changing urban environment. Through interviews and a visual search of the Quartier des Spectacles, he records and creatively reimagines the ideas, experiences and iconography of those who live there, in the form of traditional jacquard knits. At Place de la Paix, participate in Crossed Lines, a reactive knitted wave that visually represents these interviews. Listen to them from a phone booth, and leave your own message; your voice will join the others in the knitting on the projection’s facade. Then notice the banner signs all around you that were created in collaboration with Marilène Gaudet, featuring details taken from the neighbourhood’s iconography. At the UQAM Centre de design, view Ceci n’est pas un spectacle, a “knitted movie” that translates the ideas and experiences gathered during the interviews into patterns, symbols and statements that appear in glorious low-resolution knitted form.

In the summer of 2012, Yahoo’s Voice service was hacked and a collective by the name of D33Ds dumped its entire database on the Internet, including 450,000 user passwords. This public exposure of what are normally secret passwords raises questions about our online lives.

Schedule for the Marquee of Place des Arts (2)

Specific schedule for the Goethe Institut (4)

Activities during MUTEK_IMG with the artists of Common Space?

The Quartier des Spectacles is Montreal’s cultural heart, boasting North America’s most concentrated and diverse group of cultural venues. The district is the year-round host to countless festivals and events, many of which include free outdoor shows and activities. The Quartier also hosts innovative urban installations involving cutting-edge lighting design, immersive environments or interactive digital spaces. The Quartier des Spectacles is an international showcase for new multimedia technology, making Montreal a global leader in the urban exhibition of digital content. For more information, visit quartierdesspectacles.com.

The National Film Board of Canada (NFB) is one of the world’s leading digital content hubs, creating groundbreaking interactive documentaries and animation, mobile content, installations and participatory experiences. NFB interactive productions and digital platforms have won 100 awards, including 11 Webbys. To access acclaimed NFB content, visit NFB.ca or download its apps for smartphones, tablets and connected TV.

MUTEK is a Montréal based organization dedicated to the exploration and promotion of digital creativity and electronic music. Launched in 2000, its central platform is its annual festival in Montréal, which has become an essential North American reference point for international artists, industry professionals and diverse audiences. MUTEK also maintains activities around the world, including annual events in Mexico City, Barcelona and Bogota. Conceived as a complementary event to its festival in the spring, the first MUTEK_IMG was introduced in 2013 as a forum that emphasizes visuality in the digital creation milieu, and rallies both artists and professionals. The 2nd edition of MUTEK_IMG will take place from October 1 to 3 at the Phi Centre, Montréal. The 17th edition of the MUTEK festival will take place from June 1 to 5, 2016, in Montréal. mutek.org