IMPULSE A PARTICIPATORY PUBLIC ARTWORK TRAVELS FROM MONTREAL TO CHICAGO 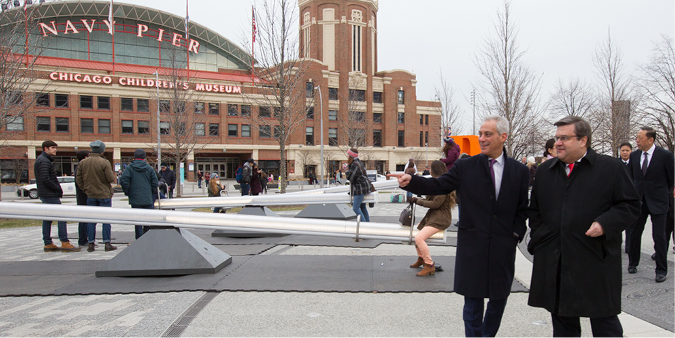 Montreal, March 14, 2016 - Impulse, the interactive work comprised of a series of giant illuminated seesaws, is shining internationally once again. The playful installation had its inaugural presentation in the Quartier des Spectacles for the annual Luminothérapie winter event last year, followed by stops in London, Brussels, Lugano and Scottsdale, Arizona. It will now be installed in Chicago’s Polk Bros Park at Navy Pier, the popular attraction on the shores of Lake Michigan.

During a visit to Chicago for the Urban Waterways Forum, the mayor of Montreal, Mr. Denis Coderre, joined the mayor of Chicago, Mr. Rahm Emanuel, for a visit to the now famous installation, which children and adults will enjoy until May 21 this year. “Works like Impulse put Montreal in a favourable light and help build its image as a networked city open to the world, bolstering its position as a cultural metropolis and UNESCO City of Design. I thank my counterpart, Chicago mayor Rahm Emanuel, and Navy Pier for their warm hospitality. I also want to thank the Quartier des Spectacles Partnership for helping our city and its creative talent stand tall on the world stage,” said, Mr. Coderre, the mayor of Montreal.

“The export of our works helps us build new relationships with cities that share our appreciation for interactive installations and new experiences for public spaces. We have seen that the model adopted by the Ville de Montreal and the Partnership for the design and animation of public spaces is providing inspiration for cultural districts around the world. That is a very exciting development for artists and the public,” said Pierre Fortin, executive director of the Quartier des Spectacles Partnership.

Created by Lateral Office and CS Design in collaboration with the Quartier des Spectacles Partnership, Impulse features a series of giant seesaws that change appearance when in use. The seesaws are fitted with LED lights and speakers that produce a sequence of lights and sounds resulting in an ever-changing composition. Impulse embodies the ideas of serialism, a technique using the repetition and variation of musical elements to produce zones of intensity and tranquility.

“The Impulse installation at Navy Pier blossomed out of a chance conversation during my time at the Global Cultural Districts Network (GCDN) meeting in Brooklyn last May. After meeting with the Quartier des Spectacles Partnership, we realized it was a perfect opportunity to showcase and share this incredible work of art,” said Michelle T. Boone, Chief Program and Civic Engagement Officer of Navy Pier. “Impulse complements the Pier’s new programmatic vision of offering unique, cultural experiences for our guests. We are thrilled to bring this project to Chicago's lakefront treasure, and look forward to continuing the relationship with GCDN to potentially bring other engaging creations to Navy Pier.”

Impulse’s remarkable series of presentations around the world is the result of the Quartier des Spectacles Partnership’s promotional work with international networks. The Partnership is always making new connections with cultural cities, and is a member of major international associations such as the Connecting Cities Network, Lighting Urban Community International (LUCI) and the Global Cultural Districts Network (GCDN), an association of cities committed to sharing their experience and expertise in the management of cultural districts.

Adrian Ellis, director of the GCDN, expressed his excitement about the partnership. “We are thrilled to see these kinds of international collaborations taking place among members of the GCDN. We see that members find value in the kinds of connections available through being part of the Network and we look forward to many more in the future. The successful animation of public space is central to the success of a cultural district as a whole. It’s wonderful to see two GCDN members collaborating on a project specific to this topic.”

Located on Lake Michigan, Navy Pier is the top-attended leisure destination in the Midwest, stretching more than six city blocks and welcoming more than nine million guests annually. Originally opened in 1916 as a shipping and recreation facility, this Chicago landmark showcases more than 50 acres of parks, restaurants, attractions, retail shops, sightseeing and dining cruise boats, exposition facilities and more. In 2017, Navy Pier continues to celebrate its centennial with a series of special events and programming, year-round rides on the Centennial Wheel and ongoing pier-wide redevelopment efforts as part of the Centennial Vision. Navy Pier, as a nonprofit organization, maintains and manages the 50-acre pier that is being redeveloped as a contemporary, environmentally responsible urban space. More information is available at www.navypier.com.

About the Global Cultural Districts Network

The Global Cultural Districts Network (GCDN), an initiative of AEA Consulting, is an international membership-based network that fosters cooperation and knowledge-sharing among those responsible for planning and running districts and clusters that include a significant cultural element. The GCDN provides a context for cultural leaders to discuss emerging best practice across a range of issues related to the successful creation and management of cultural districts and cultural planning around the world.

The GCDN holds two conferences annually held in major cultural capitals around the world. These unique gatherings provide an intimate context for leaders to hear expert panels, candidly share their experiences, and discuss the place of cultural and creative districts in urban policy, economic development, travel and tourism, placemaking, and related areas of public policy. More information is available at www.gcdn.net.

The Quartier des Spectacles Partnership, founded in 2003, is a non-profit organization that manages, animates and illuminates public spaces in the Quartier des Spectacles, and promotes the district as a must-visit cultural destination. It hosts, produces and exhibits innovative installations involving cutting-edge lighting design, immersive environments and interactive digital spaces.

As a showcase for new multimedia technologies, the Quartier des Spectacles positions Montreal as a global leader in the exhibition of digital content in urban settings. The Partnership is a member of several international networks, including the Connecting Cities Network, Lighting Urban Community International (LUCI) and the Global Cultural Districts Network. It is supported by the Ville de Montréal and the Secrétariat à la région métropolitaine of the Ministère des Affaires municipales et de l’Occupation du territoire.