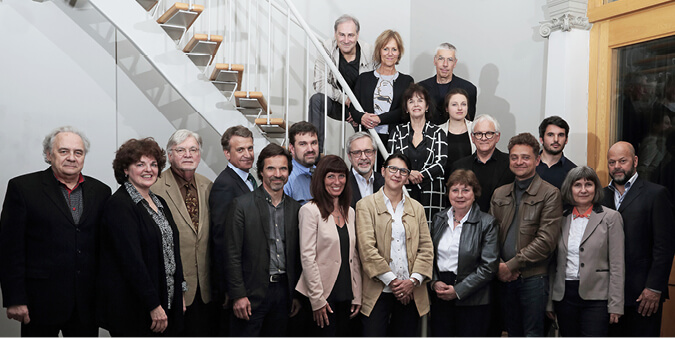 Montreal, April 27, 2017 – The Quartier des Spectacles Partnership is proud to introduce the directors and officers who will serve on its board of directors for 2017-18, following an election at its annual general meeting held on April 26 at the Bon-Pasteur Historic Chapel.

The Partnership’s board is composed of directors from a variety of sectors active within the Quartier des Spectacles. The Partnership helps the district’s main stakeholders coordinate their activities and work together. Eight directorships were open in two categories: cultural and socio-economic.

The two positions for members from a business association, the tourism industry, or institutions, companies and organizations in fields other than business were filled by acclamation: Arnaud Larsonneur (CIBL) and Michelle Llambias Meunier (Chamber of Commerce of Metropolitan Montreal).

The composition of the 2017-18 board of directors is as follows:

• one (1) director elected from among the members of a residents’ association or community organization active in the Quartier des Spectacles;

These first three categories account for the 14 directors elected at the annual general meeting. The other directors are:

• two (2) directors from the cultural sector, appointed by the Board of directors.

These directors are members of organizations that produce a major performing arts event taking place primarily within the Quartier des Spectacles and whose programming generates at least one million annual admissions to outdoor and indoor venues:

• two (2) directors, one each from two public institutions that play a unique and essential role in the educational and cultural development of the Quartier des Spectacles,

• three (3) directors appointed by the Board for their expertise and experience in a specific field:

Jacques Primeau was re-elected as chair of the Board of Directors, a position he has held since 2012. Vice-chair Lorraine Pintal, who has also served for the last five years, was also re-elected. Martin Galarneau was also named vice-chair. Monique Goyette, former vice-rector of administration and finance at UQAM, will return as treasurer, and general secretary Suzanne Raynault will also continue in her role. Suzanne Laverdière, director of culture and heritage for the Ville de Montréal, will continue to attend Board meetings as an observer, as will Guy Charbonneau (borough of Ville-Marie), Stéphane Ricci (Ville de Montréal) and Hélène Binette (Ministère de la Culture et des Communications du Québec).

The Partnership congratulates the newly elected directors and thanks everyone who stood for election. Over the course of the year, several directors left the Board. We extend our sincere thanks for their much-appreciated service: Agathe Alie (CIBL), Christiane Barbe (Bibliothèque et Archives nationale du Québec), David Lavoie (festival TansAmérique), Jean-Philippe Roy (Just For Laughs), Alexandre Taillefer (Musée d’art contemporain), Marc Turgeon (UQAM) and Marie-Pier Veilleux (Chamber of Commerce of Metropolitan Montreal).

During the general meeting, executive director Pierre Fortin presented a summary of the year’s activities. In 2016, participatory public art was an extremely popular attraction, and the model implemented by the Quartier des Spectacles Partnership for animating its public spaces sparked genuine enthusiasm among the organization’s international contacts. Four original works by local artists, produced by the Partnership, were presented outside Quebec and entertained audiences in North America and Europe; our works were rented for a total of 170 days.

Large numbers of Montrealers and tourists visited Les Jardins Gamelin in 2016. From May to October, the Jardins gave the public 154 days of daily animation and 270 cultural and citizen-focused activities, along with special events and festivals. Les Jardins Gamelin appealed to a wide spectrum of audiences while staying true to its mission of promoting peaceful coexistence and inclusivity. This major project met its ambitious goals thanks to the exceptional contributions of several partners, including the Ville de Montréal and the borough of Ville-Marie.

The year also featured the launch of a major data pooling project involving more than 20 event producers and venues in the Quartier. The initiative was made possible by the generosity of a Montreal-based company, AIMIA. The project’s first tangible results and projects will emerge in 2017.

The Partnership’s 2016 activity report is available here (in French only).

The Quartier des Spectacles is Montreal’s cultural heart, boasting North America’s most concentrated and diverse group of cultural venues. The district is the year-round host to countless festivals and events, many of which include free outdoor shows and activities. The Quartier hosts innovative urban installations involving cutting-edge lighting design, immersive environments or interactive digital spaces. Year round, the Quartier presents artistic video projections on several building façades.  The Quartier des Spectacles is a showcase for new multimedia technology, making Montreal a global leader in the urban exhibition of digital content.

The Quartier des Spectacles Partnership, founded in 2003, is a non-profit organization with more than 60 members active in the district. It is responsible for animating the Quartier des Spectacles by programming cultural activities, managing and animating public spaces, providing distinctive illumination, and promoting the Quartier as a must-visit cultural destination. The Partnership is supported by the Ville de Montréal and the Secrétariat à la région métropolitaine.